Presidential nominees battle it out in second debate 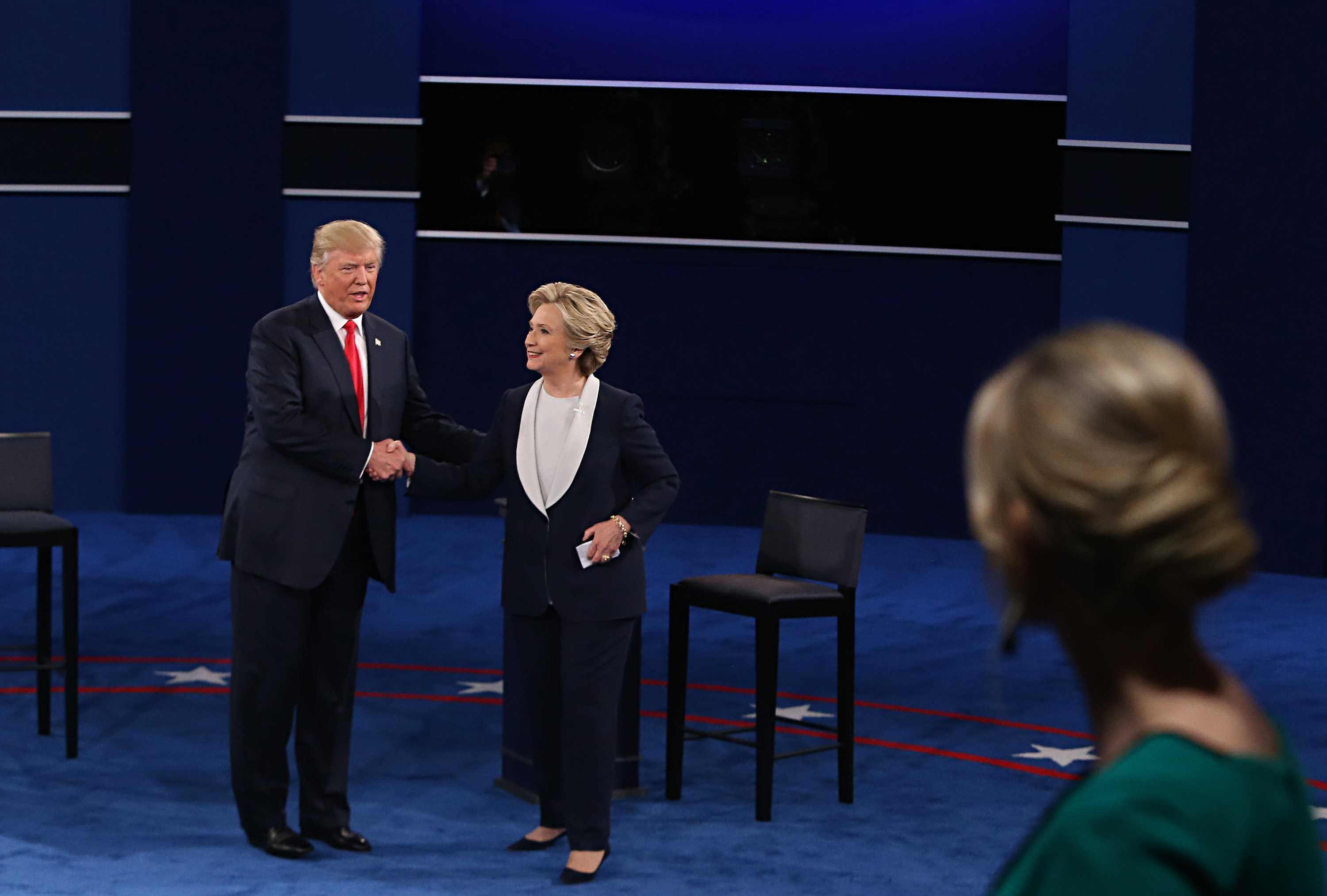 Donald Trump and and Hillary Clinton shake hands on stage after the second debate between the Republican and Democratic presidential candidates on Sunday, Oct. 9, 2016 at Washington University in St. Louis, Mo. (Christian Gooden/St. Louis Post-Dispatch/TNS/MCT)

A bitter election cycle led both candidates to stiff each other on handshakes starting the second presidential debate between Hillary Clinton (D.) and Donald Trump (R.) on Sunday night.

Coming off of a weekend plagued with hot-mic footage from 2005 of the Republican presidential candidate using disturbing language about groping women, Trump had to re-sell himself to voters amidst waning support from Republican leadership.

Clinton capitalized early on as the first question from the debate moderators asked Trump about implications of his demeaning attitude expressed in the footage.

Trump then pivoted to how he would destroy ISIS should he become president and voiced how he wanted to move onto more pressing issues voters would likely be concerned about.

“Well, like everyone else, I’ve spent a lot of time thinking over the last 48 hours about what we heard and saw,” Clinton said. “You know, with prior Republican nominees for president, I disagreed with them on politics, policies, principles, but I never questioned their fitness to serve. Donald Trump is different.”

Sitting in the front row of the audience were multiple women invited by Trump who have raised sexual assault allegations in the past against former President Bill Clinton.

Behaving sluggishly for the first 20 minutes, Trump eventually gathered some intensity and began digging into Hillary Clinton’s past scandals —appeasing his core of loyal voters in the process.

The 33,000 deleted emails, Clinton’s position as Secretary of State during a deadly attack on a U.S. diplomatic compound in Benghazi, Libya, and what he views as 30 years of ineffectiveness during her time in public office, were some of his major digs at the Democratic nominee.

Trump even warned her that should he become president, he would open further investigation into her handling of using a private email server.

“And I’ll tell you what, I didn’t think I’d say this, but I’m going to say it, and I hate to say it,” Trump said. “But if I win, I am going to instruct my attorney general to get a special prosecutor to look into your situation, because there has never been so many lies, so much deception.”

“Because you’d be in jail,” said Trump when Clinton noted how she preferred that someone with Trump’s temperament not be in office.

The FBI did not find any evidence that Clinton intentionally deleted emails, but did call her email use “extremely careless.”

Clinton didn’t spare much time before she began laying out controversies involving Trump, including other derogatory comments aimed at women, his beneficial use of the tax system, and alluded to the possibility of close ties with Russia and the country’s president, Vladimir Putin.

Trump said he has paid hundreds of millions of dollars in taxes and does use the current tax code to his benefit. He also denied having a close relationship with Russia and Putin.

Moments of substance and policy discussions were available amid the questioning of each other’s character.

Trump offered a tax plan that would get rid of carried interest and decrease the tax rate from 35 percent to 15 percent.

Clinton claimed she will not raise taxes for anyone making less than $250,000, a surcharge on those making over $5 million, and defended how she tried to close corporate tax loopholes as a senator.

Trump vowed to repeal the Affordable Care Act that was initiated under President Obama and suggested making the health insurance industry more competitive.

Hillary warned against the repeal of the Affordable Care Act.

Trump stated how he was for alternative forms of energy, but reassured that natural gas and coal are still more viable sources.

Hillary said she would like to move toward more clean and renewable energy sources to help combat climate change and noted how natural gas has been that link for moving forward.

She also urged that she would help transition coal workers as a result of moving away from coal as a major source of energy.

Clinton offered to target ISIS leadership, arm Kurdish Peshmerga fighters, and supported the use of special forces in Iraq.

Trump touted the idea of not publicly notifying ISIS leadership of military plans for defeating the terrorist group.

Clinton proposed no-fly zones and safe zones to deter Putin from supporting Syrian President Bashar al-Assad and using it as leverage to negotiate with Russia.

She also recommended investigating the Syrian and Russian government for war crimes, and is against deploying U.S. ground troops to Syria.

Trump disagreed with his running mate Mike Pence, who believes the U.S. should be prepared to act militarily against the Assad regime should Russia continue its use of airstrikes.

The night ended with a handshake between the two as they were both asked from an undecided voter to share something they respect about one another.

Trump said he respected Clinton’s ability to not quit and to keep fighting for her beliefs.