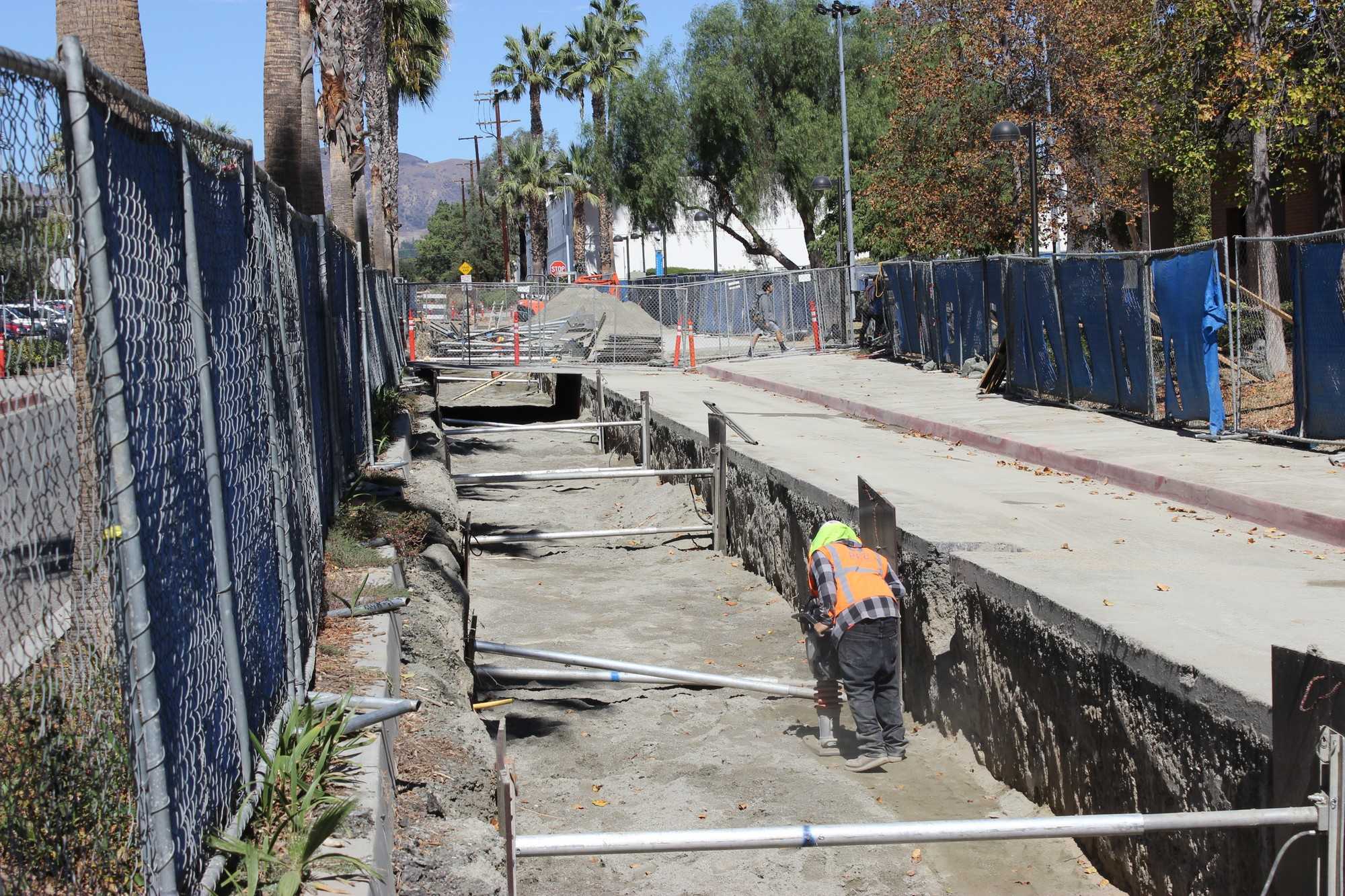 Gutted streets and redirected walking paths may be disrupting some campus goers, but construction efforts around CSUN are making sure students and university employees have access to heated buildings and warm water.

Construction workers on Etiwanda Avenue and West University Drive are working under the streets to replace pipes intended to direct water from CSUN’s central heating and hot water plant, according to university officials.

Pipe replacement has been occurring in phases focusing on different sections of the campus, said Rosenthal.

The construction, which started in 2015, is targeting areas of campus where pipes are most vulnerable.

According to Rosenthal, the vulnerability is the result of bell and spigot piping that was placed underneath campus approximately 20 years ago.

“Essentially the piping rusted at a higher rate than anticipated,” Rosenthal said.

Rosenthal also explained that the piping was expected to last around 40 years, but due to a jacket around the piping holding in leaking water and insulation around the jacket creating an acidic environment, the pipe would rust at a faster rate.

The stretch of construction that is intermittently spread out along the west side of campus is not easy to miss.

“Mostly because where we hang out a lot it is very noisy,” Andrew Orozco, 21, a business management major, said. “For as long as I can remember they have always been doing road work.”

Anna Reagan, a 28-year-old graduate student in the history program views the construction as a more than just a benefit to campus, but also in some ways making the campus more secure.

“I haven’t felt that it’s unsafe,” Reagan said. “If anything I think it’s been a few times where I’ve walked out of class when it’s darker and there’s been some lighting from [the construction] that made me feel a little safer.”

The replacement effort, which consists of welded steel piping, is estimated to cost $13 million to $15 million, according to Rosenthal.

However, there is no official estimation as to when the replacement will be finished.

Rosenthal said the department is still trying to bid out the next phase of pipe replacement due to the availability of funds.

“I don’t know if the funding is going to come in,” Rosenthal said. “Right now we have enough funding for that phase 2-1, but we don’t have a secure funding for phase 2-2 and 2-3, and certainly not for the third phase and its subsequent phases.”

The project is designed to be completed in three phases, which allows every building to be fed by the piping system in two directions even if a section of campus is being worked on, according to Rosenthal.

The CSU Chancellor’s Office conducted a critical infrastructure analysis and survey from 2013-2014 that gathered information on each campuses’ most vulnerable infrastructure, said Rosenthal. The office has been putting together bonds at a systemwide level to fund the operations.

The water outage that occurred in September was an unrelated incident not from the bell and spigot piping. A waterline break occurred after a valve came loose, flooding Jacaranda Walk.

The heating and hot water system was one of those issues identified, along with an electrical distribution system that consists of an electrical transformer and switchgear that has been part of the campuses’ original buildings since 1958, according to Rosenthal. Plans are being developed to install a new system.

Approximately 3-5 pipe failures occur a year on CSUN due to the bell and spigot piping, especially as temperatures begin to drop during the fall semester, according to Rosenthal.