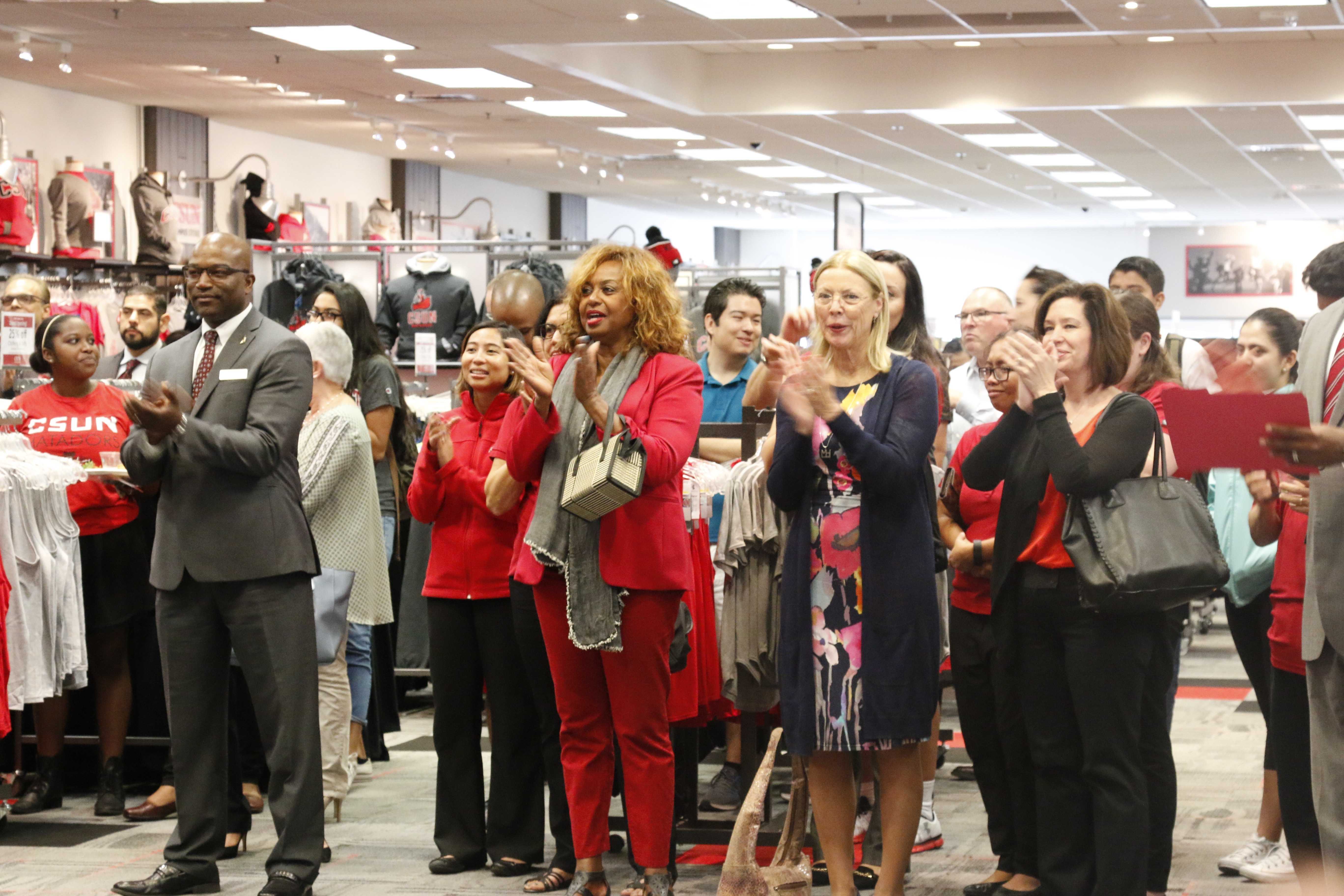 For the past couple of months, students have walked into a bookstore that appeared to be under construction, until Tuesday morning, CSUN finally hosted a grand-reopening of what used to be the Matador Bookstore.

A live event was held in the bookstore complex to celebrate the new beginning of what has become the Campus Store.

“It is no longer just about books,” said President of CSUN Dianne F. Harrison, “The CSUN Campus Store is a part of every matador’s career.”

A long red carpet laid flat along the building’s entrance pathway. An instrumental band was positioned at the side. The CSUN Campus Store Facebook account had also advertised a 3-day-long event full of discounts, games, giveaways, and snacks accompanied with refreshments.

The crowd of students and staff began to eat at 10:30 a.m., followed by speeches at 11.a.m, and ribbon cutting shortly after.

In a short speech, Robert L. Scholl, senior vice president of retail operations, acknowledged that the CSUN Campus Store is one of the few universities to offer full services Apple repair.

The Freudian Sip located next to the CSUN Campus Store was further remodeled and integrated by ridding of a wall and adding more seats and tables.

“It has been an absolute honor serving you,” said Robert L. Scholl, senior vice president of retail operations. “We look forward to your feedback.”

Freshman student, Sarah Berkman, wasn’t aware of the event before heading to the campus store.

“I just had to get a sweater,” she said, “but we saw the dancers, and that was good.”

In another short speech, Director of Intercollegiate Athletics, Dr. Brandon E. Martin, claimed CSUN is the first public university on the West Coast to have a partnership with Under Armour to be the exclusive outfitter and supplier of CSUN Athletics.

“Every time you walk into the [campus store] you become part of the vision, goals, and standard of excellence we have set – for all matadors,” said Martin. “When you wear a red CSUN t-shirt, a red baseball cap, or CSUN jersey on campus, wear it with pride.”

While some students supported this event, others were not convinced that remodeling the bookstore was necessary.

Celeste Garcia, a sophomore student said, “I think it’s nice that we have these events. It’s great promotion for the bookstore. [Students] go (to the campus store) for the first two weeks, then we forget about it.”

Alex Resendiz, a graduating senior, has seen the bookstore’s changes since 2012.

“It’s nice to see that we’re renovating the campus and that tuition money is being spent here,” he said.

Brandon Thorson, a freshman student, said “I don’t really see a difference. Usually, when we have a red carpet outside, you would expect more of a change.”