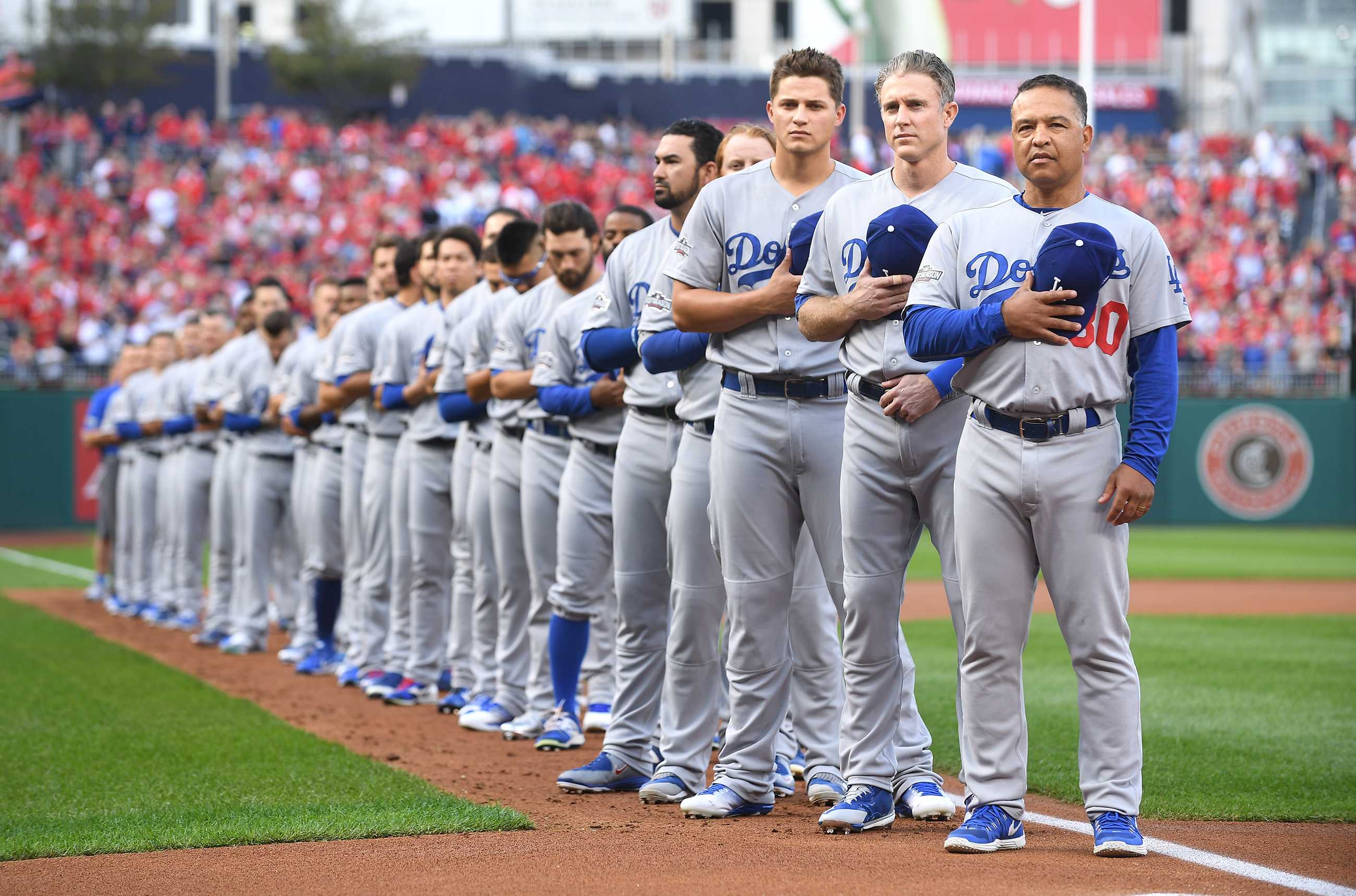 The Los Angeles Dodgers, including manager Dave Roberts, right, stand for the national anthem before facing the Washington Nationals in Game 1 of the National League Division Series at Nationals Park in Washington, D.C., on Friday, Oct. 7, 2016. The Dodgers won, 4-3. (Wally Skalij/Los Angeles Times/TNS)

It all comes down to a decisive Game 5. Either win or have a long flight back to Los Angeles to ponder what could have been.

The 2016 Los Angeles Dodgers have had a roller coaster of a season, leading the MLB in injuries, and it only makes sense that a team that has refused to die all season long, was able to force a Game 5 after losing two straight games to the Washington Nationals.

With a 6-5 win Tuesday over the Nationals, the Dodgers will face a Game 5 in the Divisional Series for the second year in a row. Dodgers’ fans at CSUN are optimistic about their team’s chances, but are also weary due to the team’s recent playoff performances.

“I’m very excited for game five. I’m a little bit worried just because games three, four and two weren’t great showings,” Ian Dahlquist, CSUN student and Dodgers fan, said. “Game one I thought we did a great job, after that I thought the bats just disappeared and if we do get past the Nationals I do believe we have a pretty good chance against the Cubs.”

The Dodgers finished the regular season having won their division for a fourth-straight year, but have yet to make it past the divisional round since 2013.

The team is in a familiar position as they were able to force a Game 5 in last year’s Divisional Series to the New York Mets with Clayton Kershaw on the mound as well, eventually losing Game 5, 3-2, and the series. The team and its fans are hoping history does not repeat itself.

“I just want to see us win game five,” said CSUN student Megan Trembly. “We have to take it one game at a time and this one in front of us is a big one.”

The starting pitcher for Game 5 for the Dodgers will be Rich Hill, a player acquired Aug. 1 in a trade with the Oakland A’s along with outfielder Josh Reddick. Hill, who has only been with the team for a little over a month, had a good last month of the season, but was roughed up in Game 2 of this series, giving up four earned runs in a 5-2 loss.

Christopher Perkins, a Dodger fan who works near the stadium has faith they can pull it out this time around.

“We have been through a lot this year,” Perkins said. “Experts have been counting us out all year and we’ve come out on top, even when our best pitcher was out we played some of our best ball.”

The first pitch for Game 5 will be Thursday at 5 p.m. at Nationals Park.