Matadors finish in a 1-1 draw against rivals 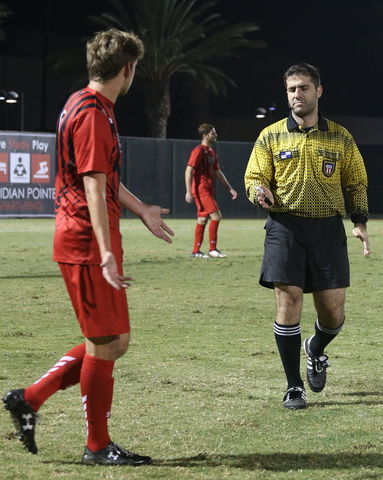 Sophomore midfielder Jules Cailliau argues the foul called against him for a tackle in Matador Stadium, October 12, 2016. Photo Credit: Max Zeronian/ The Sundial

The Matadors and Cal State Fullerton Titans played to a 1-1 overtime draw in 120 minutes at Matador Stadium.

The Matadors returned home after enduring a two-game losing streak. They were looking to continue putting pressure on UC Riverside and keep the Titans from overtaking them for second place.

Aside from being a Big West Conference game, it was also the first ever Pride Night where students received shirts in support of the night and brought attention to the awareness that fan acceptance was important to the athletics program.

In the first half the game, there was a back and forth affair as both teams looked to control the ball and flow.

Defenses were tested as both teams looked to stop any attack. The Matadors defense looked second best with keeper Kevin Marquez being called into making plenty of saves to keep the game alive.

When asked about his and the team’s performance, Marquez said it felt good to get the saves and help the team.

“This is a big point, Fullerton is not a bad team,” Marquez said. “They were the Big West champs the last two years in a row. We showed we could compete with them.”

The second half of the game is when all momentum changed and Titans took control of the ball.

In the 63rd minute, the Matadors found themselves losing when the Titans attacked through the right side of the field. They sent a pass into the heart of the box where defender Alex Heilmann put the ball out of Marquez’s reach.

The night got even more complicated in the 66th minute when forward Papi Diouf was sent off the field with a direct red card for sliding with both feet and cleats up.

This was Diouf’s first game back, which he had to play with a face mask, after recovering from a facial bone injury.

According to NCAA rules, when receiving a red card, a player could be suspended for one additional game.

The titan player, who did not appear to be touched in the slide, sold both the referee and fourth official into giving the card leaving the Matadors with 10 players on the field.

The Matadors did not fold and showed some character in taking possession of the ball in looking for an equalizer.

Matadors coach Terry Davila compared his team’s performance after the red card to the Rocky Balboa mentality, they needed to be punched to get going.

“To come back with ten men and tie it up at 1-1, says a lot about our character. I’m very proud and happy for them,” Davilla said.

The Matadors saw the Titans defense fail to clear the ball letting midfielder Juan Fernando Samaya and midfielder Jules Cailliau send a pass to forward Bar Shem Tov, who shot the ball into top left corner for his second goal this season.

When asked how it felt to be the hero of the night, he said he wasn’t.

“We have a great team behind me and they helped me. They all deserve credit for this result,” Shem Tov said.

After the Matador goal, the Titans went forward again and had three chances but were unable to get past Marquez.

He made a crucial save when his defenders were beat and he was in another one on one situation where he stopped the Titan forward’s shot.

Marquez was able to stop a rebound header and again saw a third block from another shot which led to his defenders finally sending the ball out of their box.

In the extra twenty minutes of overtime, Marquez made some impressive saves as the Matadors dominated the first 10 minutes but were unable to get more than one shot on goal.

In the second 10 minutes, both teams seemed content with the tie as players looked fatigued. Marquez was called on to stop one shot from over 25 yards and preserve the tie.

The Matadors, down a man, were able to earn a draw against the Titans.

The Matadors’ next game is against UC Irvine at home on Saturday, Oct. 15.