A How to on Voting 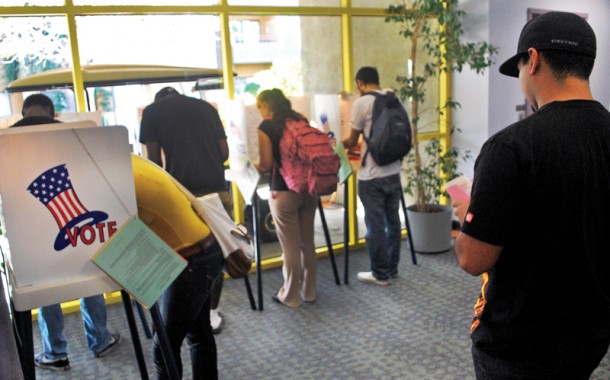 With this year’s presidential election nearing, one of the frequently asked questions is, “Who are you voting for?” It seems that candidates Hillary Clinton and Donald Trump are inevitable.

However, there are many questions and uncertainties on how to go about voting. It’s not just a matter of who you want to vote for, but also how. How can you participate in this presidential election?

First, you want to ask yourself, “Am I registered to vote?” If the answer is yes, you’re one step ahead. If the answer is no, the steps are easily accessible online on http://registertovote.ca.gov/. Make sure you have your California identification card or driver’s license and social security card, as the voter registration application will require this information.

Once completed, a voter registration confirmation card that you need as proof to be eligible to vote will arrive via mail within 30 days.

The voting process can be done in two different ways, in person, and by mail.

If you choose to vote through the mail, make sure to download, print and fill out the California ballot application found on http://www.sos.ca.gov. It must be mailed and received by your county elections office no later than Nov 1. Once the ballot material has arrived, fill out all personal information, vote, and send to the returning address.

Voting in person may be an easier option. You may find your local polling place on the back of your sample ballot mailed to you, or by looking it up online. Polling places are open from 7 a.m. to 8 p.m. Time in the voting booth is limited, but any further assistance, such as how to use the voting machine, reading the ballot, or even marking your votes on the ballot can be answered by a poll worker.

Presidential election information and how to vote instructions are provided on campus in a fun, yet informative way.

The Associated Students have created events, such as the Big Politics fair held last Thursday, Jokes For Votes comedy show on Friday, Oct. 14, and the documentary, “Bring It To the Table,” will be shown on Oct. 18 at the theater in the University Student Union.

“Our job is to try and get students involved, get them informed about the national elections, and get them registered,” Kevin Mojaradi, the marketing coordinator of AS, said. “That’s our purpose.”

He stated that they try to have these events every year for students and it has been a huge success.

“Every year is a different form,” Mojaradi said. “Because this is such a huge election, we made it grander and bigger to draw more people.”

Even students have their own opinions as to why voting for this presidential election is so crucial and important or even not worth their time.

Biology major, Azita Panahpour, stated that voting is a privilege and that everyone should take advantage. She believed students don’t vote because they’re either not informed or don’t know how the system works.

“I don’t think they realize they’re the ones who will be affected by it,” Panahpour said. “I want to have a say in the voting system because it can either destroy us or make America better.”

Kinesiology major, Kristel Bushner, admitted she was not into politics. Like many others, however, she still feels every vote counts and can make a difference.

“If they don’t like the candidates, then they won’t feel the need to vote,” Bushner said. “But not voting still gives the other person an advantage.”

Despite the fluctuating possibilities on who will or will not vote, Mojaradi explained that this generation of students are very smart and highly informed. It was all a matter of giving them that extra push.

“They know the issues, they study it up, and don’t take words at face value,” he said. “I don’t think it’s a lack of information, but a lack of motivation to go out there and actually do it.”

Don’t forget to have a say in this year’s presidential election and vote on Election Day, Tuesday, Nov 8.