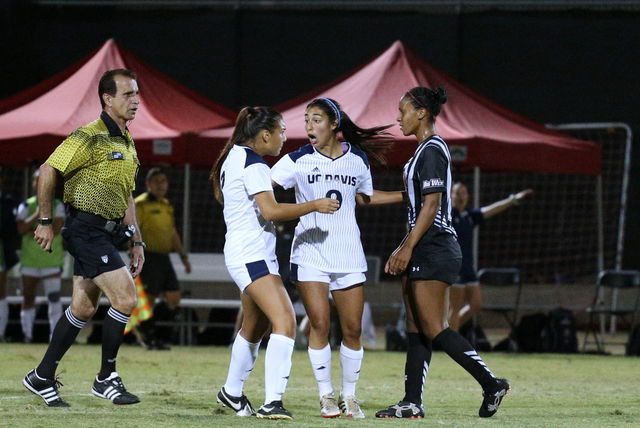 Amidst a physical game, Andi Damian (9) broke up a fight late in the second half, September 30, 2016 against UC Davis. There were no cards given in the game. Photo Credit: Max Zeronian/ The Sundial

The CSUN women’s soccer team added another win under their belt as they defeated UC Irvine, 1-0, on Sunday at the Anteater Stadium.

With the win, the Matadors earned four-straight conference shutout victories for the first time in the program’s history.

CSUN saved no time to drive in a goal as Kourtney Kutscher went in for a shot 25-yards outside the right of the box, but the ball headed wide-left.

The Matadors went in for another attempt as forward Cynthia Sanchez scored the first goal within the first three minutes of the first half with an assist from teammate Camille Watson.

The Anteaters had a total of 10 shots to CSUN’s eight, but execution made the winning decision. The Matadors ended with five saves to UCI’s four.

Before the end of the first half, CSUN’s Kristen Von Meter went in for a header shot, but Anteater Maddie Newsom came out with a successful save for UCI.

At the start of the second half, UCI came in with a quick rebuttal as Jessica Miclat went in for a shot, but Matador Jovani McCaskill came out with a successful save for CSUN.

CSUN ended with two corner kicks to UCI’s six, but neither team managed to score for the remaining 45 minutes of the game.

The Matadors’ next match will be at home on Oct. 23 against the University of Oklahoma. The game is scheduled for 1 p.m.