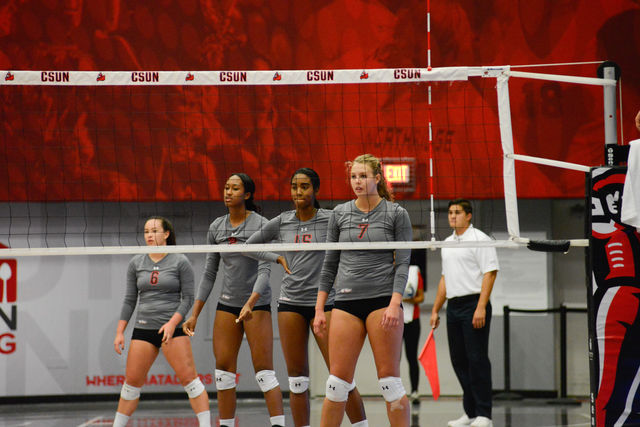 Erin Indermill, left, Aeryn Owens, Melissa Eaglin, Lauren Conati, right, starring at their opponent(UCSB) while they re position themselves at around 8:00pm 9/30/16 at Matadome. Photo credit: Alejandro Aranda

The CSUN women’s volleyball came in with a record of 6-12 to play Cal Poly Friday at 7 p.m.

CSUN took advantage early due to errors committed by the Mustangs.

Aeryn Owens gave the Matadors an 8-4 lead after a kill. The Mustangs did not back down and only trailed by one point, bringing the score 9-8.

In the third set, Cal Poly took an early lead, setting the tone for the rest of the set. Attack errors by Haake and Diaz gave the Mustangs a 6-10 lead. Cal Poly won the third set 25-27.

In the fourth set, CSUN trailed by six mid way through. CSUN fought back, but it was not enough as Cal Poly took the fourth and final set 15-25.

The Matadors continues on the road, playing UC Santa Barbara tonight at 7 p.m.