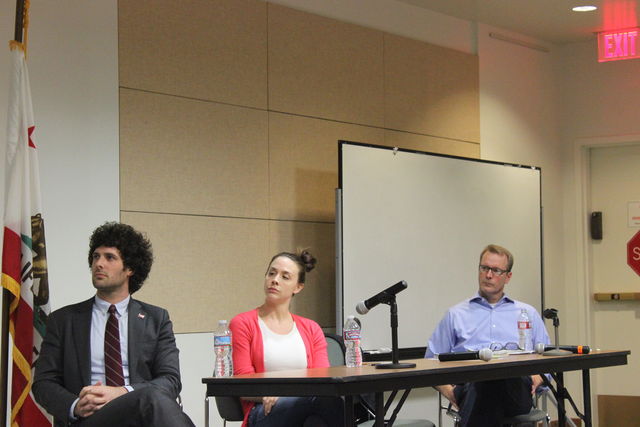 The event began with a welcome from librarian Laura Wimberley, who let the audience know that Prop 60 had been chosen as the discussion topic because, according to a USC Dornsife and Los Angeles Times poll last month, the proposition had the highest number of undecided voters at 13%.

Professor Hogan-Esch was the first on the panel to speak and gave a brief history of direct democracy and how things such as propositions work.

Next was Professor Tarrant, who discussed her book, “The Pornography Industry,” and questions to use as a framing device for assessing views on Prop 60.

“I want you to consider pornography as an actual media genre and as a workplace,” Tarrant said. “In other words, pornography doesn’t create these issues. These issues already exist. Like labor safety, violence against women, sexual harassment, and pornography didn’t make those.”

Tarrant went on to ask a series of questions, such as how much should the government be involved in telling us what we do with our bodies and what the government’s responsibility is in promoting public health.

Next to speak Cohen from the AIDS Healthcare Foundation. Cohen explained why he and his organization feel that Prop 60 should be approved.

Using a slideshow filled with statistics, Cohen discussed Cal/OSHA and their desire to protect workers in the adult film industry by requiring them to wear condoms and equated it to construction workers being required to wear hard hats.

Last to step up to the podium was Chanel Preston, an adult performer, and chair of the Adult Performer Advocacy Committee.

Preston spoke about her belief that Prop 60 is designed to hurt performers rather than protect them. She explained that the proposition allows citizens to sue pornography producers who they don’t believe are using condoms.

This is designed to target employers to keep employees safe, but Preston said when nearly every person has a camera phone or webcam, more and more adult performers are being considered as producers.

Preston continued to say that APAC is working toward making sure performers have the right to choose whether they’d like to use condoms or not while working.

The event concluded with a question and answer session that allowed the audience to ask panel members to speak on specific points.