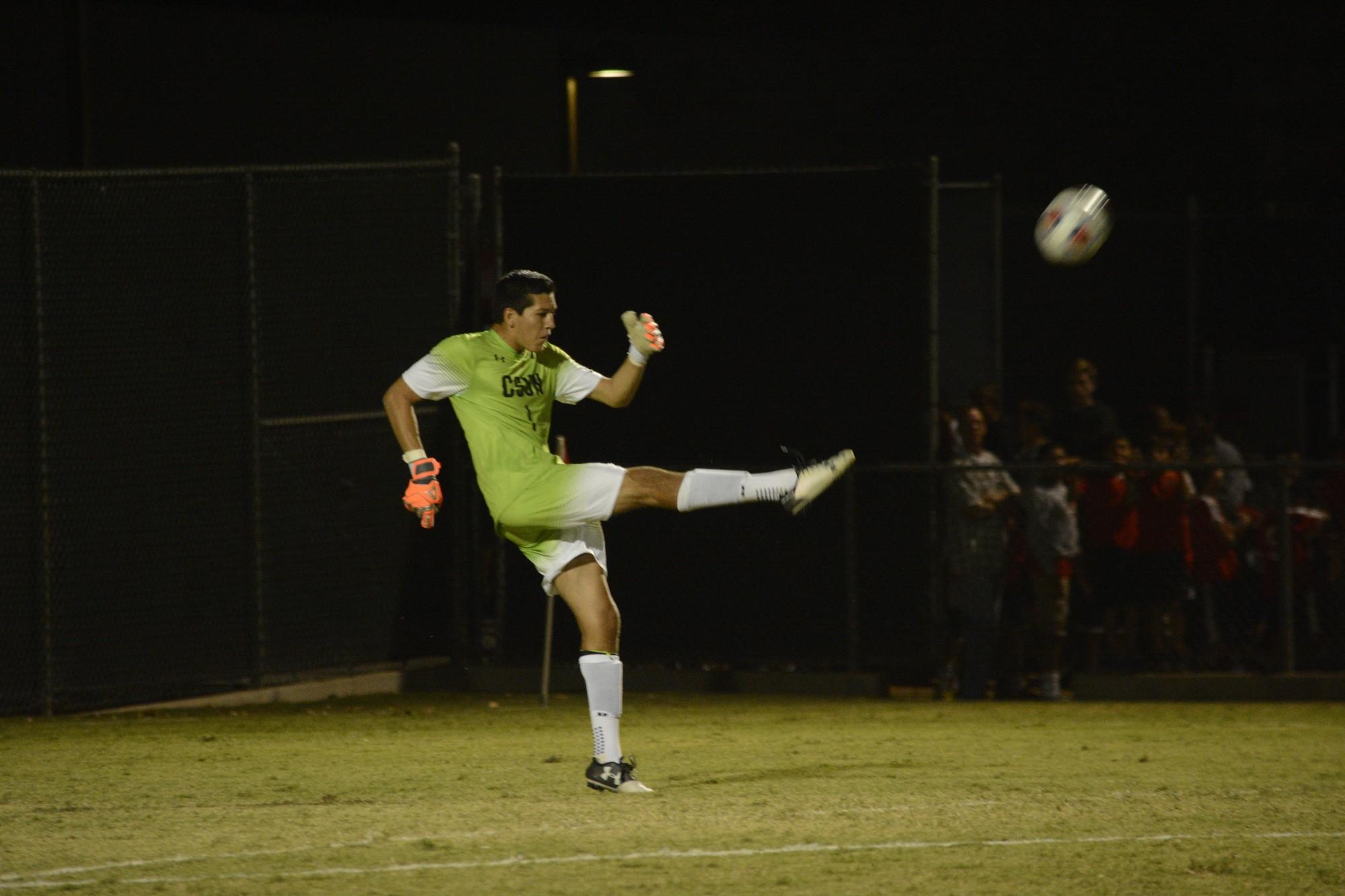 Goalkeeper Kevin Marquez kicks the ball down the field to his teammates in hopes to bring it to the Tulsa goal. (File Photo/ Kendall Faulkner) Photo credit: Kendall Faulkner

The CSUN men’s soccer team defeated UC Irvine 3-1 at home and secured their place in the playoffs.

The Matadors recently saw the UC Irvine Anteaters come from behind and defeat them 4-3 at Irvine. The Matadors played to punch their ticket to the Big West tournament and the possibility of home field advantage.

The Matadors came out looking to create scoring chances and their defensive line was a wall that made the game difficult for the Anteaters.

Even with such an impressive performance, coach Terry Davilla still saw areas for improvement. Davilla said his back line was spread out late in the game.

“Our back line needs to push up a little bit more, so they can help out the forwards and midfielders,” Davilla said.

Davilla received plenty of praise for his senior players, who have become the leaders on his squad the last two games.

“I like it, and you can’t ask for anything more,” Davila said.

Midfielder Juan Fernando Samayoa saw his free kick in the 16th minute find defender Patrick Hickman in the middle of the box. Hickman went up over the Anteater defenders and keeper and scored the first goal.

“Every team is so tight and every game is so close you never know when you will need that one set piece goal,” Hickman said.

In the 75th minute, Samayoa sent a pass to midfielder Shane Steffes, who beat the keeper in a one-on-one. Steffes sent the ball into the left corner of the goal to put the Matadors up by two.

The goal by Steffes was his first as a senior and one he was glad to make.

“It was a team effort and I’m glad I was able to help my team win,” Steffes said.

The Matadors saw the Anteaters score a consolation goal in the 83rd minute when keeper Kevin Marquez was unable to stop a shot into his left post.

The Matadors put the game out of reach when Samayoa scored on a free kick in the 88th minute. Samayoa sent a low shot into the right corner that got past the Irvine keeper.

Samayoa said the win was huge for the team as it placed them in first place and in the playoffs.

“This is the most important win of the year,” Samayoa said.

This sentiment was echoed by Hickman and Steffes who said this win was huge for the team.

Up next for the Matadors, they will visit Big West South rivals Cal State Fullerton on Oct. 26 at 7 p.m. as they look to stay on top of the division.