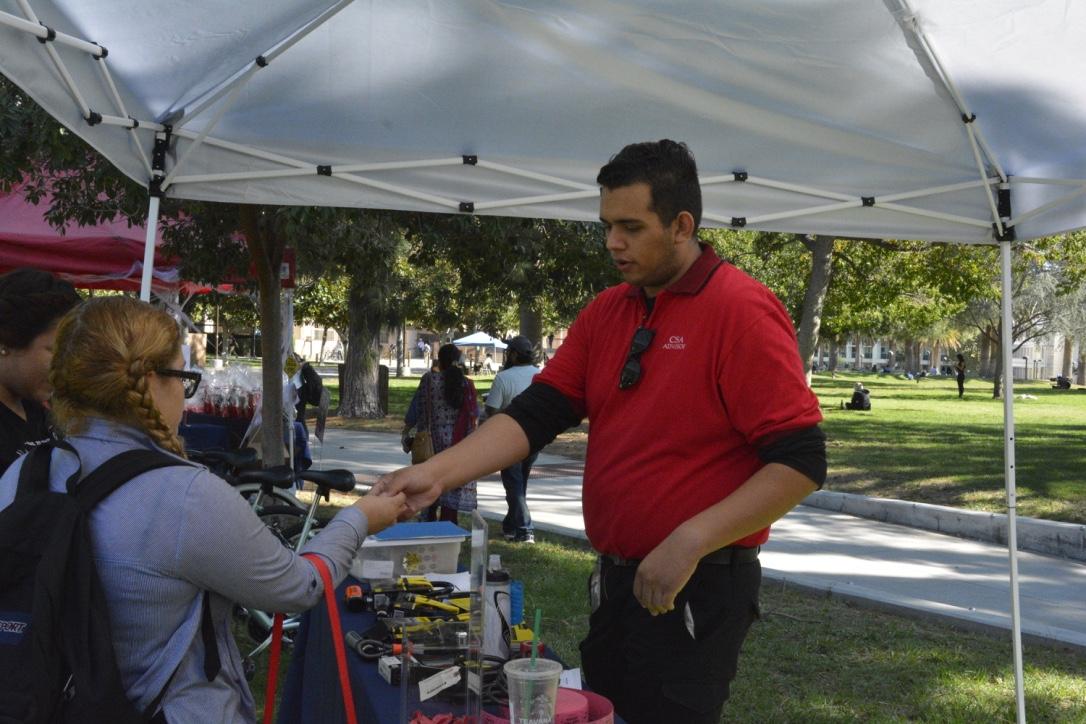 The event promotes disaster preparedness and gave students an opportunity to gather a variety of free emergency supplies from different checkpoints across campus.

“It’s fun and it’s Halloween, so this is really great way to get people’s attention, especially with the ‘Walking Dead’ premiering just on Sunday evening,” said emergency preparedness manager Jenny Novak. “This is really a great way to get people interested in the subject that they otherwise really probably wouldn’t pay any attention to which is preparing for disasters.”

Students began the scavenger hunt at the starting booths lining Bayramian Lawn where they received an empty red lunch bag, a campus map marked with the nine checkpoints to visit and a punch card.

“The students are having an opportunity to gather disaster supplies, which are for the zombie apocalypse, but could also work for earthquakes, fires, and floods,” Novak said. “Any disaster that occurs, they’ve already got their kit started, which is a big thing that we promote in the emergency preparedness world is: get a kit, make a plan, be informed.”

Some of the items students were able to get for their emergency kits ranged from pocket flashlights to water bottles to an 8-piece pocket tool. The supplies on the hunt were small enough to fit in their red bags, and can be used in an emergency.

Event volunteer and junior deaf studies major Jacquelyn Espinosa said a lot of people do not realize disasters can happen at any time and that the event helps spread awareness for emergency preparedness.

Students participated in the zombie scavenger hunt for different reasons.

Freshman Martin Gonzalez-Barrios said he joined the scavenger hunt for the free stuff and prizes.

After visiting the booths at each checkpoint, students returned to the starting booth to enter the marked-up punch card into a raffle for several grand prizes.

“We just hope that’ll broaden people’s horizons,” said Novak. “They’re going to think a little bit more about emergency preparedness, than they would have if they hadn’t participated in an event like this.”