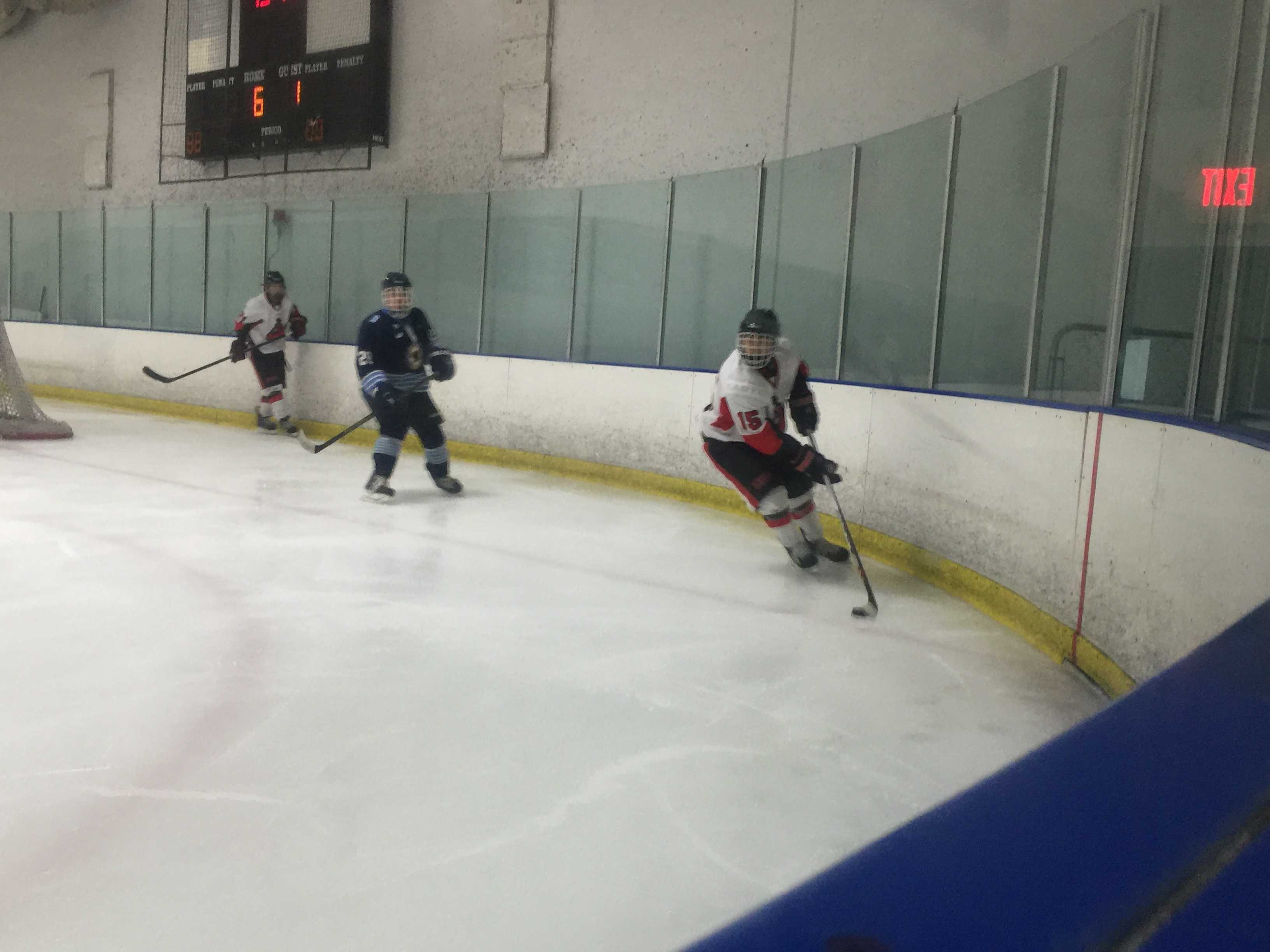 (15) Quentin Abaya circles the zone with (21) Tyler Holstein of UCLA and (21) Issac Breault wait to see what Abaya will do with the puck Saturday night at the Iceoplex in Simi Valley. Photo credit: Solomon Ladvienka

Earlier in the season the Matadors embraced the name “comeback kids,” but lately, CSUN has been scoring earlier in the periods.

“We are starting to get dialed in by figuring out how to start games and how to finish games,” Head Coach JP Gale said. “It feels really good to be doing that as we step up the competition in two weeks when we go to Arizona. We are going to need that to have a chance in those games.”

CSUN came out strong this past weekend in both games against UCLA, starting off with a 2-0 lead in the first game and a 4-0 lead in the second game.

“We’re trying to go for name ‘The Team to Beat,’” said captain Alex Reints. “We are wanting to make it all the way to Nationals and having other teams be excited to play us instead of the other way around.”

Reints and the rest of the Matadors defeated the Bruins on Friday night with a final of 6-2. The Matadors would return home to face off against UCLA the next night, also defeating the Bruins, 8-2.

In their first square off, Cameron Rorick and Reints got CSUN on the board early. With assistance from Tereck Morales, Andrew LaGaly, and two goals from Eli Berengut, CSUN won the tenth game of the season.

“It feels good getting points for the team is a real nice feeling,” said Berengut who had three goals and three assists this weekend. “It’s not just me, but going out there with my line and everyone that I’m out there with, we’re trying to get points all around.”

CSUN returned home Saturday night and the route was on from the gate. CSUN has not witnessed a “Natural’ Hat Trick” in some time, and the fans in attendance witnessed two following Saturday’s win.

Reints opened the scoring affair with three goals all in the first period.

“Just sticking to the physical play and playing my style of hockey of how I was taught, played into factor tonight,” Hefty said. “One of our biggest aspects of our play is our physicality. We always want to break down teams, get bodies on bodies and put the puck in.”

CSUN will be at home this Friday night at the Iceoplex in Simi Valley where they face off against the Tritons of UC San Diego at 8:15 p.m.