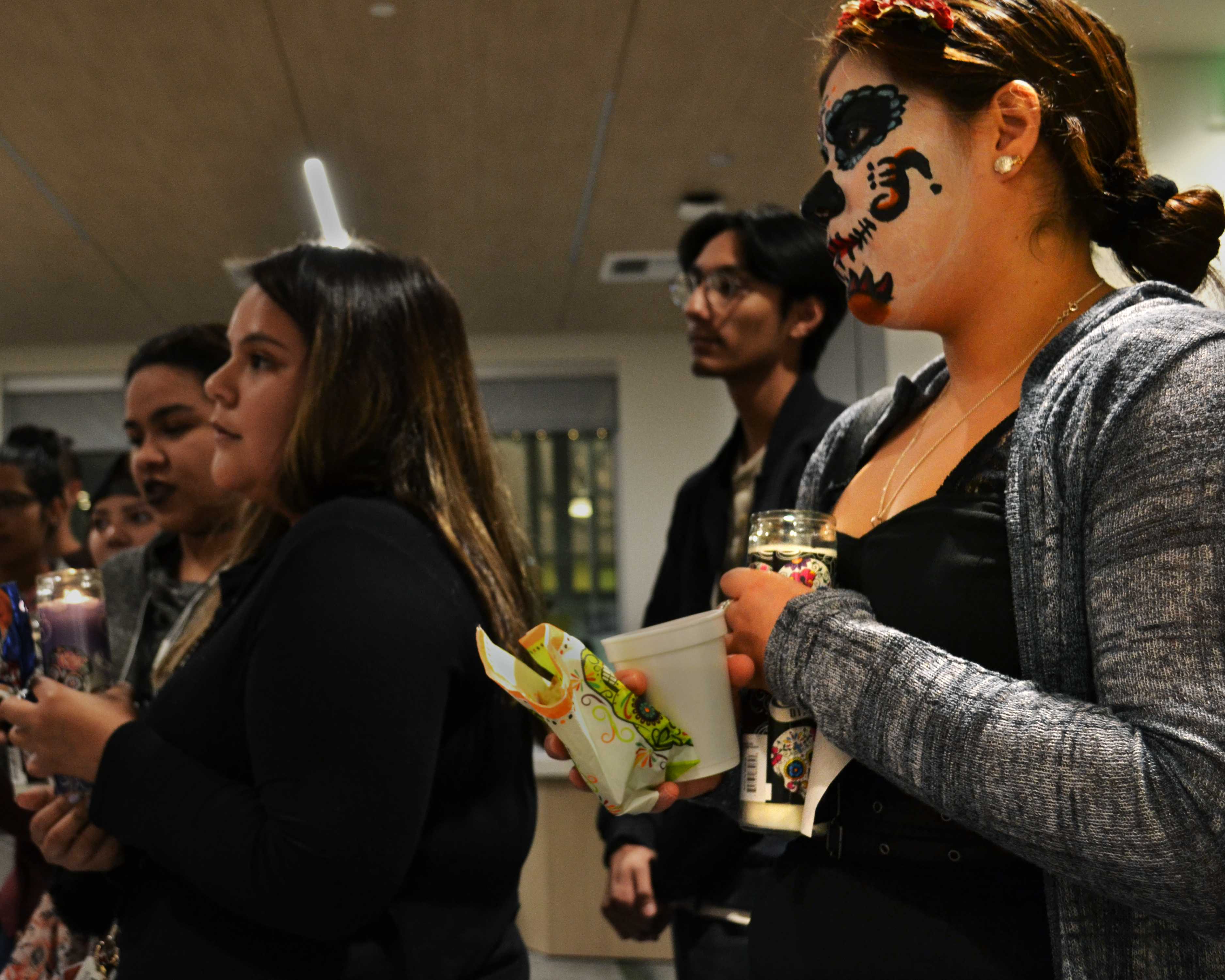 Melissa Arambula (right) looks on as CSUN students pay tribute to the dead in Honor of Dia de Los Muertos at an altar set up by the student group, Latinas Rising, on Wednesday, November in building 21. (Eric Licas / The Sundial)

After a close friend and schoolmate, Ricardo, died unexpectedly from a heart attack during a middle school P.E. class, Yessica Santana’s mother decided to keep her from attending the funeral because she believed the experience would be too much to handle for the fifth grader.

Barred from a chance to grieve, Santana has now kept her friend’s memory alive.

Each year the sophomore art major places a small photograph of Ricardo onto a brightly decorated altar that is often times decorated with food, flowers, candles and candy in celebration of Dia de los Muertos (The Day of the Dead).

This year, she and the student organization Latinas Rising shared the Latin American holiday with CSUN students at the campus housing’s Multipurpose Room in building 21 on Wednesday.

“In my family, a lot of death has happened,” Santana said, who sits on Latinas Rising’s student leadership board. “When I think about it I get very scared, but because of this day I’m learning how to cope with it and live life.”

The holiday is seen as an opportunity to honor and celebrate rather than mourn the dead, according Vanessa Galvan, another member of Latinas Rising’s student leadership and a Chicano and Deaf Studies major. She said celebrating the lives of loved ones who have died allows them to live in the hearts of those they left behind.

“We remember their lives, not their deaths,” Galvan said. “We are accepting the fact that they are dead, but now we are going to remember them by, technically, partying.”

Different countries put their own spin on Dia de los Muertos celebrations, but families typically put together altars in memory of the the deceased in an attempt to lure the souls of lost relatives back to earth from the afterlife.

The elaborate displays are adorned with candles and the favorite foods of those remembered in order to guide them to their families. Flowers meant to mask the smell of decay, candy skulls, and a host of colorful symbols associated with the holiday make it a captivating multi-sensory event for those who participate in its celebration.

Although the holiday isn’t normally celebrated outside of certain Latin American countries, the iconography of Dia de los Muertos has begun to garner mainstream attention.

Day of the Dead style face paint was a popular feature of many costumes this past Halloween, and candy skulls for trick-or-treaters were also available for purchase. While some have raised concerns regarding possible cultural appropriation, the holiday’s growing popularity doesn’t have to be a bad thing, according to another one of Latina Rising’s Student Leaders, Elizabeth Perez-Monarrez, senior communications major.

“If it becomes more mainstream, that’s fine as long as you know the significance behind the symbols,” Perez-Monarrez.

Keeping CSUN students in touch with their rich and varied heritages has been a priority of Latinas Rising. Latinas/Latinos who feel disconnected from their families and out of place living in student housing are especially at risk of struggling academically, according to one of the student organization’s advisors, Nancy Alonzo. Social events like their Dia de los Muertos celebration help foster a sense of community and build support amongst each other.

“I’ve met many students who thought they wouldn’t be able to finish their educations,” Alonzo said. “Oftentimes, they come back and tell me that if it weren’t for this group, they wouldn’t still be here.”

She said many of them face financial hurdles on their way to graduation. Latinas Rising also hosts informative seminars and workshops geared towards building tools for academic success.

The group is inclusive, and open to anyone with an interest in learning about navigating the college experience, particularly as a Latina. The group meets every two weeks on Mondays in building 21’s Multipurpose Room.