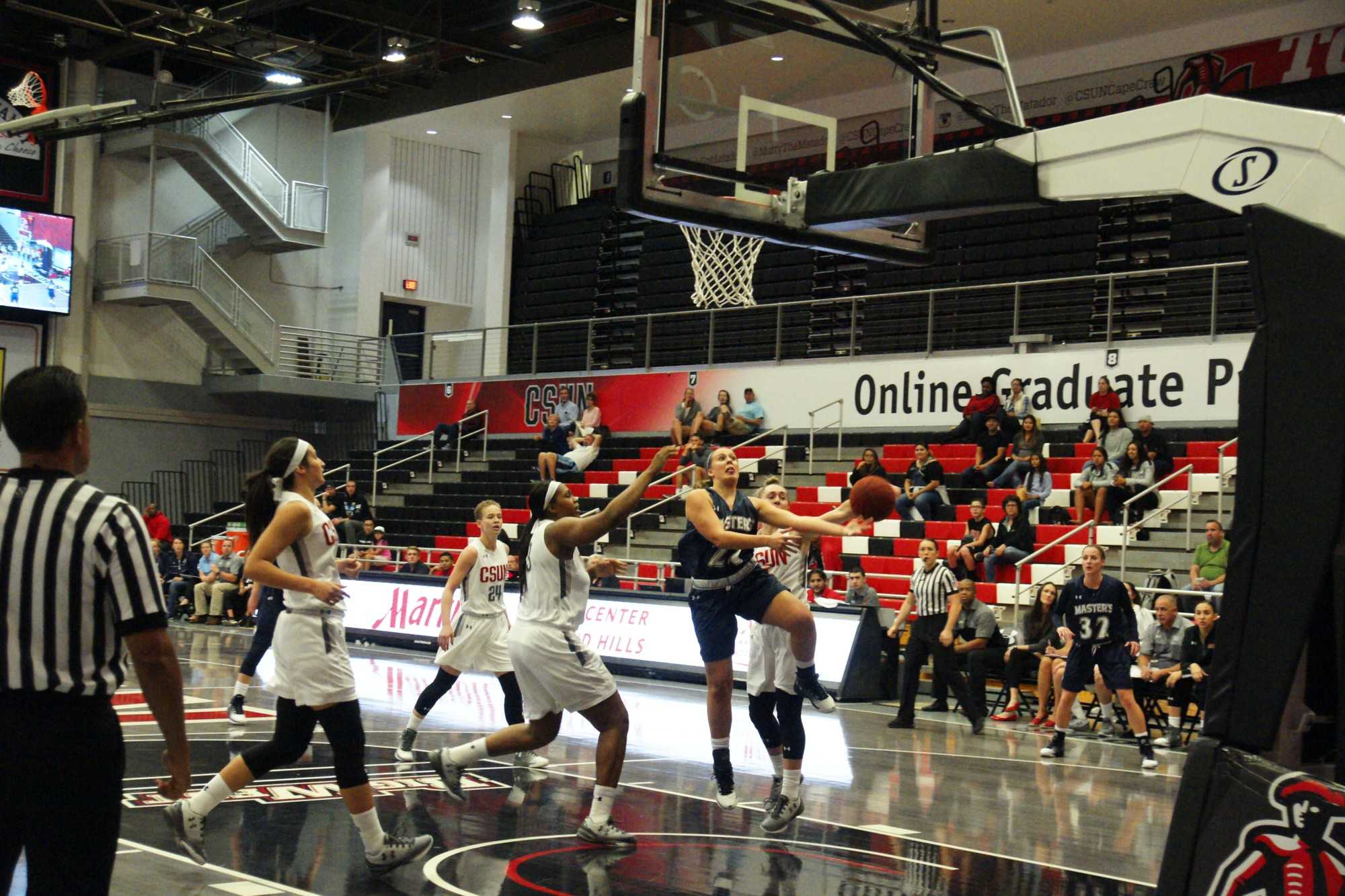 The CSUN women’s basketball team beat The Masters College Lady Mustangs 74-53 on Friday night in an exhibition game to unofficially open up the 2016-2017 season.

With the Matadors getting the opening tip, it was clear what their offensive strategy was to get the ball inside.

The Matadors looked aggressive from the opening tip on both sides of the ball. Junior guard Serafina Maulupe had a well rounded game, recording 13 points, four rebounds, and five assists while playing a game-high 28 minutes.

“It’s always important to set the tone for the younger players on the team,” Maulupe said. “This year we all felt comfortable out there. We are a close group and we are all willing to put our bodies on the line to get a W.”

Holding the Lady Mustangs to a dismal 26 percent shooting from the field and forcing 24 turnovers, defense was key for the Matadors win.

As senior guard Emily Cole put it, “We definitely need to be tougher on the defensive end. Basketball gets physical at times, but we also feed off each other when someone dives for the ball or rips the ball from somebody. When you see your teammate sacrificing their body, you want to do the same for them.”

With contributions from sophomore guards Cheyenne Allen and Nautica Morrow, chipping in a combined 10 points, four rebounds, three assists, and five steals, it was a collective effort from the whole Matador squad.

With a talented but young roster consisting of nine freshmen and sophomores, it is clear that the Matadors will have to put in the same effort and intensity every time they step out on the court.

“Our expectations never change. We need to find out how good we can be at the end of the year,” said head coach Jason Flowers. “In order to do that, we need to treat every single day like its a championship game whether it be in the weight room or in practice. That will never change. Even if we have 15 seniors or 15 freshmen, the goal is the same.”

With a tough upcoming non-conference schedule against teams like Stanford, Washington, and Michigan State, the Matadors will definitely be tested and pushed to see what they are made of early on in the season.

“I think you have to challenge yourself in anything in life to find out what you need to be better at,” Flowers said. “It’s one thing to play well against certain teams that might fit your style, but it’s a completely different thing to find out what your deficiencies are and correcting them. That’s what our program is about. It’s about getting better. It’s about improving and in order for us to know where we are at as a team, we need to be challenged.”

The Matadors officially open the year on Friday, Nov. 11 at 4 p.m. against Portland State at The Matadome. The game is part of a CSUN basketball doubleheader as the men’s team will face Pomona-Pitzer scheduled at 7 p.m. following the CSUN-Portland State contest.