The Latinx community has the power to swing an election 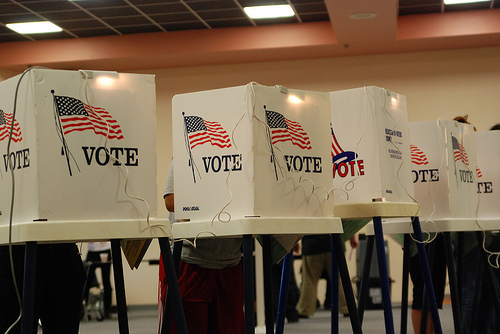 During the period between the 2000-2012 presidential elections, around 10 million Latinos were eligible to vote, however, about less than half that number voted.

This indicates that Latinos have the power to swing an election, but as a group, they don’t participate in the democratic process.

Daniel Saravia, a 20-year-old Central American studies major who identifies as “a democrat/borderline socialist” and who will be voting in his first election this year, has not allowed the lack of Latino political visibility dampen his resolve to become involved.

“That doesn’t really play into my decision making, but I guess on a subconscious level, I think about it, like who best accurately represents me and that’s ultimately who I’m voting for,” Saravia said. “But it would be nice, of course, at some point down the line to see a prominent Latino Democrat or maybe further left even.”

Central American studies professor Linda Alvarez acknowledged that candidates make the mistake of assigning immigration as too big of a role as the singular issue which concerns Latinos. While it is still a major concern for many, it still is not the only issue.

Alvarez, who is currently working on a project about the Black Lives Matter movement and how it resonates with Latinos, said that there’s a tendency to focus on immigration into the country and not enough on the reasons for it and why people are leaving their countries in the first place.

“Foreign policy is something that is very important. It is one of the root causes of immigration and so for Latinos, this is very important because we are linked to our home countries and the kinds of things that happen in our home countries,” Alvarez said. “These are trans-national communities, but that’s something that’s generally ignored in these type of domestic elections.”

CSUN political science professor Jason Morin, said something that can occur is that people tend to look at Latinos as one homogeneous group, not realizing there large numbers of smaller groups that exist with their own set of ideals.

Morin, who is of Mexican ancestry and has conducted research focusing on Latino voters, cites an example of this within the Cuban-American community.

“Cubans have identified as Republican based upon their own immigration experiences and ties to Cuba and to the old Castro regime and so Republicans were able to court Cubans in that way,” Morin said.

Morin also said there are also differences in political views throughout various generations. According to Morin, Cubans from the millennial generation don’t have the same connections as previous generations because they understand politics through a U.S. context.

Donald Trump, who is the republican presidential candidate, has made several comments about the Latino community during his campaign, leading some to believe this will serve as a catalyst for Latino voters to come out to the polls in record numbers. Alvarez said,however, this may not necessarily be the case.

“To a certain extent, there’s still an element of fear in the Latino community because of being undocumented,” Alvarez said. “So, if a large population is undocumented, then there’s some insecurity in terms of voicing political feelings and opinions.”

However, there are groups who are working to get Latinos to vote. Groups such as Mi Familia Vota, the Latino Voters League, and Vota Latino are all non-partisan organizations which seek to empower Latino men and women by increasing their participation in the democratic process.