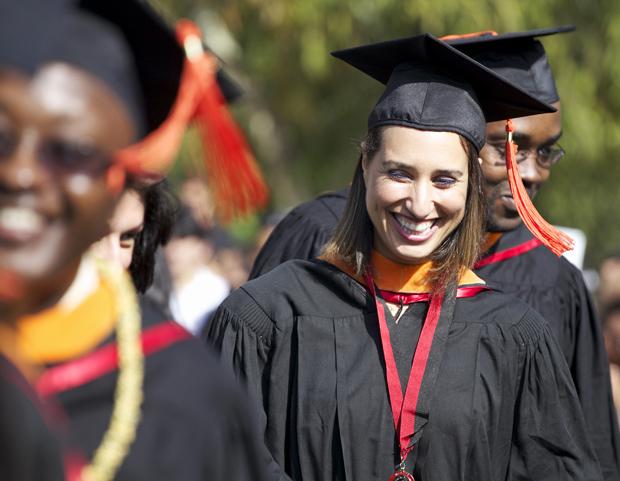 Many college students still struggle with finding a job even with a degree.

Marisa Rodriguez is one student who has graduated and can’t find a job in her field.

“Life has been stressful,” Rodriguez said. “Trying to find a job in public relations has not been easy and it makes me think if I’ll ever have a real career in P.R.”

Being a full-time student and a full-time employee also didn’t give her any free time to find internships.

“Since I had to work full-time while I was in school, I couldn’t even devote a few hours to interning like everyone was able to, which made things much harder for me because many jobs want to see at least two to three internships under your belt to even consider you,” Rodriguez said.

Rodriguez also said the struggle to start her career in public relations has discouraged her because she feels as though those who have found success have either had internships or know people within companies.

However, Ana Murguia, a 23-year-old alumna loves life after leaving CSUN and graduating with a child and adolescent development degree. She said her life has completely changed for the better.

“I recently started my career as a preschool teacher and I enjoy every minute of it,” Murguia said. “I never imagined myself in a classroom with a group of kids, but I’m extremely happy where I am in life.”

Before graduating, Murguia would get discouraged because people were constantly telling her she wouldn’t find a job with her major, but what kept her going was a positive attitude.

“I know many people who have graduated two, three years ago and still can’t find a job in their field. I believe that the economy plays a major factor, but it’s also up to ourselves to network,” Murguia said. “Every opportunity I’ve earned is through networking; I am not afraid to go up to a professional and introduce myself and tell them what I have to offer.”

Kris Hasan, a 23-year-old communication studies major, graduated in 2016 and although he said he is not working in his field yet, his life has been more productive since he graduated.

“I am doing internships for the sports paper and I also help a women’s basketball team,” Hasan said “…I got these internships’ by simply emailing them and telling them what I have to offer.”

Hasan also said he can only afford to pay for his gas and food because he is more concerned about focusing on his school and internships.

“I really haven’t looked for jobs with my degree because I am waiting to get my masters, but I am afraid to not find one,” Hasan said.

*Donna Lugo contributed to the reporting of this article.