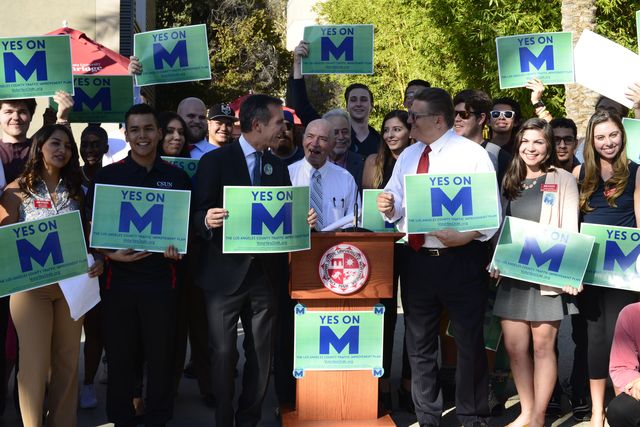 With the upcoming election, it is important for students to be informed on the propositions they are voting for, according to Associated Students (A.S.) Attorney General Christian Rubalcava.

CSUN has had events on campus where students are welcomed to get information on certain propositions that are important for students, according to Rubalcava.

“As associated students, in general, we really need to get input from the student body and recognize what issues matter to them and directly affect them,” Rubalcava said.

According to Rubalcava, CSUN hosts events that feature propositions in order to educate students about the ones that are going to impact them later in time.

Associated Students President, Sevag Alexanian, said students need to know the presidential candidates are not the only things that are going to be on the ballot.

“One thing that a lot of students forget is that we have a lot of other measures that are going to be on the ballot,” Alexanian said.

Both Alexanian and Rubalcava said events relating to politics occur every election, but this particular election has gotten the most attention.

“This year has been a larger scale because of the presidential candidates,” Alexanian said. “They add to more people being involved in this particular election.”

Rubalcava and Alexanian said these events on campus are meant to educate students and show them both sides of an idea.

“Information is everything and if we’re informed then we can make decisions based on what we believe in and we have the research behind it,” Rubalvaca said. “It’s going to matter a lot more and we’re going to feel a lot more part of the process than if we just voted on something without any information behind it.”

According to Noushig Manoukian, a political science major, students need to know the importance of what they will be voting on.

“I think a lot of students might not always have the time to read through the proposition book, so when they’re at school it’s a good idea to have things that teach students about that stuff,” Manoukian said.

Manoukian said she thinks CSUN should promote the propositions and elections that appeal to students, but they should also try to incorporate the other propositions and measures in an unbiased way.

Rosy Rodriguez, a journalism major, said she also thinks CSUN should give an overview of all the propositions and measures that will be on the ballot in order to help students make better decisions and because it is important to know what they will be voting on.

“I think it’s important that student have that opportunity to find more information about propositions and measures because they don’t always time to get information because of all their studying or because they either work or go to school,” Rodriguez said. “Also because T.V. commercials only give you about 15 to 30 seconds of information about certain propositions, so you can’t really make a well-educated decision based on a 15 to 30 second advertisement on T.V.”

According to both Rubalcava and Alexanian, the school does not get paid to endorse proposition and measures on campus, but they hope students take a lot from these events.

“Knowledge is power at the end of the day, the more you know the more power you have to make these kinds of decisions,” Alexanian said.