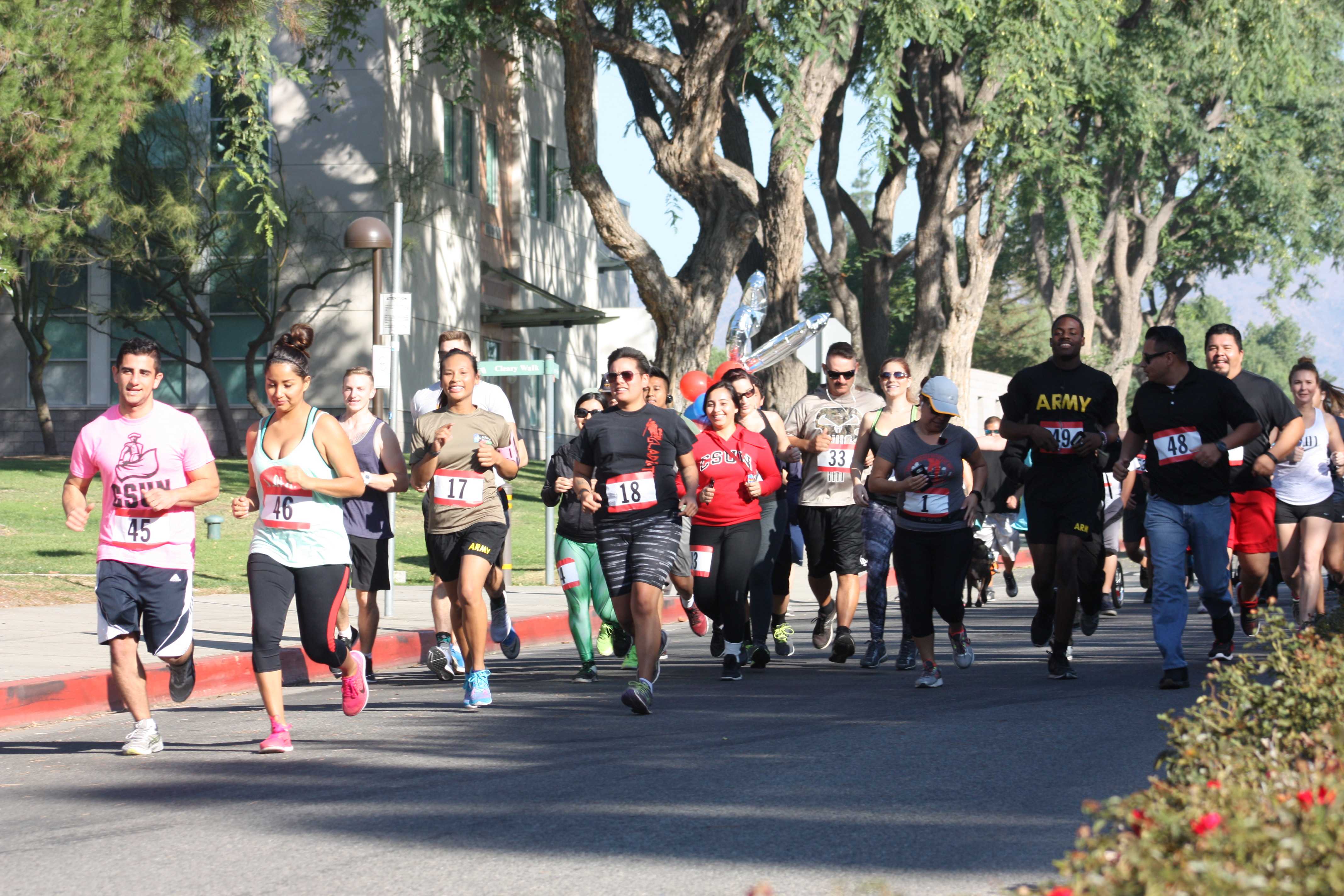 Veterans and campus allies laced up their running shoes Sunday morning in support of CSUN’s student veterans at Sigma Tau Alpha’s first 5k Fun Run and raised over $1,200 for a veterans mental health cause in the process.

Runners were given a U.S. flag at the end of the three-mile course, which was then placed in the Flag Garden that will be on display all week in front of the Oviatt lawn in honor of Veterans Day on Nov. 11.

Patrina Croisdale, Veterans Resource Center (VRC) coordinator, said each flag represents one student who has served in the military on CSUN’s campus – a total of 695 out of over 41,000 students.

Croisdale said the issue of visibility is part of the VRC’s mission. Student veterans account for less than 2 percent of the student body.

“I hope that they see it in a positive way. We want to celebrate them and their service. [The display] lets them know that there are 694 people like them on campus. We want them to feel like there’s other people they can relate to,” Croisdale said.

Volunteers and supporters of the VRC have set up the flag display for the past three years but added the Fun Run for the first time this year. CSUN’s fraternity for veterans, Sigma Tau Alpha, and the VRC secured the funding, while volunteers from Kappa Sigma manned the course. Members of the fraternity also took part in the run and flag planting.

All proceeds from the $15 registration fee were donated to Soldiers Project, a nonprofit which provides free, confidential psychological counseling to post 9/11 veterans and their families. The charity, which connects veterans to a volunteer network of mental health care providers, is an alternative to the V.A. healthcare system.

Croisdale has a close family member who is a Korean war veteran, but her day-to-day interactions with the military community at CSUN has made her appreciate their service on a deeper level.

“Seeing how much they care, how much resilience they have – I feel honored to be allowed to serve them,” Croisdale said.

Attendees of the morning events included military-connected community and family members, as well as students like Neftali Mendoza-Mejia, who considers himself an ally of CSUN’s veteran community.

“I have friends who are connected with the VRC and they’ve always made me feel welcome there,” Mejia said.

Mendoza-Mejia was among the large group of volunteers who stayed after the Fun Run to complete the flag display.

Laurenz “Bubba” Howell, volunteer and special programs lead at the VRC, has coordinated the Flag Garden display for the last four years.

He served 14 and a half years in the Navy and is now majoring in mechanical engineering at CSUN.

Howell arrived early Sunday morning to lay out a grid and planted the first few hundred flags in the display before being joined by volunteers as they finished the run.