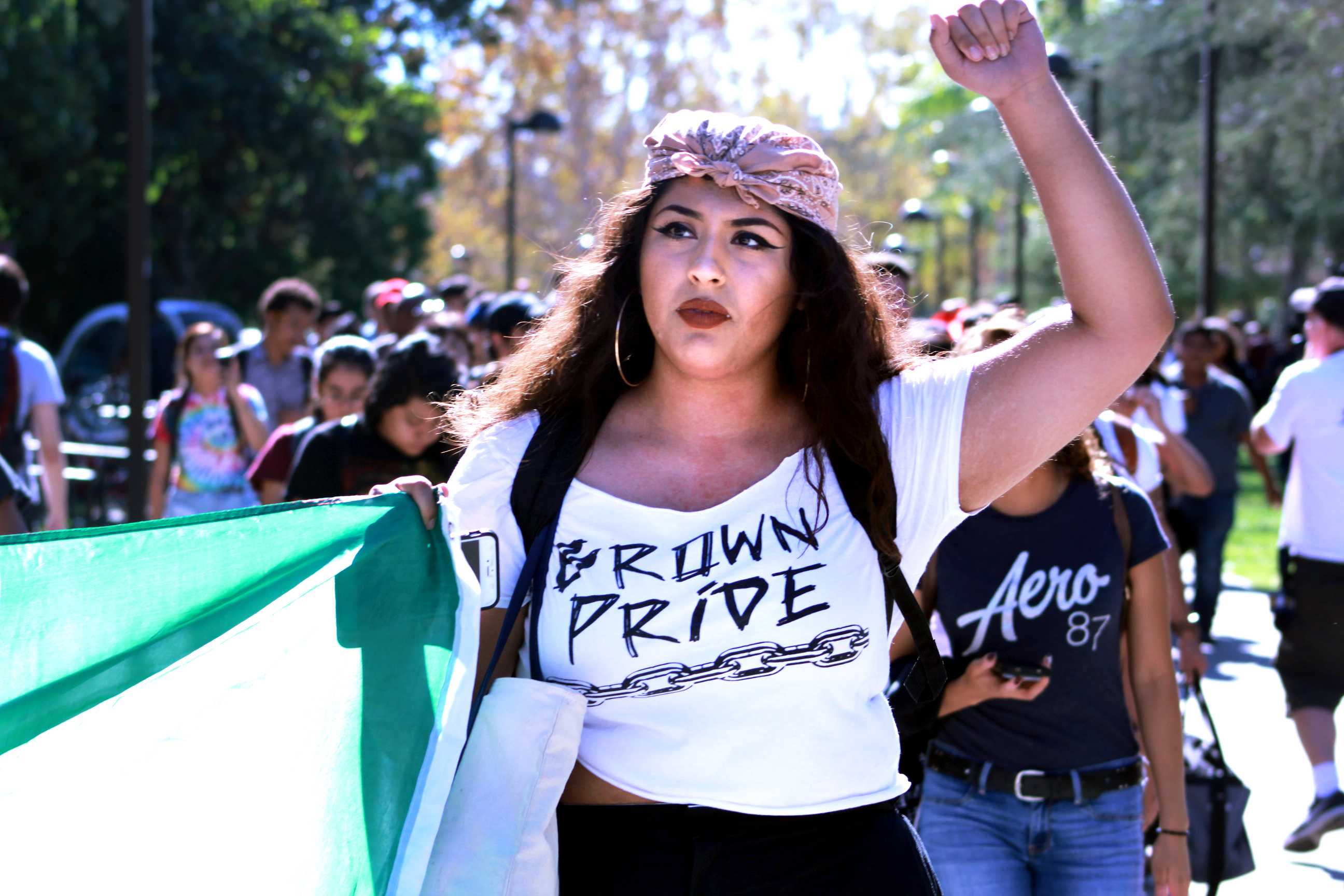 Over 100 Students marched through the Oviatt lawn Wednesday afternoon to protest  the election of Donald Trump as the 45th president of the United States.

The protest began with approximately 20 students gathered atop the steps of the Oviatt Library, but as the chants and marching began to fill the lawn, a massive swarm of students filed in and joined the growing line of demonstrators.

According to Carla Martinez, a member of Movimento Estudiantil Chicano de Aztlan (M.E.Ch.A), the protest was organized primarily via social media and word of mouth.

“We just had to do something,” Martinez said. “We all knew we had to come together today and so many different student organizations are here in solidarity.”

“This all came together after the results last night,” said senior Brittney Washington. “Carla [Martinez] reached out to me and asked if I could spread the word to EOP students, so we’ve all gathered last second, and we want to be heard.”

Freshman Michael Meeks, one of the more vocal members of the protest, encouraged his fellow students to express their concerns and to not “let the movement die.” Meeks was one of the first students online spreading word of today’s protest after news of the election results.

“It’s crucial that we get the word out,” Meeks said. “The main thing we can do is protest and continue to push for change.”

During the final 30 minutes of the protest, the student demonstrators gathered in a circle and took turns expressing their frustrations. Students of different races promoted ideas of unity, solidarity and resistance.

One student brought a Trump-shaped piñata for protestors to batter, but Meeks and Martinez removed the piñata from the circle. Protesters then chanted “el pueblo unido jamás será vencido,” which translates to “the people united will never be divided.”

Joining the protest was CSUN’s President Dianne Harrison who expressed support for the students.

“I think that all of us are going to have to do everything we can to protect what we have and to protect the diversity of our campus,” Harrison said.

She also expressed her thoughts over the future of the country under President Donald Trump.

Participating in the protest was 20-year-old sociology major Ana Yepez.

“We’re feeling very devastated,” Yepez said. “My cousins are here because of the Dream Act, and I’m afraid that if Donald Trump succeeds in repealing it, a lot of my family will be devastated and have to leave.”

Click here for an inside look at the protest.

This story will be updated throughout the day.