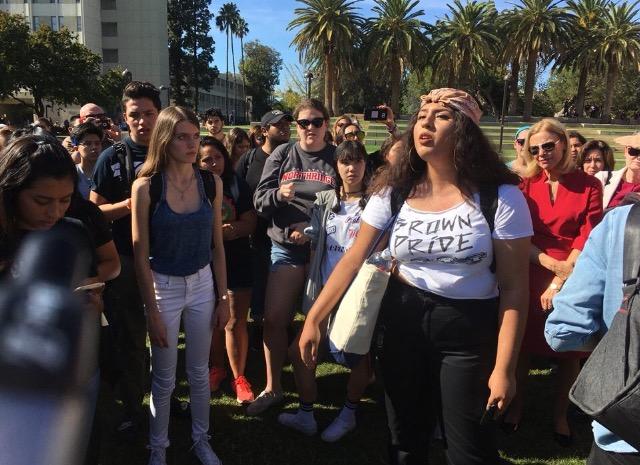 With the projection of Donald Trump to be the next President of the United States, Dreamers at CSUN are concerned for their wellbeing moving forward.

The coordinator of the Dream Center Dario Fernandez said there will be attorneys coming to campus on Nov. 10 for students.

“They will be giving information as to the legal context of having deferred action status,” Fernandez said.

According to US Citizenship and Immigration Services, this entails Consideration of Deferred Action for Childhood Arrivals (DACA), which helps children and younger people living in the United States who were not born here.

“This is being done given what has happened,” he said. “We do have university services to structure this. Right now, it’s to come to the immediate need of students.”

During a protest in front of the Oviatt Library, students reacted to the Election Night results where Republican candidate Donald Trump won to become the next President of the United States.

“I’m feeling angry,” said Anisa, a student who is also a member of MEChA. “Last night I was feeling sad, I did cry, but I’m not scared of the white man. So I’m not scared of white people [any]more, I’m scared of what they can do to my people, my friends who don’t have a voice.”

Other students were more frustrated by the results.

“I was pissed. Today we want our voices to be heard,” said freshman Mark Anthony Ninapaypan, a Dreamer and also a member of MEChA.

Fernandez said that everyone is still trying to process what has transpired, and that the Dream Center is here to help students and the overall campus community.

“A lot of the fears that some of our students might be living with, with the rhetoric and climate, they have already taken place with the previous presidency, with deportations,” he said. “It’s an issue that’s rampant.”

Speaking in front of several students at the protest, David Chino Contreras voiced a frustration similar to Ninapaypan.

“The president is racist and has shown that America is too,” said Contreras, a Chicano/a Studies major, referring to President-elect Trump. “There’s Trump supporters here at CSUN. There’s all this internalized racism, people on their own, hating on their own and we don’t notice it. Are we going to organize, are we going to protect our own?”

While there are those who are frustrated, Fernandez said this is to be expected.

“Ultimately, elections are a reflection,” Fernandez said. “If history shows us, it always goes back and forth.”

Dede Ogbueze contributed to this article.