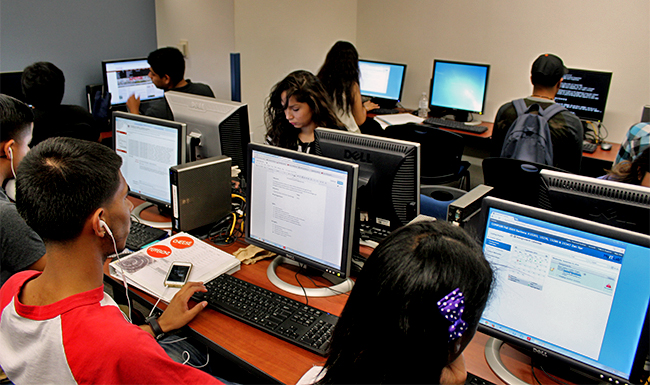 Moodle will no longer be used at CSUN starting Dec. 30, 2017. Instead, Canvas was voted as the new learning management system (LMS), promoting better tools and features for students and faculty.

All faculty, according to Associate Vice President of Academic Technology Deone Zell, were invited via email to participate in the evaluation of LMS last spring. Those who participated were able to vote, resulting with Canvas as the winning choice.

Among the evaluated LMS’s were Moodle, Canvas, Brightspace (Desire 2 Learn), and Blackboard.

“That sucks for people who have gotten used to Moodle,” said Mikka Lao, senior psychology student. “They should ask the students because they are the ones who are using [the LMS].”

“Although Canvas is a higher cost than Moodle,” said Zell in an email, “it offers a modern intuitive interface, with the opportunity for more engagement and enhanced communications between faculty and students.”

Along with the modern design and intuitive features, Canvas also comes with a highly-rated mobile app.

Zell said via email that the entire California Community College (CCC) system is making its way to Canvas, meaning that some transfer students should be familiarized with it.

Lao, who recently took a summer course at Pierce Community College, was already introduced to Canvas. She expressed a negative experience with the LMS.

“The professor didn’t know how to use it, so that was difficult,” said Lao.

She explained that massive amount of emails were sent after any little adjustment made by the professor. There were complications with changing time-limits and deadlines, and registering required her to make an account with Outlook.

“That was annoying and unnecessary,” she adds.

However, the faculty technology center (FTC) will offer support to faculty for this transition through the use of workshops, tutorial videos, forums, how-to-guides and instructor training courses.

Students can find support guides through the Canvas website, campus information technology (IT) helpline, or in-person help at the Technology HelpDesk at the Oviatt library.

Moreover, students and faculty can experiment with Canvas for a couple of semesters while Moodle is still around. Canvas will be available for classroom use beginning spring 2017, and it is not until spring 2018 that it becomes the only LMS.

Mechanical Engineering Professor Michael Kabo was not able to participate in the decision-making due to a conflicting schedule, but he remains positive about the change.

“Moodle was much better than the process we had before,” said Kabo. “I’ve been satisfied with it, but I’m open to change.”

A popular concern among faculty is whether course material on Moodle will be transferable to Canvas.

According to the CSUN IT website, backing up and importing material from Moodle to Canvas is doable, with the exception that some material will appear differently due to the change in tools. Applications such as Turnitin and Respondus are also said to function with Canvas.

Moodle can be frustrating for 21-year-old student, Itzel Castañeda, who expresses her frustration when professors do not update or easily lay out the course material.