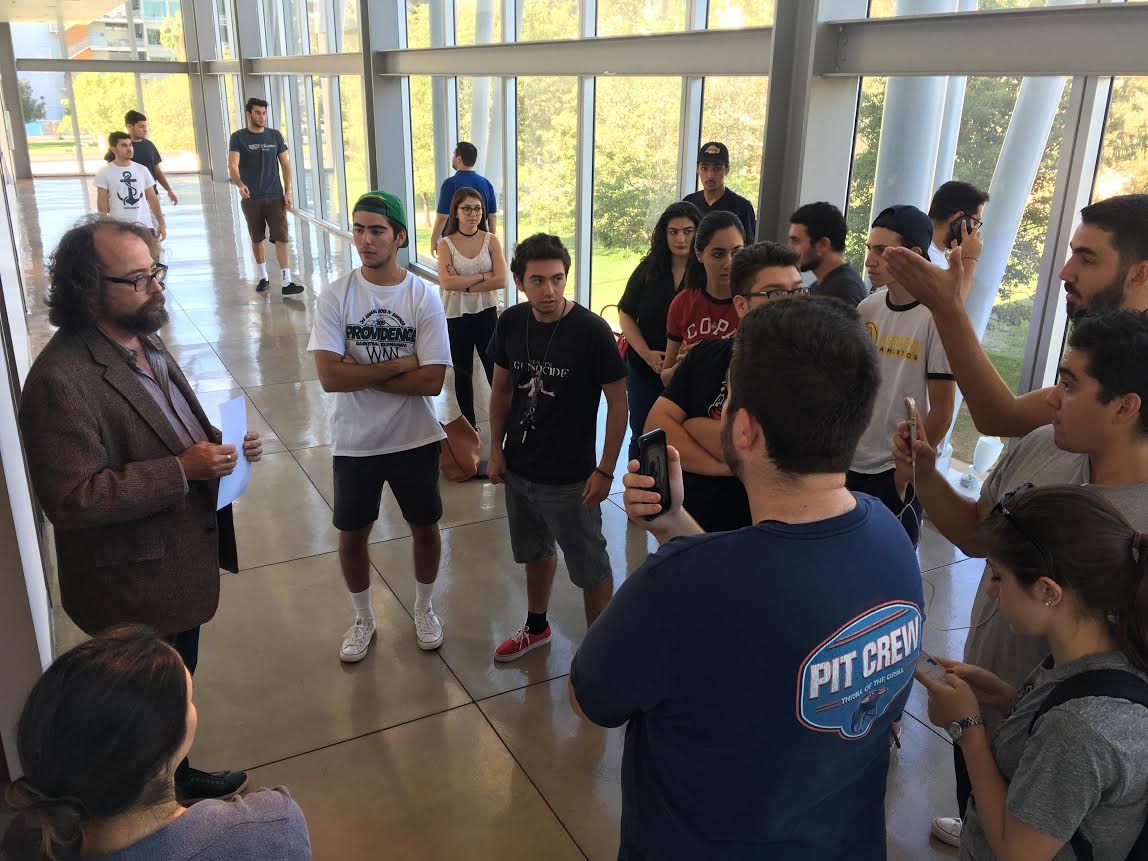 Members of the Armenian Student Association, Alpha Epsilon Omega and Alpha Gamma Alpha gathered outside of the Aronstam library to continue to protest in front of CSUN professor Owen Doonan on Nov. 10, 2016. Photo credit: Elizabeth Vazquez

Scholar George Gawrych got through no more than five sentences during his presentation on his book about Turkish army officer Mustafa Kemal Atatürk before students raised their voices in protest Thursday at the Aronstam Library in Manzanita Hall.

Over 20 protesters stood up from their seats, turned their backs on Gawrych and repeatedly chanted “Turkey guilty of genocide” and “genocide denialist.”

Gawrych waited briefly as other attendees voiced their opinions to let him speak, until he began walking up and down the aisle trying to get the protestors to face him.

Two police officers who guarded the entrance escorted Gawrych, a Baylor University Boal Ewing chair of military history, out of the library to sounds of chanting protesters.

“Our initial message was to stop the denial of genocide that cost the lives of millions,” said Eric Badivian, an Armenian protestor.

Many Armenians feel that Gawrych’s book “The Young Atatürk: From Ottoman Soldier to Statesman of Turkey” praises a leader who played a role in the Armenian genocide.

“This man coming here and claiming these claims that genocide didn’t happen is completely absurd and people know,” Badivian said. “There’s factual evidence to this happening all around.”

Gawrych was unable to speak about his book or comment on the protest once police had him leave the library.

The book received the Distinguished Book Award in 2014 from the Society for Military History, according to Gawrych’s Baylor University biography page.

John S. Harrel, who holds a masters degree in history from CSUN and authored “The Nisibis War,” said he expected this protest to happen.

“They are only interested in keeping you and I as being non-Turkish and non-Armenian from finding out both sides,” Harrel said.

Harrel added that Armenians have a legitimate grievance.

He also suggested that a lot of information about the Holocaust was discovered after scholars looked back at history to study the Third Reich.

Art history professor Owen Doonan, who invited Gawrych to speak for the Middle Eastern Islamic Studies program declined to comment to The Sundial about the protest, but did address protestors outside the library.

The Armenian Student Association, Alpha Epsilon Omega and Alpha Gamma Alpha sent a protest-letter to William Watkins, dean of students, expressing their concern and disappointment in having the guest lecturer at CSUN.

“It is quite bizarre that an event revolving around the ignorance and injustices against humanity is being allowed to take place on campus,” as stated in the letter to Watkins.

Watkins later replied in an email sent to the organizations, addressing their concerns.

“The university shares your commitment to the pursuit of truth about all aspects of Armenian history and to never forgetting those who have suffered from the tolerance and actions of others,” Watkins wrote in the email.