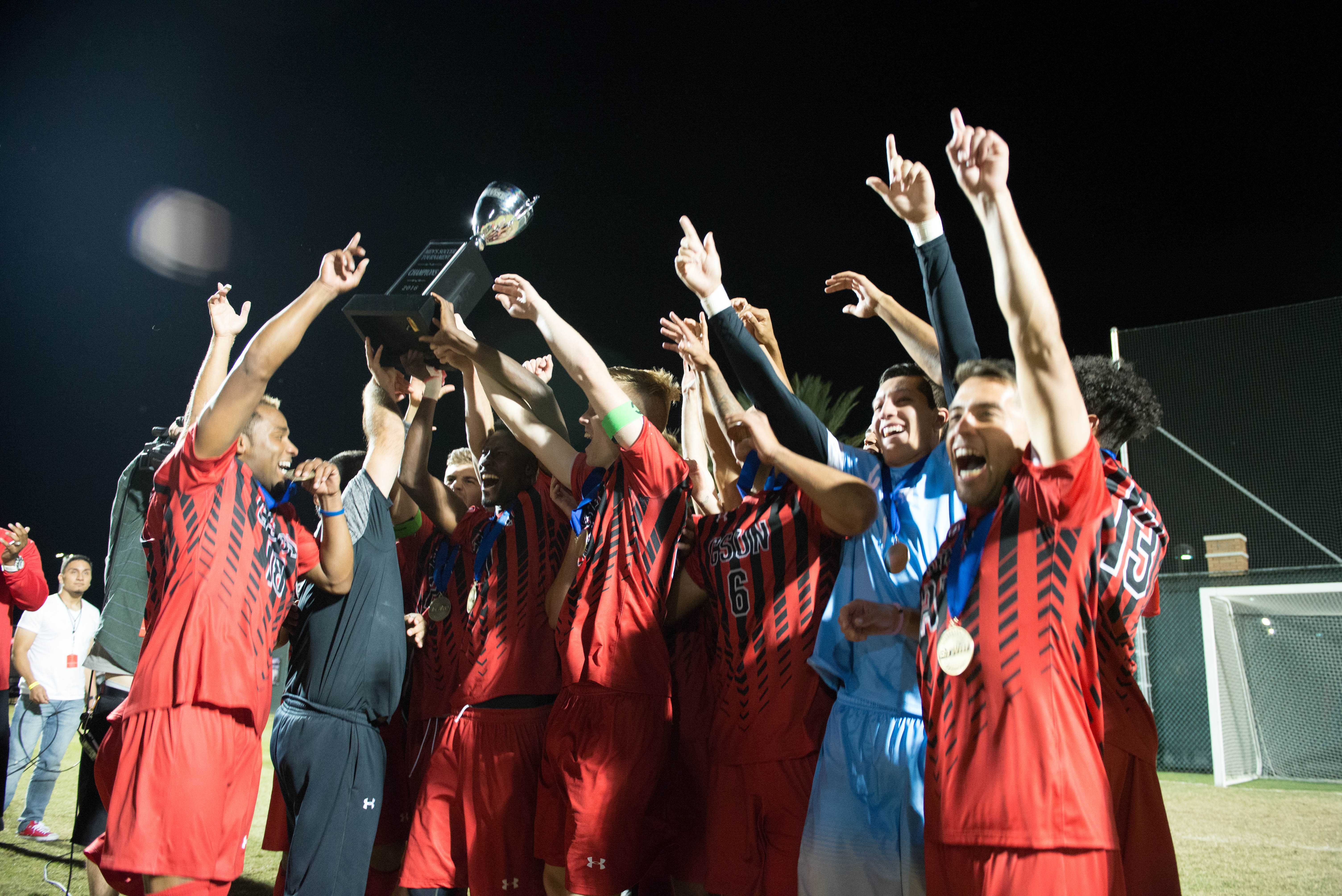 The team holds the Big West Tournament trophy together with their medals celebrating their win. Photo Credit: Alejandro Aranda/ The Sundial

The CSUN men’s soccer team defeated the Cal State Fullerton Titans, 2-1 in double overtime to be crowned the 2016 Big West champions and reach the NCAA tournament.

The Matador Stadium hosted the final game of the Big West tournament between the Matadors and their division rivals. The stands were packed and split down the middle between Matador and Titan fans.

The first half saw the Matadors forced into their own half playing on their back heel as the Titans controlled the game with their quick short passing.

The Titans first half performance silenced Matador fans, and brought theirs to life. They controlled the ball the entire half that the Matadors finished with zero attempts on the Titan goal.

The Matadors were fortunate when the 28th minute penalty appeal was waived off by the referee, keeping the game even at halftime.

The second half saw the Matadors come out of their locker room trying to improve from their first half performance.

The Matadors began the half with their first attempt on goal when defender Patrick Hickman flicked a throw in from fellow defender Gabe Robinson towards the goal.

Keeper Kevin Marquez made a one-on-one stop in the 53rd minute when he was able to deflect a low shot away from his goal.

The Matadors were beat on a Titan corner kick at the front post which was flicked into the back of the net away from Marquez’s reach.

After the Titans’ goal, the Matadors felt a sense of urgency and they began to take control. Chances were created by defender Jumoke Hutton, midfielder Juan Fernando Samayoa, and Robinson.

The Matadors’ persistence paid off in the 78th minute when midfielder Edwin Quiroz took control of a deflected ball and ran towards the right corner of the box where he sent a curved shot into the top left corner of the net to tie the game.

When asked about his game tying goal, Quiroz said he came in pretty hyped and head coach Terry Davila told him to just go at them.

“I saw a one versus one, I cut him and buried it,” Quiroz said.

The game ended even at one a piece, making the Matadors and Titans look for that championship goal in overtime.

In the first overtime half, the Matadors had a chance to claim the title when the referee called a penalty in their favor.

The penalty was attempted by Samayoa, but his shot was stopped by the Titan keeper, ensuring the game would reach the second period of overtime.

When asked about the missed penalty, Davila said he would choose Samayoa again.

“Fernando has been our man all year, he wanted and you know what he would take it again,” Davila said.

In the second period the Matadors found some chances, but could not beat the keeper.

With the game headed towards penalty, midfielder Shane Steffes made a run towards the box but had the ball hit away from him towards midfielder Jeremy Degraffenreidt.

Degraffenreidt was able to control the ball and send a low shot past a rushing keeper and into the back of the net giving them the championship and a NCAA berth.

When asked about his game winning shot, Degraffenreidt credited Steffens who beat three defenders to give him the attempt on goal.

“Without Shane, that goal was not going to happen,” Degraffenreidt said.

In 119 minutes, the Matadors were able to celebrate at home with their fans as they were crowned the 2016 Big West Champions. They also saw keeper Kevin Marquez win tournament MVP, and reach the NCAA tournament.

When asked if he ever envisioned having a season where he would win keeper of the year and tournament MVP, Marquez said no he did not, but it would not have happened without his team.

“It’s unbelievable, I do not have words to describe it,” Marquez said.

The Matadors will learn their fate in the NCAA tournament on Monday when the tournament selection takes place.