CSUN wins 2 out of 3 in Arizona 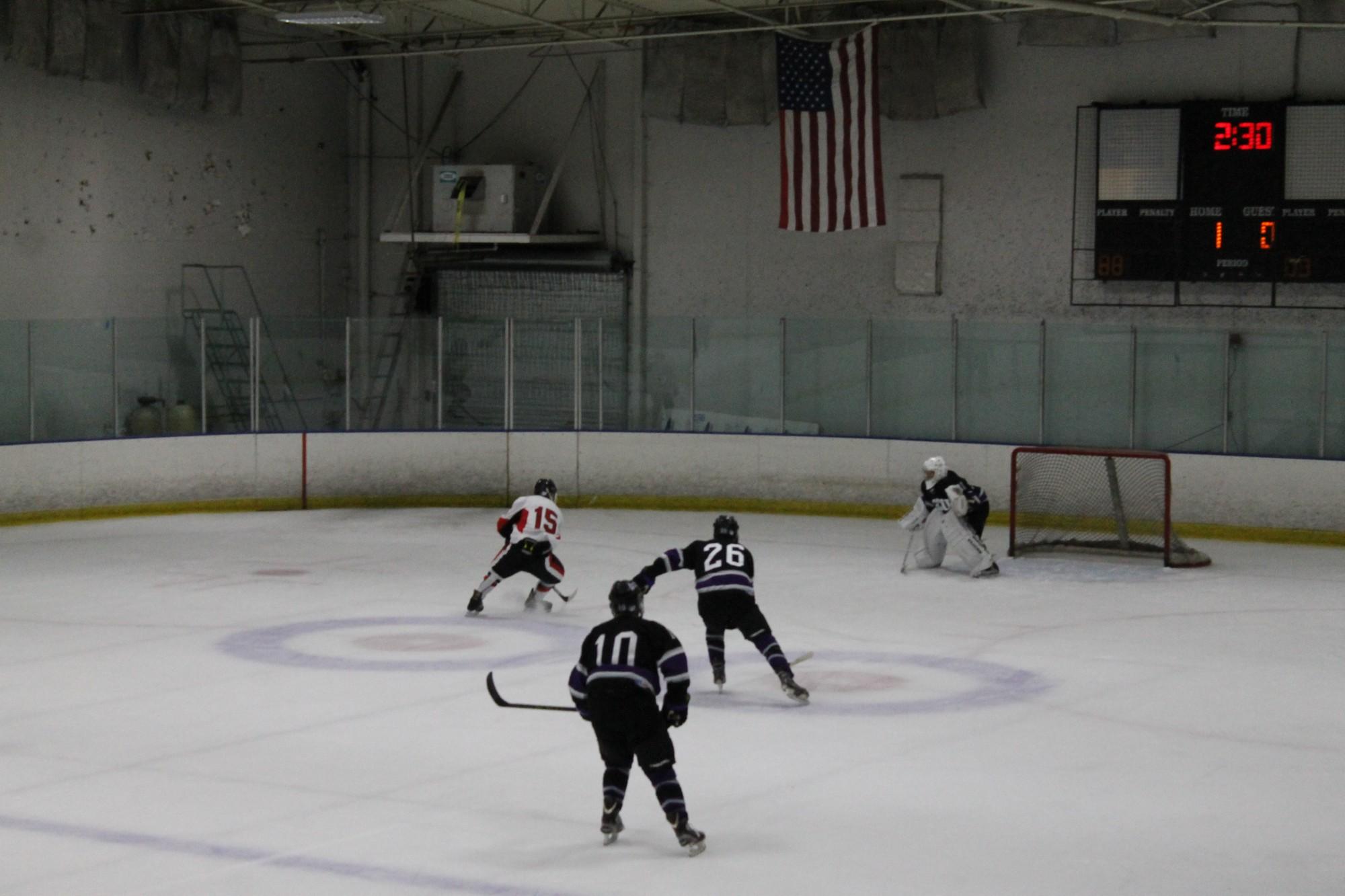 (15) Quentin Abaya skates in all alone as he attempts to put CSUN up 2-0 with a short-handed goal passing defenders (26) Brett Kramer and (10) Tate Erickson on Oct. 24 at the Iceoplex in Simi Valley. Photo credit: Solomon Ladvienka

The Matadors hockey team defeated No. 19 Arizona State and Grand Canyon University over the weekend, but fell short to No. 5 Northern Arizona University.

CSUN stands at a record of 15-2-0-1 and is currently ranked 13th in the ACHA West Region. Following their loss last week to Long Beach State, the ACHA committee rewarded the Matadors with the (+1) ranking following tough outings from the higher ranked teams.

“Beating ASU for the first time in nine years is a huge accomplishment,” said head coach JP Gale. “It’s the first time since 2008 and they’ve been a perennial powerhouse the last five years, so we’re happy to put together such a strong win.”

When CSUN scores first in games, they are 8-0-0-1. Captain Alex Reints did just that to get the team an early 1-0 lead. The Sun Devils tied the game, but Reints gave CSUN the lead with a powerplay goal in the second period. Team leading goal scorer, Eli Berengut, chipped in the third goal to give the Matadors the victory.

“We came together as a team and won as a team,” said Cameron Rorick. “It was a team effort to beat ASU.”

CSUN then traveled to Northern Arizona to face off with the Ice Jacks. Lucas Lomax gave the Ice Jacks an early 2-0 lead and CSUN had difficulty getting back in the game.

“We stressed that NAU was the faster and more skilled team and we had to be physical with them in order to have a chance, but I think the boys were watching and not getting involved in the first period,” Gale said. “The second period was much better and we were able to slow them down, but we lost focus in the first few minutes of the third period and gave away easy goals.”

A short handed goal in the second gave NAU a 3-0 lead, but Garrett Heftye was able to get CSUN on the board and showed poise for CSUN to come in the third with the score 3-1.

NAU scored four unanswered goals in the third period to push the margin to 7-1.

“We have to hang around with [NAU] to prove to the ACHA Committee that our team is a valid contender for a higher ranking,” said Travis Van Noty, Matador Sports Network broadcaster. “We want to win, but if we keep these games close with the higher ranked teams, and lose, the committee should reward us based off of the strength of schedule even with the loss.”

CSUN scored three unanswered goals of their own late in the third from Ellis Bourgoujian, Cameron Rorick and Evan Sharpshair, but it was not enough. The game ended 7-4.

“We had a weak first period against NAU, and that got us off on the wrong foot,” Rorick said. “The second period was a better period but we broke down as a team in the third and NAU’s lead was too large for us to come back in.”

The Matadors regrouped as they faced off for a second time this season with Grand Canyon University. CSUN defeated GCU earlier this season, 6-2 and took another with with a score of 4-1 Sunday night.

Reints contributed with another pair of goals, as Heftye and Evan Wright propelled CSUN for the win.

“We dominated GCU by out-shooting them 50-14, the widest margin I think we’ve ever had in Division 2,” Gale said. “This game might have been the best game we’ve played this season. Northern Arizona University was the first top five team we’ve played against and with 11 new players on the team this season; they weren’t used to that level of play. After the third period against NAU, I think the men realized that they could play with anyone.”

The 13th ranked Matadors will be on the road again this upcoming weekend in Wyoming. This will be the Matadors’ first ever trip to the University of Wyoming and the two teams will face off in a pair of games Friday and Saturday night.