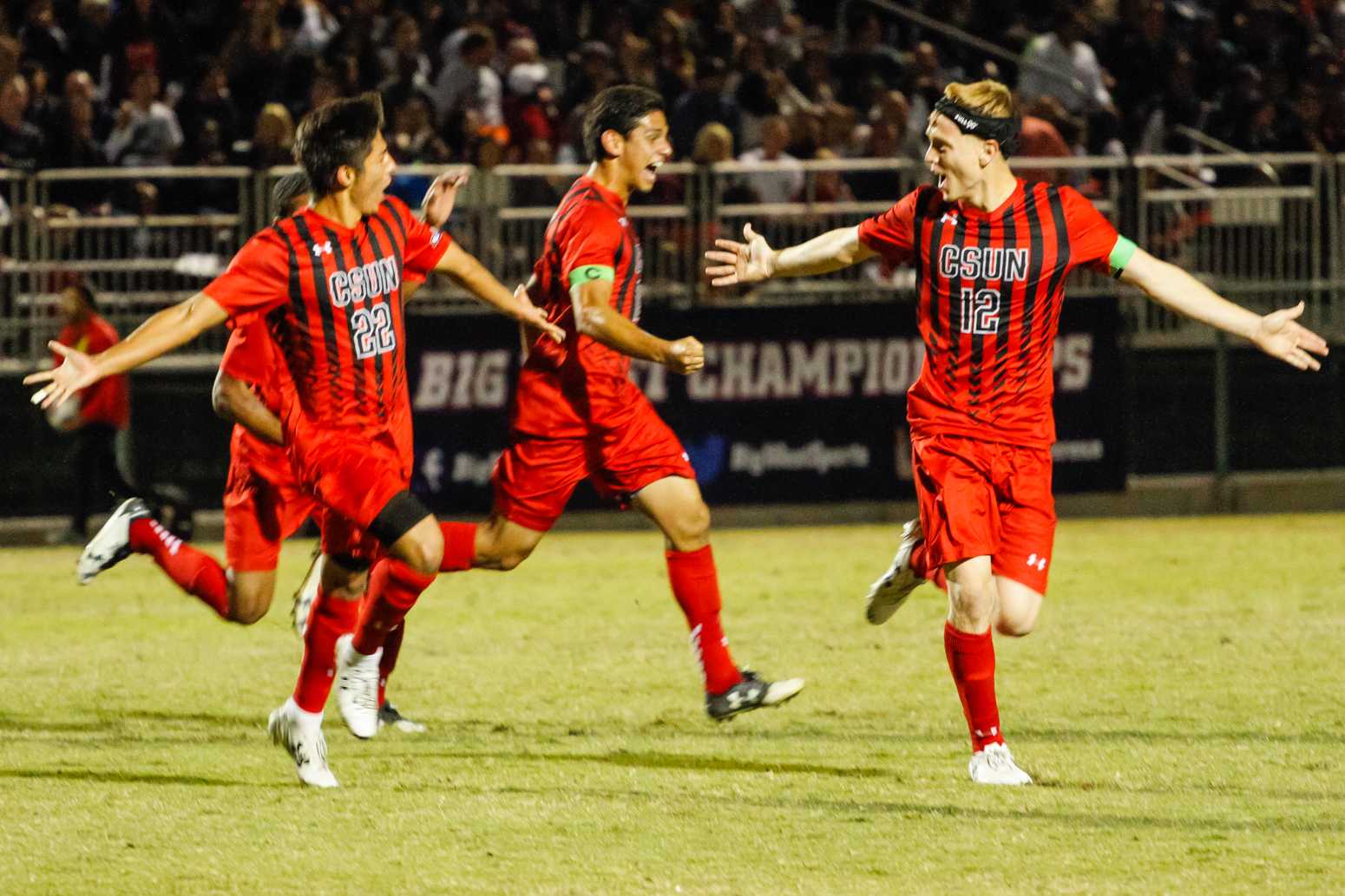 Freshman midfielder Edwin Quiroz (22) celebrates with senior Shane Steffes (12) after scoring a game-tying goal in the second half of the Nov. 12 match against CSU Fullerton at Matador Field. Photo credit: Ricardo Varela

The Big West Tournament championship game went into double overtime until CSUN was able to get the game winning goal giving them a 2-1 win.

In the second half, Fullerton made the first mark on the scoreboard giving them a 1-0 lead until freshman Edwin Quiroz tied up the game with a shot to the left corner.

With a tied up game and a Big West Championship title on the line, the teams fought into a double overtime until forward Jeremy Degraffenreidt scored the game winning goal with 52 seconds remaining, avoiding the game going into penalty kicks. The goal was assisted by midfielder Shane Steffes.

The golden goal was Degraffenreidt’s second of the season and Quiroz took his second goal of the season with the tying goal in the second half.

“It felt amazing to get the game winning goal,” Degraffenreidt said. “Without Shane, that goal would have never happened, so I thank Shane for that goal.”

Goalkeeper Kevin Marquez took away the Most Valuable Player trophy. Although this is Marquez’s senior year, it is his first season starting for the Matadors. He has 95 saves under his belt with a .798 save percentage. He was also named Big West Goalkeeper of the Year earlier this month.

CSUN men’s soccer are the Big West South Division champions, Big West Tournament champions and now will be heading to the NCAA Tournament for the first time since the 2013 season when they hosted Stanford.

“It’s a surreal feeling, especially knowing it is my senior year,” said forward Richard Martinez. “It’s great to know that all the practices, treatment and meetings have paid off. Now, we need to do our best to stick to the game plan and make a run in the college cup.”

With a 9-6-5 record, CSUN will host University of Pacific for the first round of the NCAA tournament Thursday at 7 p.m.

“It’s also an amazing feeling, but also just as deserving, we’re not surprised at all we made it here,” Degraffenreidt said. “We’re not scared of any team we play, we’re ready to continue our season.”

This is the Matadors seventh appearance in the NCAA tournament and will be their fourth time being the host.

All seven appearances have been under head coach Terry Davila. He has been with the Matadors for 17 seasons and won Big West Coach of the Year earlier this month.

“It’s an unreal experience not only to win the conference, but also the Big West Tournament at home in front of our home crowd was incredible,” said senior midfielder Juan Fernando Samayoa. “Going to the NCAA Tournament is every student athletes dream and to get the chance to host the first game is amazing.”

This is the University of the Pacific’s first time ever in the NCAA tournament.

Between CSUN and Pacific, the winner will be playing No. 8 Stanford University in the second round Nov. 20.