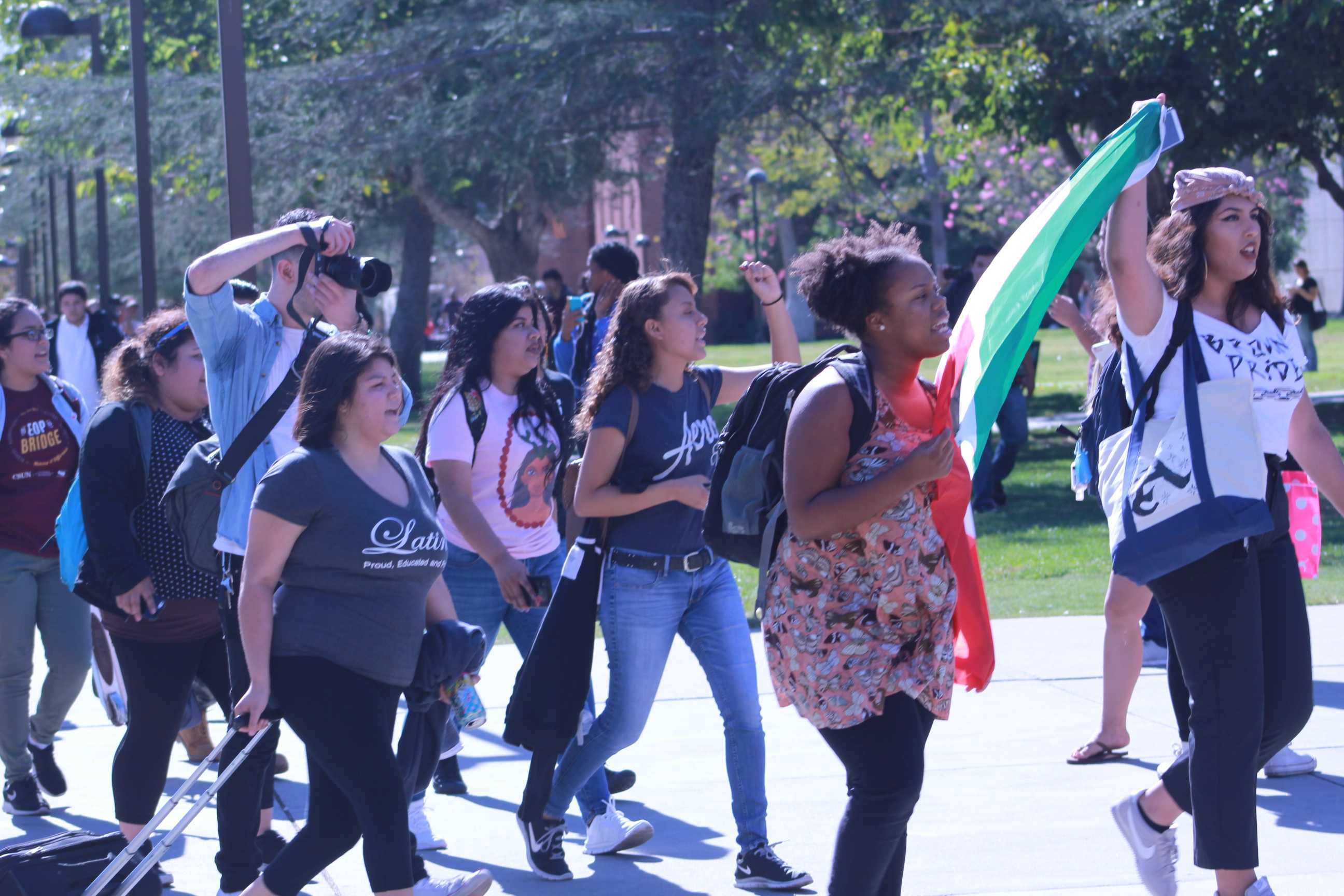 A group of CSUN students walking toward the Oviatt Library to protest the election of Donald Trump on Nov 9, 2016. (Jasmine Perry / The Sundial)

Last week at CSUN, there were protests on campus around the election. There were also protests about the Armenian genocide. One protest occurred at the on-campus livestream of the popular news show, “The Young Turks,” an online news program airing daily on YouTube with over 60 million views per month.

The show is the brainchild of Cenk Uygur, an American broadcaster of Turkish descent. Ana Kasparian, an American broadcaster of Armenian descent, is a host for TYT. She is also a columist for “Raw Story” and a two-time graduate from CSUN. TYT is traveling across the U.S., airing from campus theaters at a number of schools, including USC, George Washington University and Harvard.

Kasparian was the host when the show was on campus on Wednesday, Nov. 9 to livestream from the Little Theatre in Nordhoff Hall. At the CSUN show, a student from CSUN was asked to answer a question about the Trump election, but instead he read part of a statement about the Armenian Genocide. The show went off-air and an argument ensued between Kasparian and the student.

Kasparian’s comments were measured. She said she hoped to continue the dialogue and that both sides could understand each other’s positions. When asked about genocide denial by the student, she clearly stated she is not a genocide denier.

What ensued was neither a truth-finding mission nor a peaceful dialogue. Instead, there was a lot angry shouting in Armenian between audience members and protesters. According to my Armenian colleague, the words used were the kind of words that should not be said.

The next day, I spoke with my media law students about the protest. One thought TYT show airs from Turkey. Another said that Uygur is a genocide denier. I wasn’t sure about either of those ideas. Also, while it is true that Uygur once questioned the genocide when he was a university student decades ago, he recently posted a statement on the Young Turks website rescinding what he thought way back when.

The other protest took place Nov. 10 at a guest lecture by Dr. George Gawrych of Baylor University regarding his new book about Turkish history, “The Young Ataturk.” At the start of the book reading, over 20 protesters stood up from their seats, turned their backs and repeatedly chanted, “Turkey guilty of genocide” and “genocide denialist.” In the hallway after the protest, I spoke with two Aremenian students. One was the student who read the protest statement at TYT show the night before.

The Young Turks revolution (the revolution, not the show) is part of the history of Turkey, that includes the genocide in which 1.5 million Armenians were murdered, including hangings and a death march. It is illegal to talk about the genocide in Turkey.

But it is not illegal to discuss these things in the U.S.. Still, the United States and many other countries refuse to recognize the genocide, because of ongoing diplomatic and economic relations with Turkey.

The students told me, “a genocide unpunished is a genocide encouraged.”

Are we allowed to use words in a new context with a new connotation? Yes, I suppose. It’s a free country. Words can change meaning over time. But isn’t it also free expression when those deeply affected take offense to the ahistorical use of words and protest the name of a show?

Turns out my first thoughts were wrong. The name Young Turks has been used to refer to at least eight or nine different groups in history, including a group of young Republicans in the 1960s in the U.S., a political group in Thailand in the 1970s, and a group of Russian advisors to President Boris Yeltsin in the late 1990s.

My guess is that not many who watch TYT (the show, not the revolution) know about these many historical meanings. People probably don’t think it refers to the group that enacted genocide in 1915. I’m entirely sure the show doesn’t mean to insult Armenians, but I can understand why they are insulted. At the same time, I’m of the opinion that they are wrong to mix up the show with genocide denial. Looking online, it is easy to find a report by Kasparian taking the position that the U.S. should recognize the genocide. It is also easy to find the online statement of Uygur, rescinding an article he wrote as a student. Words can change meaning and people can change their minds.

But had students not protested at these events, you might not be reading about the genocide right now.

At the end of the day, free speech in the university setting allows us to learn the facts and expand our minds. Free speech over time allows us to change the positions we once took.

The theory of free speech is that the truth eventually comes out, because we can talk our way through all the falsehoods and misunderstanding.

Thankfully free speech moments happen often at CSUN, giving us all the opportunity to get a bit closer to the truth.

Elizabeth Blakey, J.D., Ph.D., is an assistant professor in the Department of Journalism at CSUN and a member of the California Bar.