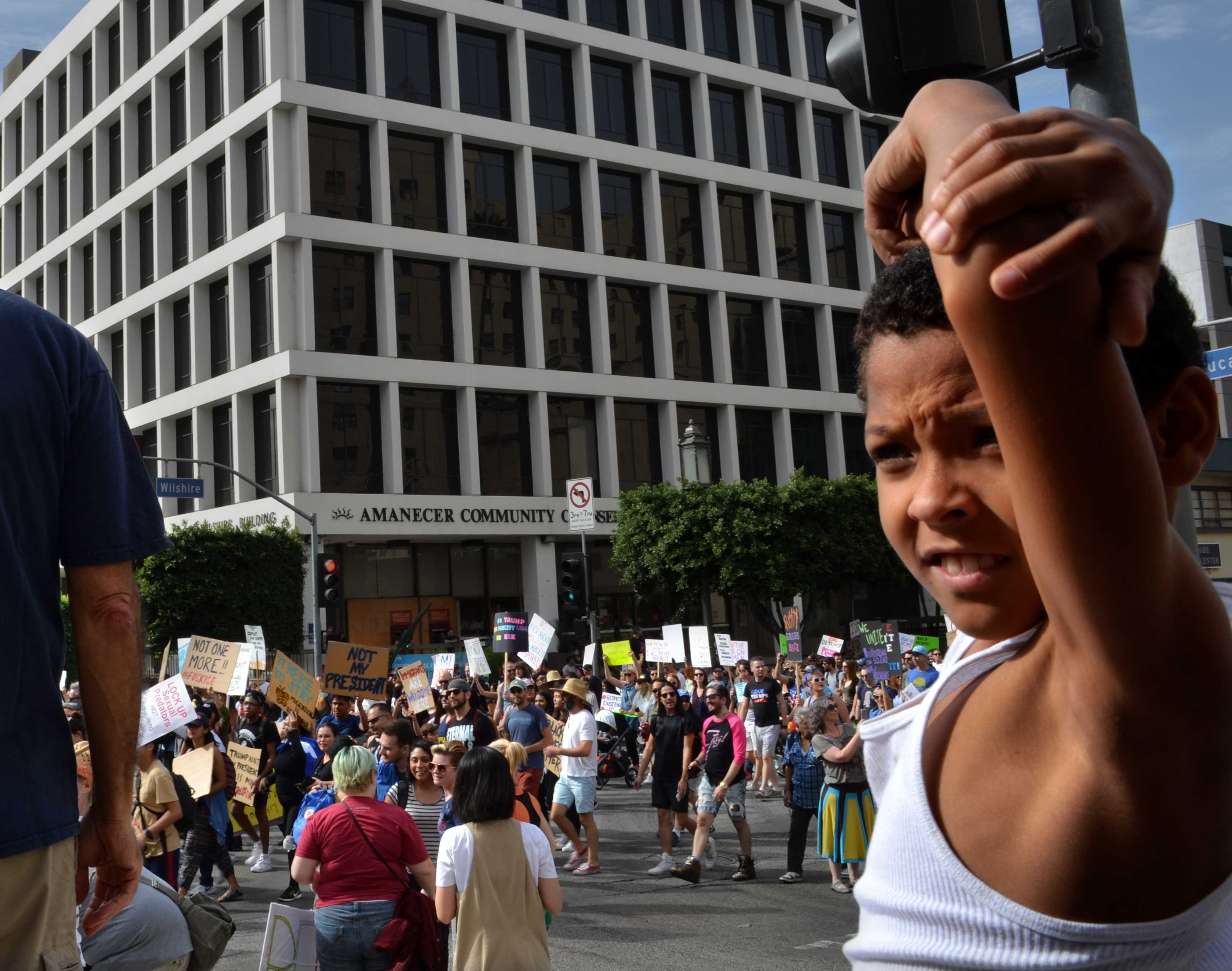 Jaden Frauchiger (right) and his mother, Keiarerah Frauchiger (off camera), were on their way home when they came across thousands of people walking down Wilshire Blvd. in Downtown Los Angeles voicing their dissatisfaction with Donald Trump's victory in the 2016 election. Jaden had never seen a protest before, so he and his mother observed the march while Keiarerah explained the concept of civil disobedience to her son.

Anti-Trump demonstrations have erupted throughout the country in the wake of last Tuesday’s election results.

One of the largest protests so far occurred Saturday morning near MacArthur park in downtown Los Angeles.

According to The Los Angeles Times, 8,000 people attended Saturday’s protest.

Demonstrations are said to have taken place in New York, Chicago, Los Angeles, Portland, San Francisco, Philadelphia, and many other cities throughout the country.

Most demonstrators have expressed discontent with the president elect’s stance on immigration and women’s rights, as well as his general lack of political experience.

One demonstrator who was present during the Saturday demonstration in MacArthur Park, a professor of Native Mexican American and U.S. histories from Mount San Antonio College, April Tellez shared her concerns for the future.

“I am worried about the systematic racial profiling, the deportations and the assumption that we [Mexican Americans] are not completely citizens and that we are problematic to U.S. society” Tellez said.

Tellez went on to describe what she believes is an institutionalized system of fear and hate, a view which many other demonstrators and left leaning voices have echoed throughout the electoral process.

One of the most common slogans seen written on the signs of protesters during these post election protests read, “Love trumps hate.”

Crystal Rodriguez, 21, who was also present at Saturday’s demonstration, shared her reasons for protesting the election.

“I came to protest because unlike Trump, we don’t have the status or political platform to share our ideas across the world.” Rodriguez said. “This experience energizes people and generates knowledge, unlike Trump who further marginalizes groups of people who are already at a disadvantage.”