George Takei speaks at VPAC about wrongful imprisonment and sexuality 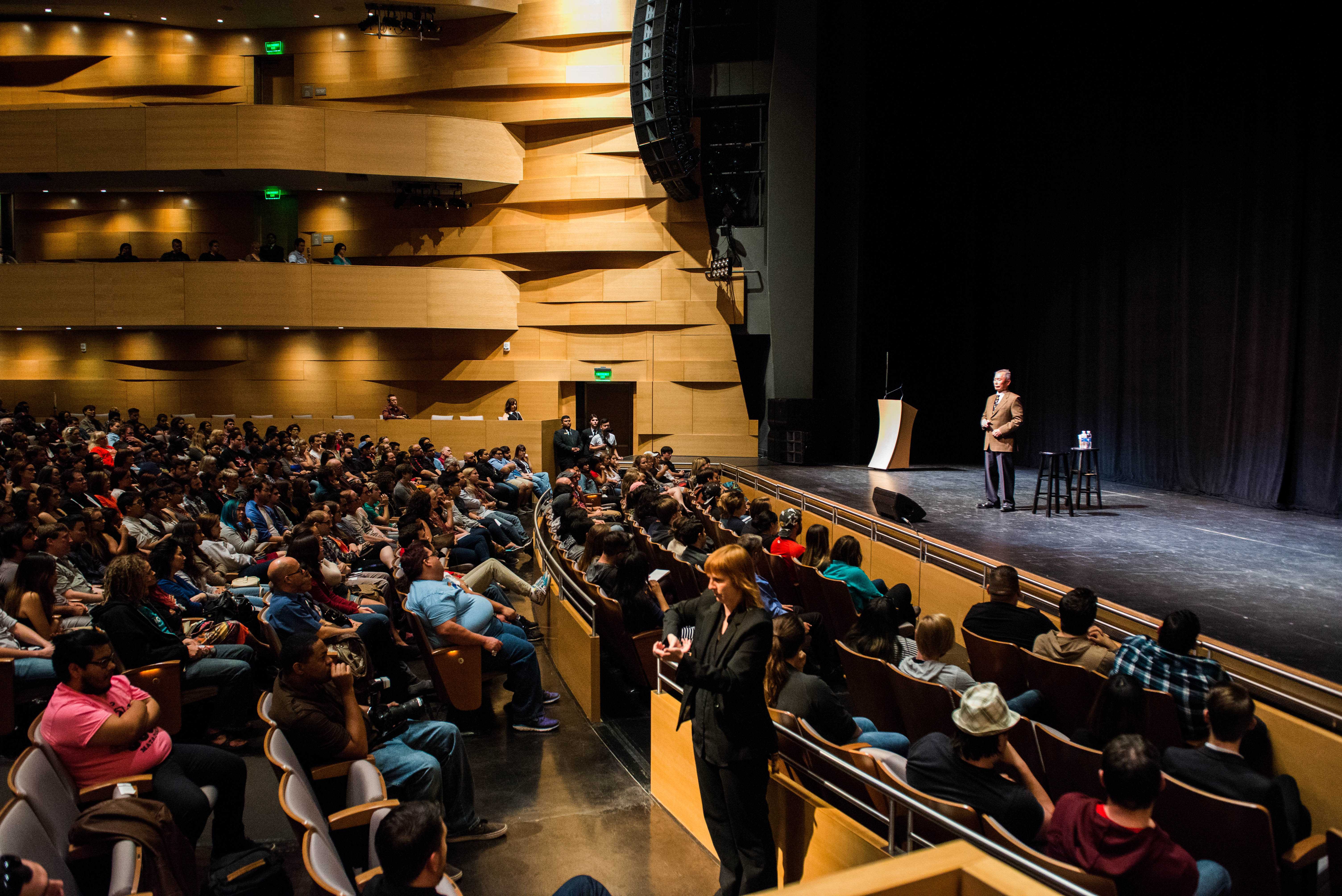 George Takei talks about growing up as an Asian American and a gay man in Hollywood. Vpac CSUN November 15, 2016. Photo credit: Alejandro Aranda

The University Student Union hosted an Evening with George Takei Tuesday night in the Valley Performing Arts Center where Takei spoke about his film and television career, wrongful internment and his sexuality.

Takei, who starred in the original “Star Trek” series and six Star Trek films as Hikaru Sulu, spoke to a large audience about his turbulent life.

CSUN graduate, Jae Kitinoja, was thrilled to come back to campus to hear Takei talk after graduating last year.

Takei came on stage and gave the Vulcan salute before saying his famous catchphrase, “oh my.” He began by speaking about his time spent on the set of “Star Trek” and how the series celebrated its 50th anniversary this past September.

He talked about how Star Trek reflected the turbulent times of the 1960s specifically mentioning the Cold War and the Civil Rights Movement.

He spoke of a “Star Trek” concept called “Infinite Diversity in Infinite Combinations” in which the members of the cast each represented a different part of the world. James T. Kirk represented North America, Montgomery Scott represented Europe, Uhura represented Africa, and Sulu represented Asia.

Takei pointed out that Spock was the biggest symbol of all, his character was the epitome of diversity since he was half human and half Vulcan.

“He’s one of those people that has an insane amount of perspective,” Kitinoja said. “The fact that he’s here to talk to us means a lot so I couldn’t miss this.”

Takei continued the talk by mentioning his wrongful imprisonment in an internment camp during World War II.

“I’ve lived through one of the darkest chapters in America’s history,” Takei said. “We were born, raised, and educated here, but we were categorized as enemy aliens because we looked like the people who bombed Pearl Harbor.”

He talked about how at only 5-years-old, he and his family were forced out of their home at gunpoint. They were put on a bus and sent to Arkansas where they were locked in an internment camp with barbed wire fences all around and searchlights that followed them when they walked to use the bathroom.

Takei explained that when the war ended, they were free to go, but they were sent home with next to nothing.

Alex McFadden, a cinema and television arts major, came to the event because he is a fan of Takei’s work both as an actor and as a social advocate.

“I’m just a fan of his acting and I really admire what he has done as far as his social causes and the messages he sends out to his followers and members of the LGBTQ community,” McFadden said.

Takei told anecdotes about how he went on double dates with one of his friends but was more interested in his friend than his date. He had to pretend like he was somebody different just to fit in and be popular.

He spoke about going to gay bars, but being in a constant state of fear of being exposed. Takei led a double life in which he would go out with a girl, but end the night at a gay bar.

“I was different in ways beyond my Japanese face,” Takei said. “I felt alone and a little isolated.”

He related his sexuality to his childhood because, in both instances, he did nothing wrong, but was criminalized and punished. By being a Japanese-American, he was wrongfully imprisoned and by being gay, he was in a constant state of fear.

Takei came out as gay in 2005 after Gov. Arnold Schwarzenegger vetoed the marriage equality bill in California because he felt like he could no longer stay silent.

In 2008, when marriage equality was passed in California, Takei married his longtime partner Brad Altman Takei.

“Our union lasted much longer than some of my straight friends,” Takei said.

USU staff member, Tim Rasmussen, knew people involved in putting on the event and is a big fan of what Takei has done for the world.

“It was an honor to hear him talk about his life story because of what he has lived through,” Rasmussen said. “I didn’t want to miss this opportunity.”

*Alejandro Aranda contributed to this story.