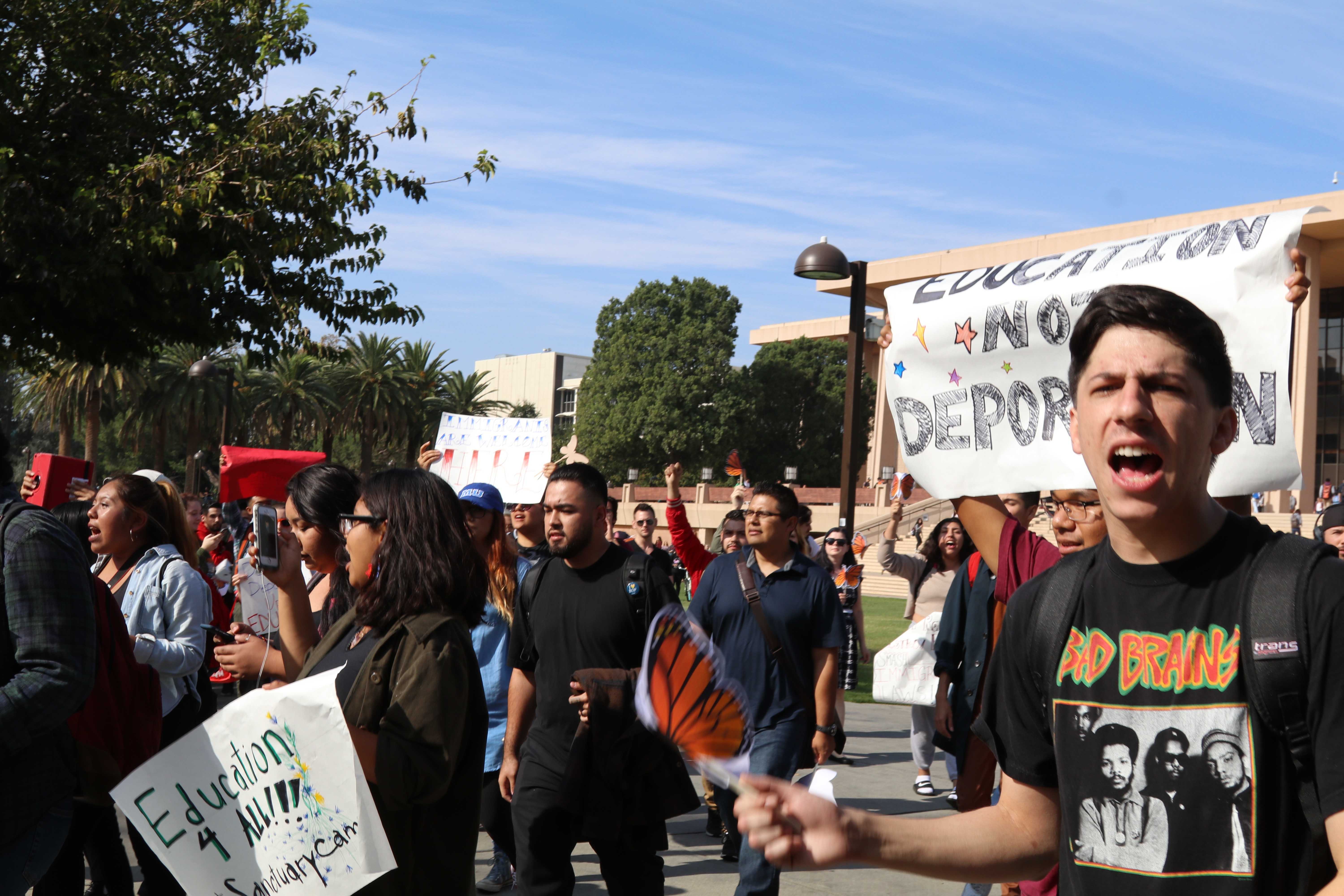 Protestors march in front of Oviatt Lawn around noon on Wednesday, calling for a safe campus for undocumented students. Photo credit: Blaise Scemama

Students strode through campus in solidarity Wednesday afternoon to promote a safe campus for undocumented students.

Protesters that were spread around campus met in front of the Oviatt Library to demand that CSUN administration provide a sanctuary campus.

Chants consisted of “up up with education, down down with deportation” and “hey hey, ho ho, deportation’s got to go” from roughly 100 protesters.

“What it represents is the student’s voices for a sanctuary campus for our undocumented students, and faculty and community members to know that CSUN is a safe place for them,” said Carla Martinez, 20-year-old deaf studies major.

Martinez, like other protesters, chose not to define exactly what a sanctuary campus means, suggesting that the term must be developed by undocumented students to serve their needs at CSUN.

“We already know the campus administration is supportive of undocumented students, but we want them to work with us in order to implement the term sanctuary school for CSUN,” Martinez said.

Protesters formed a circle to create a stage that allowed students and others to share feelings of fear, personal stories about being undocumented, and concerns about family and friends facing discrimination or the possibility of deportation.

“I’m so afraid for myself, for my friends” and “Even though we’re undocumented, we still have rights” were just some of the statements and ideas expressed during the protest.

Michelle Partida fought back tears and raised a fist as she told the group of supporters that she was an undocumented student.

“This rally bringing everyone together shows that we’re not alone as undocumented and there are people that are rooting for us to stay here for our rights,” said Partida, a junior CTVA major. “I just want to be in school and be successful like everyone else.”

The protest managed to gain student onlookers who had their phones out to capture it. Protesters offered the students the opportunity to join them and be a part of the demonstration.

A moment of silence for undocumented immigrants and those who risked their lives crossing the border also led protesters to sit quietly on the steps of the Oviatt Library.

“I feel like this a form of healing for the undocumented community”, said Iris Ramirez, 21, a Chicano studies major. “It feels great to know that [the protesters] have support on this campus. The only thing is that I’m still bothered by the fact that there isn’t more administration out here.”

Ramirez mentioned how campus administrators will have to do more than send an email to students, referencing an email sent to the campus community by CSUN President Dianne Harrison that addressed student’s concerns and denounced recent instances involving students being threatened.

Harrison was at meeting at the CSU Chancellor’s Office in Long Beach and was unable to attend the protest, according to William Watkins, vice president for student affairs.

“Whatever pain, difficulties our students are experiencing, we’re going to be a part of trying to help think through solutions,” said Watkins who was at the protest. “Certainly there is a tremendous amount of courage for these students to step forward publicly and to speak forcefully about the fact that they expect to be here and expect to enjoy access to gain an education”

Protests have emerged throughout the country in response to President-elect Donald Trump’s win on Nov. 8.

Trump said during his campaign that he would reverse President Barack Obama’s executive orders including the Deferred Action for Childhood Arrivals (DACA) that helps protect undocumented children from deportation.

According to CNN and SF Gate, NYU and Stanford also participated in campus walkouts on Wednesday. These students also demanded sanctuary campuses in response to Trump’s platform of making it a top priority to deport millions of undocumented immigrants.

People have been assembling to voice concerns for the Trump presidency and other political issues.

Trump has called many of the demonstrators “paid protestors,” but also praised protestors afterward.

“I feel that [protests] primarily bring light to the issues being presented,” Ramirez said. “For instance, birth control is a prevalent issue with this election’s results. Not only that, we’re also concerned for LGBTQA+ [community] and it brings visibility to the issues in an effort to address what is happening.”

As for protestors efforts to make CSUN a sanctuary campus, efforts are not expected to end.

*Dede Ogbueze and Melissa Arteaga contributed to this article.