Is there an Academic Advantage to Being Bilingual? 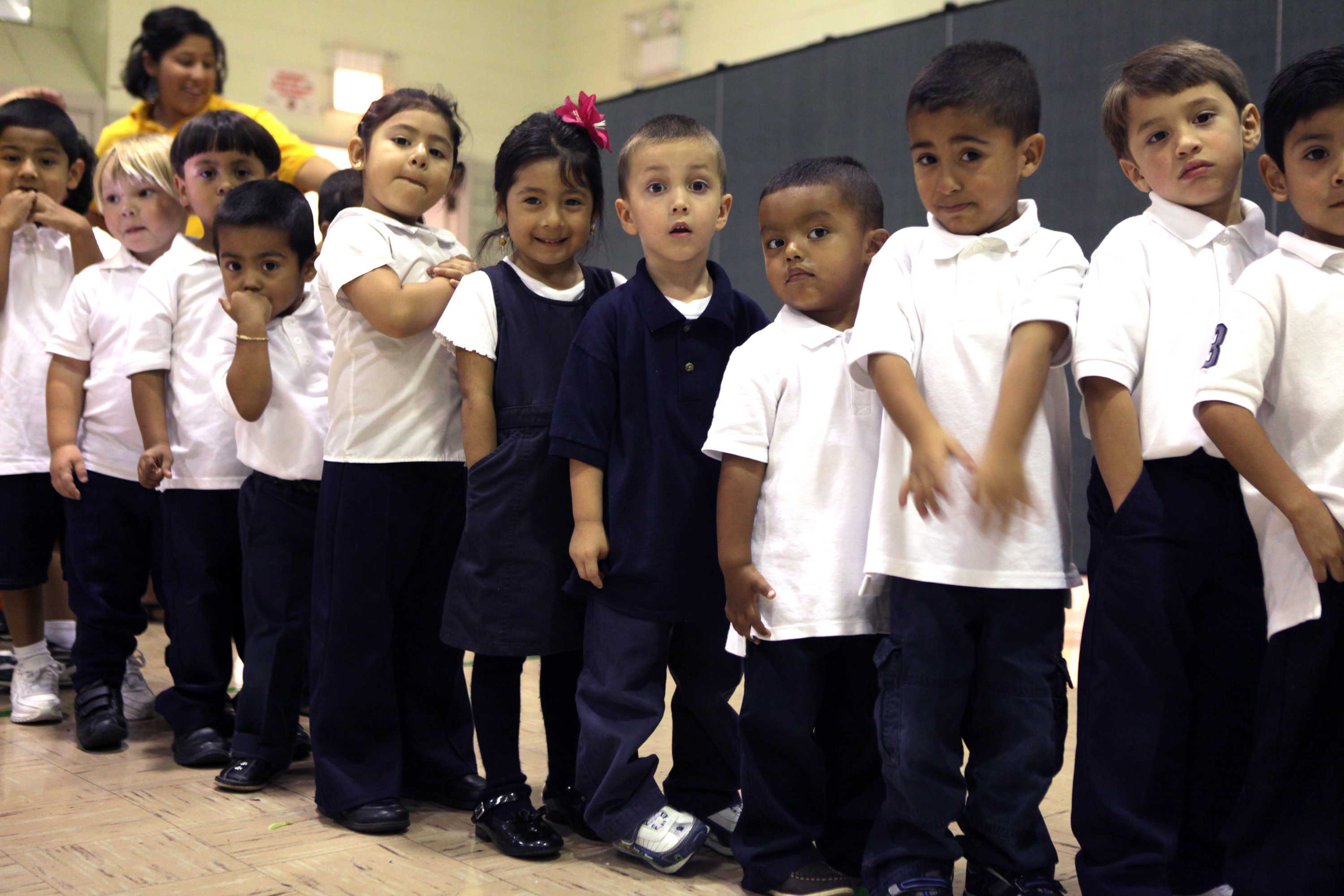 Students line up to go outside for playtime at Edwards Center for Young Learners, a bilingual preschool for three and four-year-olds on the southwest side of Chicago, Illinois, August 25, 2010. Children hear stories, sing songs, play and eat during a typical three-hour school day. (Nancy Stone/Chicago Tribune/MCT)

Bilingual education is back in California thanks to the approval of Proposition 58, and in an effort to bring awareness, the Linguistics Student Organization at CSUN offered an informational session to debunk common related myths.

Dr. Janet Oh, interim director for CSUN’s Office of Institutional Research, was the guest speaker at Monday’s event, coordinated by Sarah Phillips, a graduate student and councilmember of the organization’s leadership council.

“We hope to increase the attendees’ understanding of themselves and their community with respect to how language and the mind interact,” Phillips said.

Oh, whose research has focused on language development, loss and maintenance, discussed the importance of maintaining a “heritage language”, the language learned at home as a child different than the dominant one used in their society.

“Bilingualism is a cognitive and academic advantage as kids that are bilingual tend to be better at selective attention”, Oh said. “Bilingual adults have less amount of dementia, since they’re exercising their brain more protecting it from certain things.”

So what are some of these myths? Here are five that were discussed:

1. Will children be confused if s/he learns more than one language?

Children can differentiate languages even before they start speaking according to a 1989 study by Genesee. Mixing language is not itself evidence of confusion Oh says, but instead, it can be used when filling in a gap where a word doesn’t translate exactly.

An original theory by Ronjat in 1913 believed that parents must only speak one language to kids but she says there is no systematic empirical support for this theory.

2. Will kids who don’t learn English first fall behind in school?

This Oh says, is a common concern amongst immigrant parents.

“In actuality research shows that bilingual kids have better grades and have lower drop-out rates according to a 1995 study by Bankston & Zhou. If kids can maintain their bilingualism it can be a protective factor.”

Natalie Rubio, a theatre major, said that growing up speaking English and Spanish made worried about her diction, but she still believes that bilingual education is important.

Some of Rubio’s friends, she said, were bullied because of their accents at one point which she doesn’t understand.

“In California you don’t experience that because everyone has some sort of accent and that is accepted, but I can see how it would be harder in other places in the United States, which is crazy,” she said.

This was a common argument used during Prop 227 but it is not happening.

“The Heritage language is commonly lost during the first US born generation” Oh said, according to a 2000 Filmore study. “Children switch to English once they get to school and become monolingual. By adolescence children often prefer to speak English stopping them from becoming bilingual adults she says”

4. Isn’t English the language of success in the U.S.?

“English doesn’t have to come at the cost of another language. For some reason it is believed that if you learn English, you cannot learn another. Bilingualism is how you’re successful here. English is not the language of success. In California in order to navigate certain areas you have to know other languages,” Oh said. “If you continue to support a heritage language in school, their cognitive and linguistic skills are developed, and this helps their English proficiency.”

“As children grow older, parents are less and less likely to communicate effectively and their relationships suffer,” Oh said. “I realized that there were certain topics I couldn’t talk to my parents about for example my research because I don’t know the Korean words that translate.”

According to her research, quality of the relationships is best when the parent and child mutually speak in the Heritage language.

In the families in which they mutually speak in English the level is limited as the vocabulary is limited and the depth is not as good. Often times there is a mismatch, probably the worst in which the parent speaks in the heritage language and the child responds in English. This doesn’t work as well as there is a disconnect.