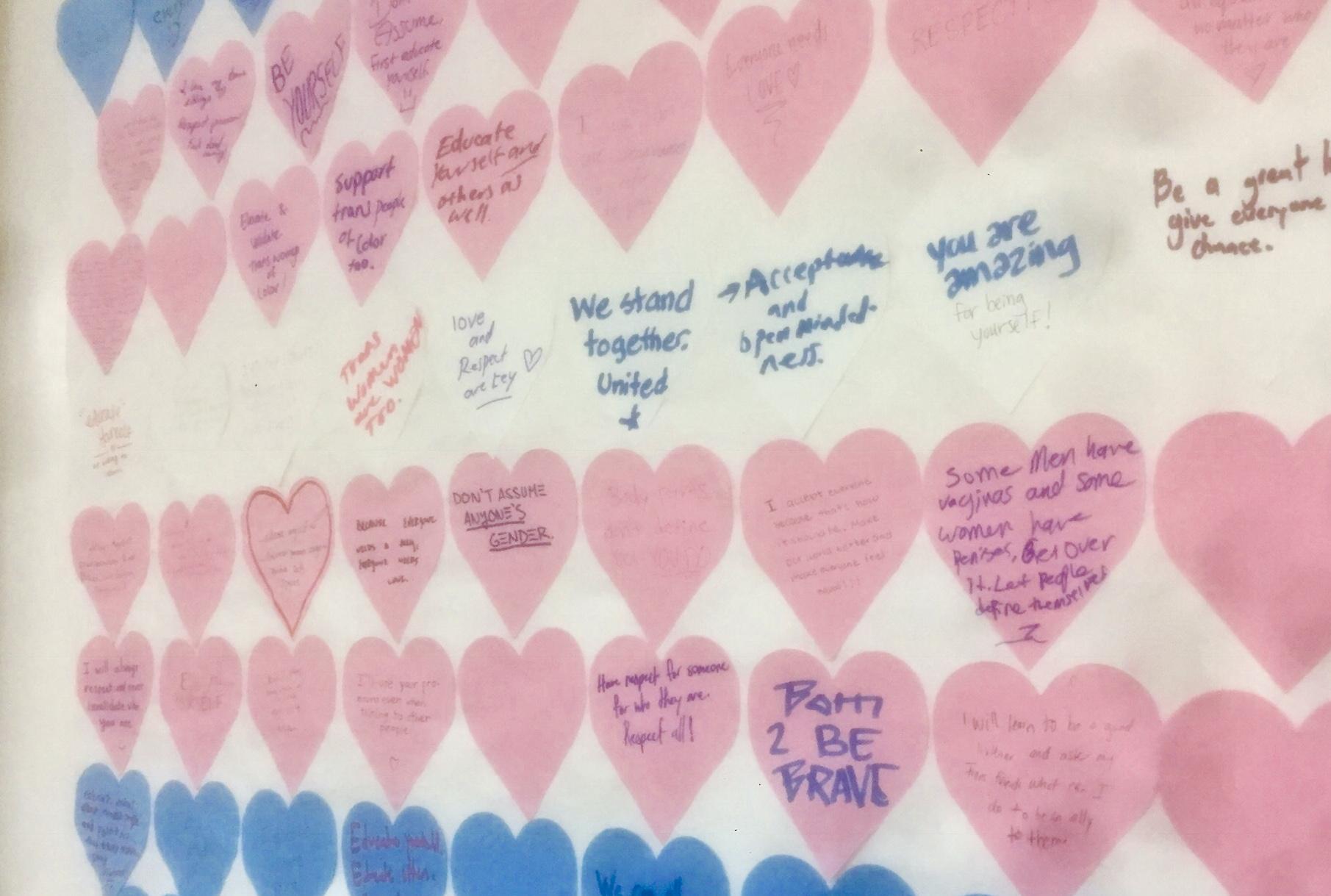 During Trans Week, there was a display of heart notes that included messages like, "You are amazing." Photo credit: Stacey Arevalo

Acceptance, love, diversity and pain unites the transgender community at CSUN but also gives them strength to speak up in defense of their rights.

During Trans Awarenes week, which is in its fifth year running at CSUN, the Pride Center featured movie screenings, lectures and workshops to educate students on their common issues. A “VarieT Show” and a candlelit vigil wrapped up the week in memorializing those who died by anti and transgender violence.

“Trans violence is real and it exists and it’s not just racist and transphobic, but there are so many levels that comes with being transgender,” said Grey Valdez, a creative writing major and master of ceremonies for the talent show.

The week’s key goal was to shed light on an important issue, said Tyler Neroes, a student administrative assistant at the Pride Center and coordinator for this year’s trans awareness week.

“We just need people to listen to us. We all want our allies to speak up, especially when we’re not there,” Neroes said.

The Pride Center believes educating the public on what transgender really means is also important and recognizing the community’s presence on campus.

“Trans isn’t only men turning into women or vice versa. It refers to people who don’t fit binary ideas of being men or women,” Valdez said. “We’re among them in their classrooms and serve them their Subway sandwiches, but it’s scary for us to know [our peers] don’t recognize us because that means they’re not fighting for our rights.”

A lack of support towards the trans community can often cause many trans people to get stuck in a “hard continuous cycle” of hardship, Neroes said.

“A lot of trans people are involved with sex work because we can’t get adequate jobs or even housing sometimes, so most trans women of color end up relying on sex work and because of that they often end up in prison,” Neroes said.

On campus the trans community is a small, close group and receives support from queer groups such as the CSUN LGBTQA club.

“When there’s an ally in a class, it goes a long way, especially when standing up for a person’s preferred name or pronouns,” Neroes said. “If someone sees that the professor is not acknowledging a person’s experience, because of their authority, then other students will feel like they can do the same,” Neroes said.

The term ‘they,’ which is what Valdez identifies with, has actually been recognized for singular use, as a gender-neutral pronoun. It won Word of the Year in 2015 by the American Dialect Society. Other common pronouns used within the community are she/her/hers, he/him/his, they/them/theirs and even ze/hir/hirs.

“The pronouns are not a big deal or super scary, they’re something that everyone uses in their daily lives,” Valdez said. “It’s very simple and it’s a big thing to try and normalize that around campus.”

The Office of Admissions and Records at CSUN offers a “Preferred ‘First Name’ Change Request” form for transgender students who identify with a different name. This request will display their preferred name on class and grade rosters and in the campus directory. All other documents, however, such as official transcripts and diplomas will still reflect the student’s legal name.

Valdez also suggests that allies “get woke,” to be aware and know what’s going on in the trans community and speak up on their behalf. Calling people out when they’re being transphobic or homophobic is important.

“[Bathrooms] are a space that you should be able to feel comfortable going to,” Baldado said.

Gender Inclusive Restrooms can also be found on campus in the Northridge Center, Oasis Wellness Center, Student Recreation Center and in Sierra Hall. To view the full list of the gender inclusive restrooms throughout campus, click here. To see the map of the restrooms within the Student Union click here.

“The T is not forgotten. Now we have more visibility thanks to people like Laverne Cox and Caitlyn Jenner,” Valdez said. “The trans community is not so scary and out there anymore. It’s spoken for now and we have people like Buck Angel who have been fighting for us for years.”