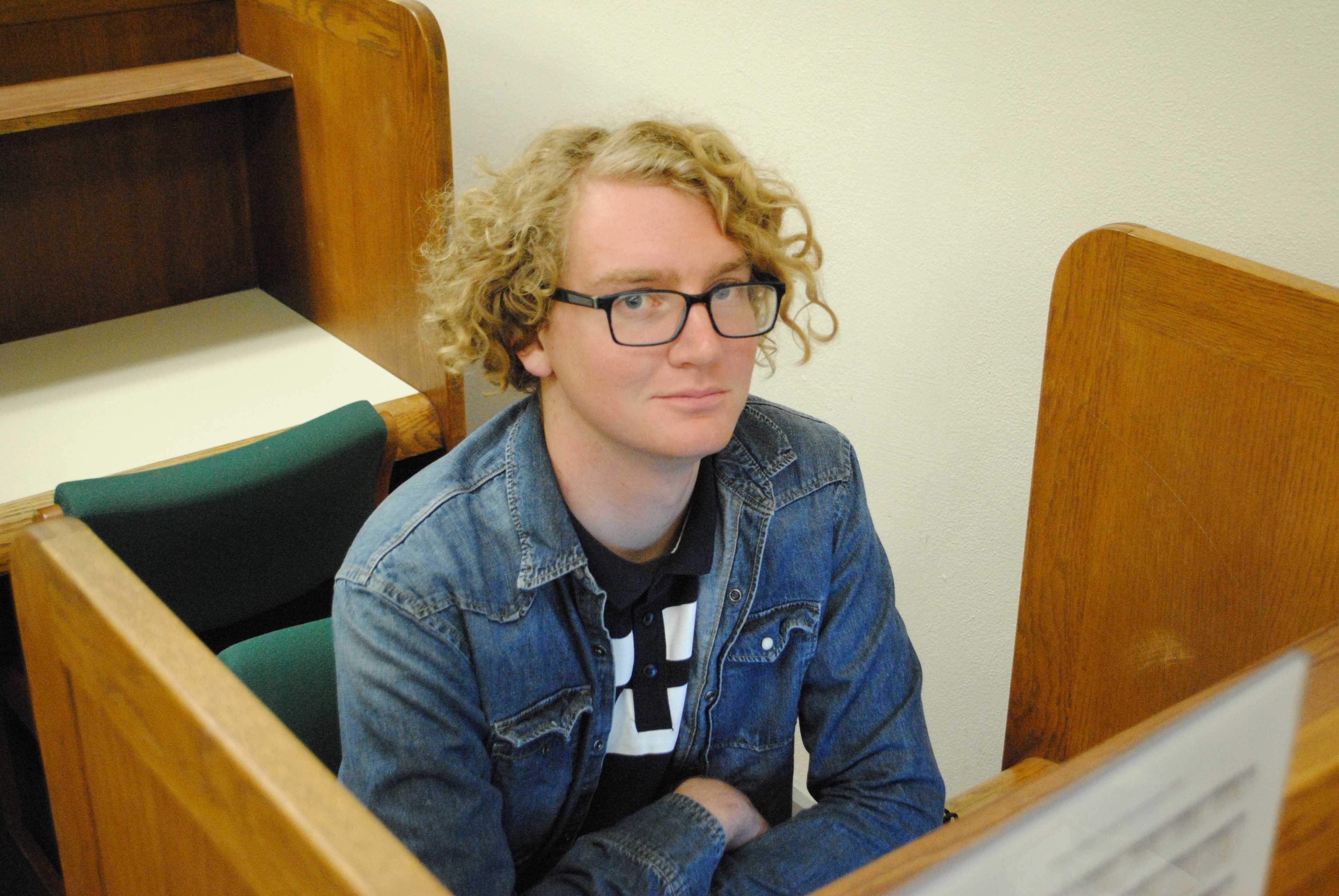 Thomas Zabilski, 21, aspiring comedian and theatre major at CSUN who says one of the best things about performing stand up is the "high you get on stage" and getting to "truly be yourself." Zabilski has been busy with a Shakespearean production and has not had time to perform his improv or stand up sets. Photo credit: Vanessa Saenz

As cliché as it sounds, laughter can sometimes be the thing some people need after a stressful day of hard work.

Whether people pull out their phones and scroll through memes, listen to a comedian’s podcast special, watch a funny animal video on YouTube, or go to a comedy show, they are always looking for ways to unwind.

Cole Aviles, 24, is a theatre major who has been performing stand up for two years and does stand up to help people.

Aviles said he met a girl named Tess who had a sibling battling cancer weighing heavily on her shoulders and that he used comedy to make her smile.

When he goes back to his hometown of Sonoma Calif., Aviles said he performs at bars during open mic nights.

Students who are pursuing their interests in comedy had the opportunity to practice their sets on campus during the Open Mic Night – Comedy shows in the USU Games Room. However, there hasn’t been an open mic comedy night since April.

These students know they have other options to choose from like performing on stage at another performance event in the Games Room called Expressions or at comedy venues like The Comedy Store in Los Angeles or Flappers in Burbank, but they think having a place to go on campus could benefit their comedic careers.

“Having an open mic on campus is a great way to test material in a safe environment,” Aviles said. “It’s a good way to practice and get better and grow as a comic.”

Emanuel Maya, 22, a CTVA major who has been performing stand up since his senior year of high school, agreed with the idea of having an open mic on campus and even wants to start a comedy club for students and aspiring comedians to attend.

“An open mic on campus would be more consistent, which promises students an opportunity to go up…lottery-styled open mic’s are a gamble regarding whether or not you will even perform that night,” Maya said.

Theatre major Thomas Zabilski, 21, who has been performing improv for six years, said being a comedian is a busy and stressful life, but the people make it worth it because you meet every type of person there is.

Finding a room to test out their material is only one obstacle comedians must overcome, another is developing their comedic timing.

Zabilski said his biggest obstacle is that his material is usually too weird for most audiences.

Maya said the most challenging aspect about performing stand up is not knowing how the audience will react to your set and highlights an experience he had.

“I went on stage with so much confidence, not getting laughter from the audience was completely new to me. It was awkward and uncomfortable,” Maya said.

Aviles said people are drawn to comedy right now because of the current state of the world.

“People are going to comedy because the world is so crazy right now,” Aviles said. “People need a laugh more now than ever, tomorrow is filled with so much uncertainty and people are scared. Comedy helps deal with it.”