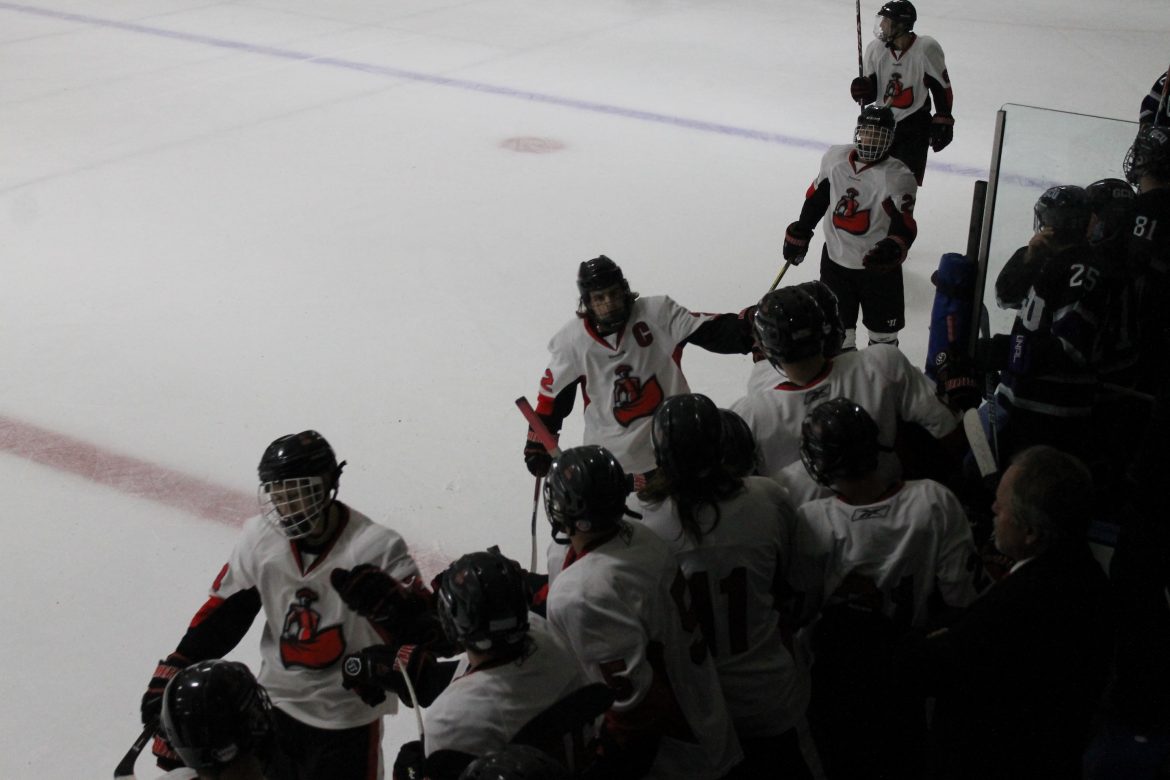 (12) Evan Wright, (22) Alex Reints, goal scorer, (25) Eli Berengut, and (6) John Michael Laurin receive praise from their team as this line got CSUN a 1-0 lead in the first against GCU Friday night at the Iceoplex in Simi Valley. (Solomon Ladvienka/The Sundial)

The No. 14 ranked CSUN hockey team got the job done as they swept the two-game series against No. 12 Wyoming University in Wyoming this past weekend.

In the first game Friday night, Eli Berengut got CSUN’s first goal, but the Matadors found themselves down 2-1 early as the team went into the first intermission.

Quentin Abaya scored a goal for CSUN early in the second period, making it 2-2. With assistance from Ellis Bourgoujian and Cameron Rorick, the Matadors would score three unanswered goals, making it 4-2.

“It was great to see the team take their game to another level after adjusting to Wyoming in the first period,” said Matadors’ play-by-play announcer, Travis Van Noty. “We came out hard in the second rolling all four lines and they couldn’t compete with our depth.”

The Cowboys traded goals with CSUN to shorten the margin, but CSUN would continue with the scoring. John Michael Laurin got the fifth goal for the Matadors and Evan Sharpshair would close the door as CSUN would go on and win, 6-4.

“It was a great team effort and a good win, particularly after the long day of travel,” head coach JP Gale said. “It took us one period of play to get our legs going but once we acclimated to the arena and their style of play, we took over and never looked back.”

The following night, the Matadors brought the physicality. Wyoming matched that as the two teams tussled, scuffled and plenty of penalties were accessed during the low scoring game. Goaltender Vincent Sepe, got the start for the Matadors in the net after a rough outing last time against North Arizona University.

Sepe responded by shutting out Wyoming, 3-0. The Matadors are the only team to have shut out Wyoming this season as the Cowboys average 5 goals a game.

“Vince [Sepe] shutting them out is a big testament to his ability because they certainly had their chances,” Gale said. “I think our depth in the net is among the best in the West Region.”

The hits flew left and right and both teams had good chances to score but nothing happened. Late in the first period, Matadors captain Alex Reints got CSUN on the board with a powerplay goal with 1.5 seconds remaining in the first.

John Blascoe gave the Matadors a 2-0 lead, following being set up for a one-timer in the third. Blascoe and Sharpshair would assist Abaya with getting CSUN’s third goal and giving the Matadors the 3-0 win.

“This weekend was a good road trip,” Blascoe said. “Wyoming was ranked higher than us, and to go into their rink and come out with two wins is really good for us, especially when it comes to rankings. Moving forward, I would love to see this success continue. We’ve got great depth on this team, and these groups of men are starting to click well, especially at this point in the year.”

CSUN currently stands at 16-2-0-1 on the season, which is the best record the Matadors have had going into the Thanksgiving break before jumping into this division.

The Matadors will be off this Thanksgiving weekend and will resume play Friday, Dec. 2 at the IceOPlex in Simi Valley as they face off against Long Beach State.