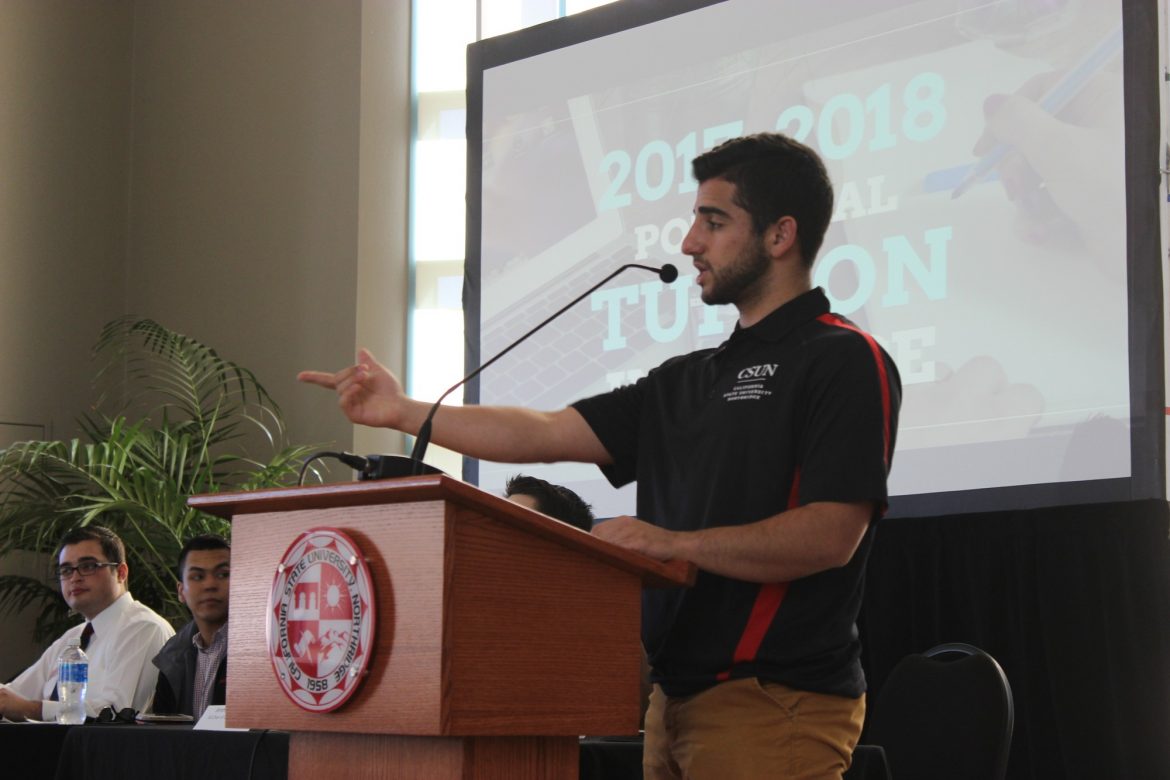 A town hall meeting from Associated Students (AS) regarding the possibility of a tuition increase of $270 annually, drew a small number of students Tuesday afternoon.

The campus’ Grand Salon had approximately 20 attendees for the meeting, some of whom were members of AS sitting in the crowd.

“Obviously you want the whole room to be filled,” said President of AS Sevag Alexanian. “This is a really important issue that’s going to be affecting all of us students, not just the 15-20 that showed up today.”

A panel of AS members and students from other campus organizations provided an overview about a tuition increase that could span the entire CSU system.

Students from the 23 campuses are facing the option of an increase as the CSU system is trying to receive an extra $169 million from the state to cover expenditures totaling $346 million, according to a preliminary budget for the 2017-2018 year. The rest of the expenditures are covered from the general fund consisting of money from the state and tuition revenue.

Gov. Jerry Brown will decide on a revised budget in January that could include the extra funding. The CSU Board of Trustees will determine whether a tuition increase is needed in March if the funding is denied, according to Jorge Reyes, a CSU student trustee.

“There’s a lot of frustration. I’m frustrated. I’m in a position where I see the damage that this creates for many students,” Reyes said. “I hear the stories. I understand them. Back in 2010 we had this proposal of an increase as well. I was paying out of pocket. I didn’t have financial aid at that moment, so I understand the concerns that many students have.”

The increase proposal comes at a time when the CSU system was tasked with providing fair wages for faculty. Gov. Brown urged the CSU system to graduate students on time for what has become known as Grad Initiative 2025, and the end of proposition 30, according to Reyes.

Proposition 30, which was passed in 2012, increased income taxes for high income earners and increased sales taxes, which helped cover tuition spikes by funding public education for a few years.

Now with that guarantee expiring, students are faced with the possibility of paying more for their education, according to the panel.

A few of the costs that are adding to the budget are, infrastructure needs across CSU campuses, CSU’s 1 percent enrollment growth and its $40 million price tag, along with the $75 million needed to fund the grad initiative for the upcoming year, according to Reyes.

Financial aid is expected to cover students who are qualified to receive it, but they also risk losing that extra financial aid money.

Students and parents who pay tuition out of pocket will see the increase as an extra cost.

“Even a $200 increase—it may not seem like that much in scale, but however, for people who are living on their own, people who are struggling, this is a big deal,” said Jenny McNabb, an 18-year-old music industry studies major. “This is basically the cost of textbooks.”

The $270 proposed annual increase is what undergraduate-resident students would pay, according Reyes.

Grad students end up paying an extra $438 a year and international and out-of-state students $264 per unit if the tuition is increased.

Nursing, doctoral programs and credential programs would also have their own added costs, Reyes said.

The CSU Board of Trustees could also vote on looking through each CSU campus and finding programs that could be cut to cover costs, said Jeremy Mauritzen, AS chair of legislative affairs.

“We don’t want to take away any program from the CSUs,” said Mauritzen about discussing the option with CSU representatives. “We don’t know [how cutting] that program can affect different students at different CSUs.”

Within the last ten years, CSU students’ tuition went from covering only 20 percent of the budget and state appropriation picking up the other 80 percent, to now covering the budget equally, according to numbers provided by the CSU Chancellor’s Office.

AS plans on holding a phone banking session on Nov. 28th to contact the governor’s office and legislatures to convince them to provide the extra funding, said Alexanian.

AS is also collecting student stories that will be shared with the state legislature used to undercut the possibility of a tuition increase.

“The hope is that we start coming up with a consistent funding structure for the CSU system that does [not have us] on the edge of our seats thinking whether tuition is going to be going up, whether we’re going to be receiving our full funding,” Alexanian said. “We need to have the state invest more consistently and more steadily into our system.”