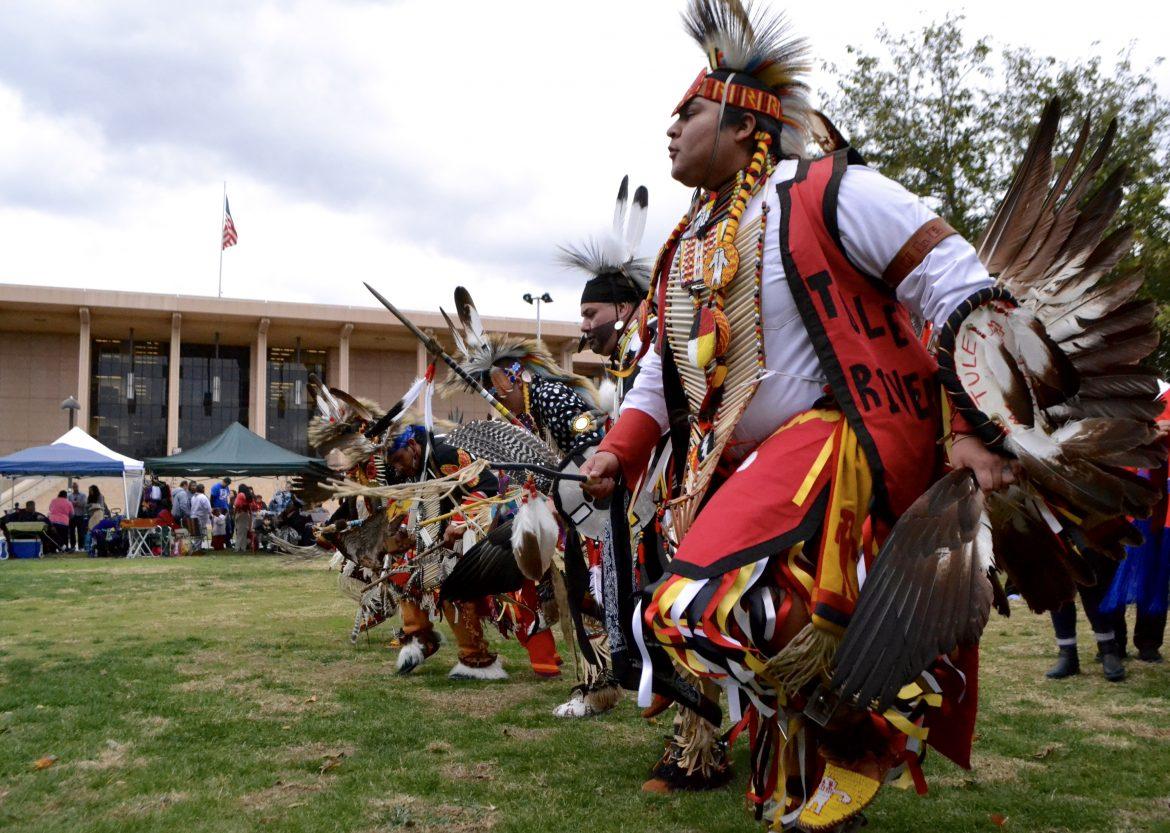 Tents formed a large circle on the Sierra Quad with a celebration booming at its core honoring the American Indian culture at CSUN as part of the Indigenous Awareness Month on Saturday.

The crowd composed of CSUN students and Native people from different parts of Southern California did not mind the rain storm that hit halfway through the 33rd Annual CSUN Powwow. After all, the celebration’s theme was “Water is Life.”

“Powwow’s are inner tribal traditions, something that comes out of the reservation period in the United States when tribes joined together to celebrate their different cultures, ceremonies, and songs,” Burkhart said.

Thanks to the collaboration by AISA, the American Indian studies program and Associated Students, attendees were able to enjoy American Indian dance, music, foods and shop for Indigenous traditional clothing.

“Bringing awareness and wanting to protect our lands is something that brings us all together. Our club contacts members of the community, be it drummers, dancers etc. and we ask them to volunteer and we all do it for free,” Burkhart said.

Different tribes such as the Navajo, Lakota, Chumash and Cherokee participated and presented giveaways for the children as well. Burkhart said this is done because respect and reciprocity is an essential aspect of the Native culture that is highlighted in the Powwow.

“You never do anything without offering something back,” Burkhart said. “It is important for Native people to treat each other with respect, honoring their elders and children, an entire cycle of taking care of each other throughout all of the generations.”

The Powwows have become ways of bringing people together in general, which is important now to highlight issues affecting the community such as the construction of an oil pipeline in North Dakota.

“There are 10,000 people from all over the world at the Standing Rock reservation is a representation of our sovereignty and resistance and continued fight for our lands and our ability to survive,” Burkhart said.

Senior Council Member Xavier Fierro said that people should give as much support as they can to the protesters.

“‘Mni Wiconi’” has been the battle cry of the thousands of protesters supporting the Standing Rock Reservation; it means water is life,” Fierro said. “However, we have canopies to protect us from the water, there’s nothing standing in between them and the water hoses and other weapons being used against them. “

Awareness of this issue, he said, should go beyond a Facebook feed and motivate people to stand up for their struggle.

Jessica Rivas, an anthropology major, decided to volunteer for the event because it’s important to support other cultures, especially the Native culture in the United States.

“I can’t drive to the Dakotas, but I can come and support this local event that is supporting that resistance,” Rivas said.

Students should support the community in their effort to protect their basic human rights, she said, since the government is not adhering to that.

“It’s something you think only happened in history books but it’s happening right now to modern day people,” Rivas said.

Gerardo Gutierrez, an environmental occupation and health major with a minor in American Indian studies, is one of the members of AISA who also hopes CSUN students unify with the community.

“Native Americans are marginalized and a lot of people don’t know they exist,” Gutierrez, who is part of the Chichimeca tribe, said. “Join, observe and understand that it’s not just about Pilgrims and Indians but get to know our cultures.”