20 years after a 36 year civil war in Guatemala 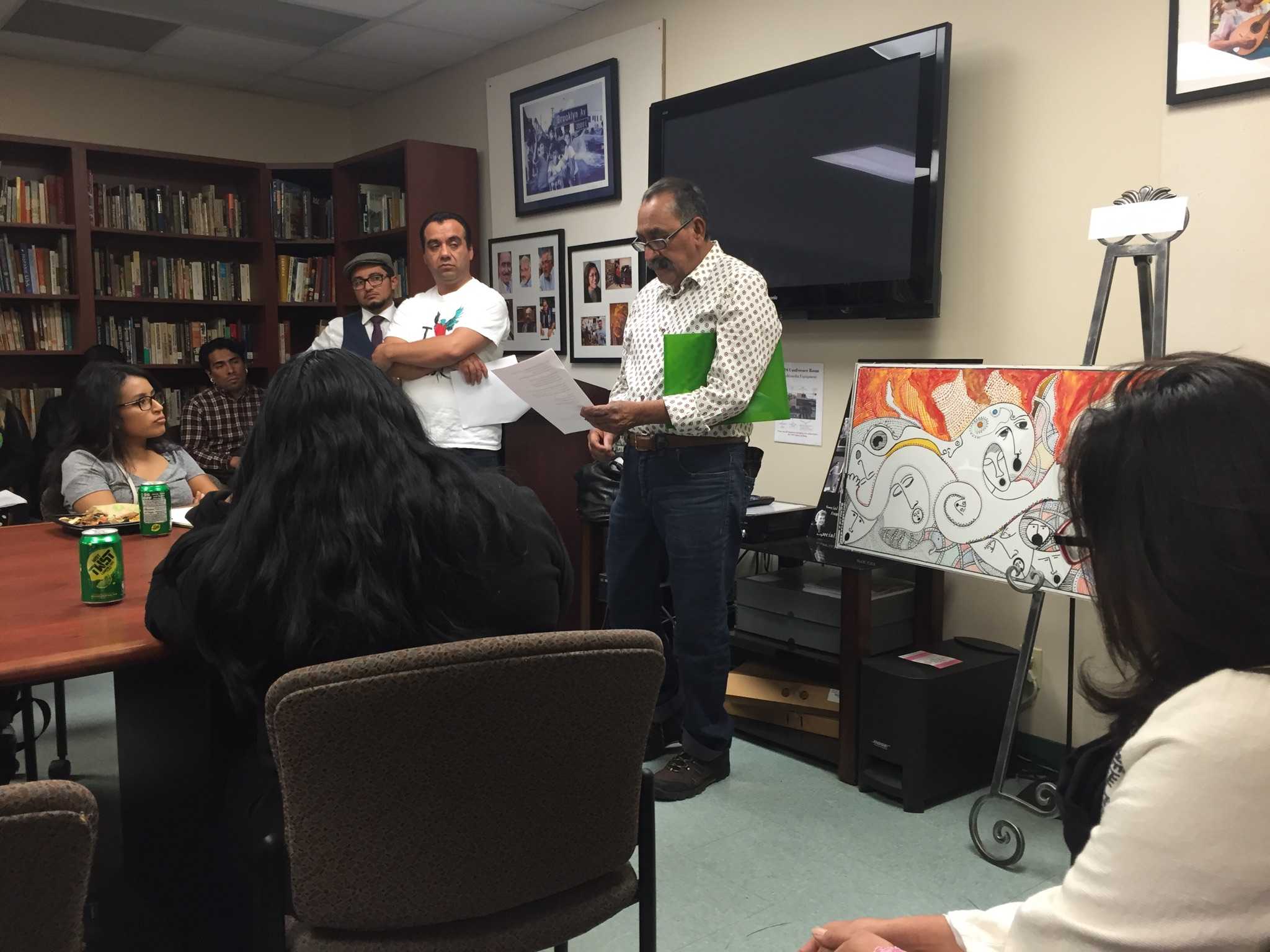 Poet and artist Mario Avila speaks about his painting on the right on his experience of living through the Guatemalan Civil War Photo credit: Han Byol Yi

Chicana/o studies professor Alicia Estrada, with the help of various community members, organized about 20 artists, poets, and musicians to express what the tragedies of the Guatemalan civil war meant to them.

Students who attended the event became part of the art exhibit on display in the hallway in front of the Chicana/o studies office, by writing on a tag what peace meant to most to them and hanging them in a display case.

Erendira Dominguez, a 23-year-old Chicana/o studies major, said she loved the artwork displayed in the hallway. She pointed to a photograph of people commemorating the Rio Negro massacre taken by James Rodriguez.

“I can relate to this one where they are mourning the death of family with candles,” Dominguez said.

The artwork was curated by Fabrizio Flores who works with The Getty, MOCA, and various institutions to create curriculums for art students.

One of the first speakers was painter and poet Mario Avila. He told a story of being tortured and witnessing his friend’s murder, then fleeing Guatemala. He also told a story of witnessing bombs dropped on Guatemala City by the United States when he was 12 years old.

Playwright Emanuel Lorca asked students to join him in reading a play following the journey of a man who fled Guatemala at the time of war and then returned with his son, who doesn’t even speak Spanish after the peace accord was signed.

For Loarca, the United States’ thirst for conquest never ended when they reached the west coast beaches.

“United States calls it intervening, but over there, they [Guatemala] simply call it invading,” Lorca said.

John Alvarez, 22, computer science major, said he connected with a piece showing a soldier turning into a flock of birds.

“I think that it’s [artwork] saying is freedom from the shackles of war,” Alvarez said.

Many of the artworks featured the national Guatemalan bird, Quetzal. Loarco said the bird will die in captivity and it is a symbol of freedom for Guatemalans.

Transwoman actor Mariana Marroquín came to speak about her experience living in Guatemala right after the signing of the peace accord. She remembers hate crimes by her own people that made her leave her country but was also overjoyed to tears by the love in the room.

“Being with my people and feeling safe is such a wonderful feeling,” Marroquin said.