Group of Matadors Invite You to Rise With Them Friday Mornings 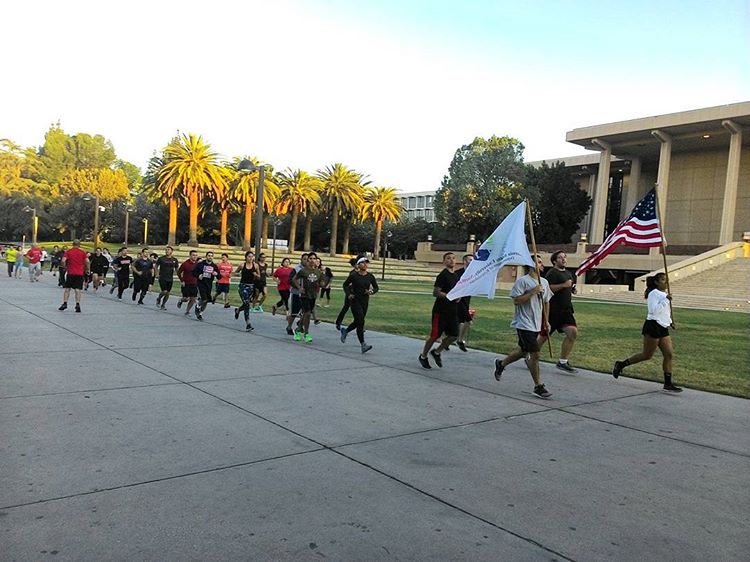 As this semester comes to an end, a free student-led exercise group on campus invites you to break your routine and release some stress.

Friday Morning Matadors (FMM) is part the kinesiology department and is open to all students, alumni, faculty and staff from all fitness levels. The group meets every Friday morning at 6:30 a.m. in front of the Oviatt Library.

“Just try it, make it a bucket list thing for you before you graduate and experience getting your body moving and getting in sync with your mind,” Erica Borja, FMM’s program director said, who is also a kinesiology major with an applied fitness option.

FMM started in February of this year at CSUN as part of 3wins Fitness. The project, originally called “100 citizens,” was started by kinesiology students at as a free community program in parks in South California. It was also honored by Michelle Obama’s “Let’s Move” campaign for its community service and has now expanded to other CSU campuses.

FMM, however, is exclusive to CSUN and has a unique structure, Borja said. It is based on sessions that use a person’s individual weight with offered variations of the same workouts, modified to fit a person’s fitness level. Scavenger hunts, relay races, and other approaches are used to develop the upper body, lower body, and core.

Lucia Muro, a kinesiology and exercise science major who will be the next program director, said the activities incorporated create a fun environment.

Kevin Murphy, a marketing major with a business law minor, has been a member for two semesters and said FMM has not only helped him build unique connections but also improved his self-esteem.

“I’ve always dealt with being overweight and this program has helped with my understanding of accepting myself,” Murphy said.

Murphy, who said to have struggled with depression and anxiety when he first arrived at CSUN, now recommends joining to those who want to be part of a community and lose weight.

“FMM gave me something to do that made me feel like I was part of CSUN,” Murphy said. “And it’s almost like having a free personal trainer every Friday.”

The early morning workouts are led by a group of 12 experienced student instructors who have gone through the 3wins Fitness program. They’re trained to check people’s forms and make sure you’re doing the workouts properly Borja said.

To join, students should show up 15 minutes before the session to check in and bring a signed copy of their liability and photo release forms that is valid for one year.

“Yes it is early but if you’re not feeling motivated or think working out by yourself is not fun, join FMM and get it out of the way early,” Borja said. “We’re balls of energy who not just promote wellness but are just as crazy for getting up early every time.”