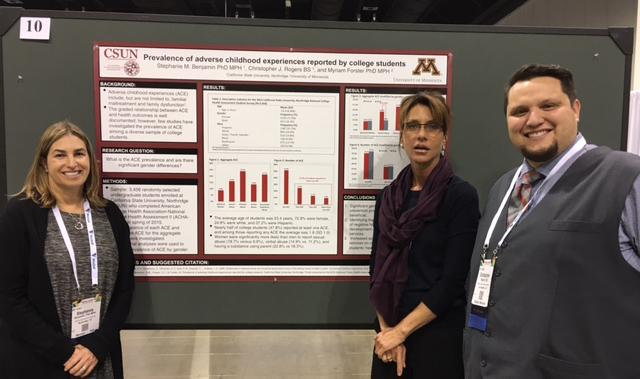 The study identified students who have suffered from dysfunctional families and how it impacts their everyday lives.

Rogers, alongside CSUN faculty member, Stephanie Benjamin, and Myriam Forster from the University of Minnesota, obtained a poster and oral presentation that was accepted by the National College Health Assessment.

Rogers, the presenter of the poster, said it was essential for them to grasp the prevalence of the adverse childhood experiences (ACE) on a college campus because usually studies are focused on a younger, broader population.

“We wanted to identify [students] when they’re in a college level or college population because adults have their own set of issues and challenges,” Rogers said. “I wanted to make sure there were any potential interests here.”

“The first thing that was very unique to our study was that approximately 47.8 percent of the students reported at least one adverse childhood experience,” Rogers said. “That is nearly half the campus.”

He said they only used six different measures to identify the causes of students’ behavior and health. According to Rogers, they didn’t include divorce in the study because it’s something that is common.

“We would’ve already hit that 50 percent mark because divorce is the most prevalent experience,” Rogers said. “The measures we used that were ACE related were if they had battered mothers, whether they were sexually and verbally abused or have had household substance abuse.”

“It was really interesting to see that there were stark differences in genders on campus,” Rogers said.

According to their study, people who had two outcomes of a high BMI, suicidal thoughts, binge drinking, etc. 59 percent of them were ACE exposed. On the other hand, people who had three outcomes, 68 percent were exposed.

“The more risk groups you had, the more likely you were exposed and have had these experiences growing up as a child,” Rogers said.

Students in the psychology department also believe childhood experiences and what people were exposed to play major roles.

“In my opinion, your experiences are definitely a reason for who you are,” psychology major Alina Bunarjyan said. “Not just for women, but men too.”

Psychology major Samantha Rabins was not at all surprised that according to the study, women were more susceptible to being ACE exposed.

“I think it can have some sort of an impact,” Rabins said. “It can either push them to succeed more or maybe it can do the opposite where they’re not as motivated or focused.”

In hopes to spread more awareness and provide more information about adverse childhood experiences, Rogers said the goal would be to implement an ACE screening tool on campus to identify students and direct them to appropriate services.

Their purpose is to also educate students on the mental health services, stress reduction services, and exercise resources that the campus offers to help change the setting of students’ lives.

“Once I really dived into this research, I realized that this is important work,” Rogers said. “These adverse childhood experiences have a long, lasting time effect. It’s not just an older population, but a younger population.”