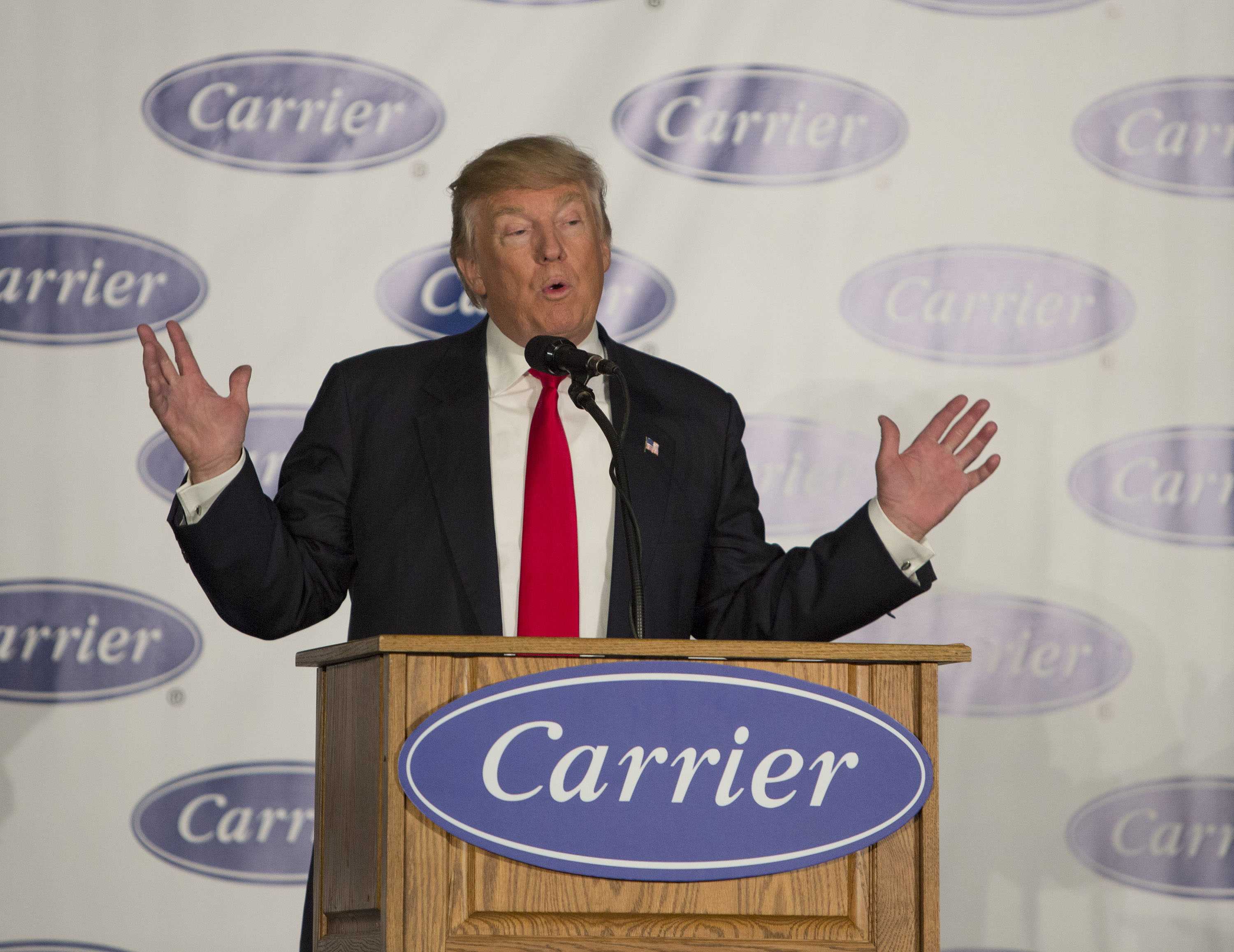 President-elect Donald Trump toured the Indiana Carrier factory. Trump announced a deal struck with Carrier executives to keep nearly 1,000 jobs in the U.S. in his first public appearance since his election on December 1, 2016 in Indianapolis, Indiana. (Lora Olive/Zuma Press/TNS)

While Americans remain in this honeymoon period with the remaining month under the tired eyes of Barack Obama, the new era of truth can already be observed.

Whether it is “Hamilton,” flag burning or Saturday Night Live, the frustration of an old man soon to be inhabiting the White House is already noted by the media.

This behavior has been expected for its anti-normality view. This anger, fueled by the internet trolls who support the Donald Trump administration, is developing a new status quo in the government. Journalist Wesley Lowery describes the years under Trump as the post-truth era.

While many of the newer liberal intellectuals will grasp onto this as their argument against some of the xenophobia to come from the Trump camp in the last year and a half, this era should be viewed not as a quasi-dictatorial framework, which to some level it already is.

Americans will have to look at this as life continuing through a new stage. After all, Trump’s hiring of Stephen Bannon, former executive chair of the alt-right news site Breitbart, will continue the harmful rhetoric Trump spouted from June 2015 until Election Day.

Bannon himself has equated his position to that of former vice president Dick Cheney, who is believed to have been a careful orchestrator of some of the horrors to emerge from the administration of George W. Bush. Bannon also equated himself to Darth Vader, the “Star Wars” villain who helped rule an entire galaxy and oversaw the destruction of a peaceful albeit rebellious planet.

Lastly, he compared himself to Satan, who needs no introduction.

Bannon is probably mocking himself, however this should not be considered docile humor from a humble man. Look at Bannon’s work, look at Breitbart. He is someone to watch for in the next four years, as his filth will have disastrous consequences if it permeates into policy.

If the left, which accepted the wrong candidate as their choice for president, can remodel itself and apply actual principles of liberalism to combat this growth of the alt-right and nationalism, then it will see another electoral victory in the years to come.

But this means a reboot. The “excitement” over Joe Biden running for president in 2020 is a pathetic step back. There needs to be younger candidates that embody the liberalism and humanism that got America started, it cannot be the same corporate, dynastic passing of the torch that the country has seen with the Democrats in the last twenty years.

In strengthening itself, the left can then fight off the alt-right trolls like Breitbart’s tech editor, Milo Yiannopolous, who calls himself professional provocateur, and the fact-bending of Trump. Bold criticism is needed when Trump confusingly condemns the cast of “Hamilton,” then flag-burning. Depending on the organization, burning Old Glory is the ceremonious honor of retiring a worn and torn flag. If Trump cannot find the respect in that, it continues to say quite a lot about how Trump views the world.

Talking with the Taiwanese president while angering China is okay in Trump’s world. For him, tweeting his disgust at satire pointed towards him is what any normal person would do without a thick skin. All things considered, the new normal is already here.

The post-truth era is fast approaching. Political opponents of the alt-right and nationalism need to intensify their arguments and fight fact-bending with fact. Continue to criticize the alt-right for its gross presence, although they will declare your facts as false, do not shrink back in upset.

Stay firm and do not be afraid to offend and criticize. Expect denouncement and laughable social media trolling. The threat faced is when political opponents face silence. All Americans are defended by the First Amendment, but anything can change now.

Welcome to Trumplandia, where up is down, blue is green, wrong is right. Truth is provided by nature, but is now based on how people perceive it.