Breaking the stigma of body modification 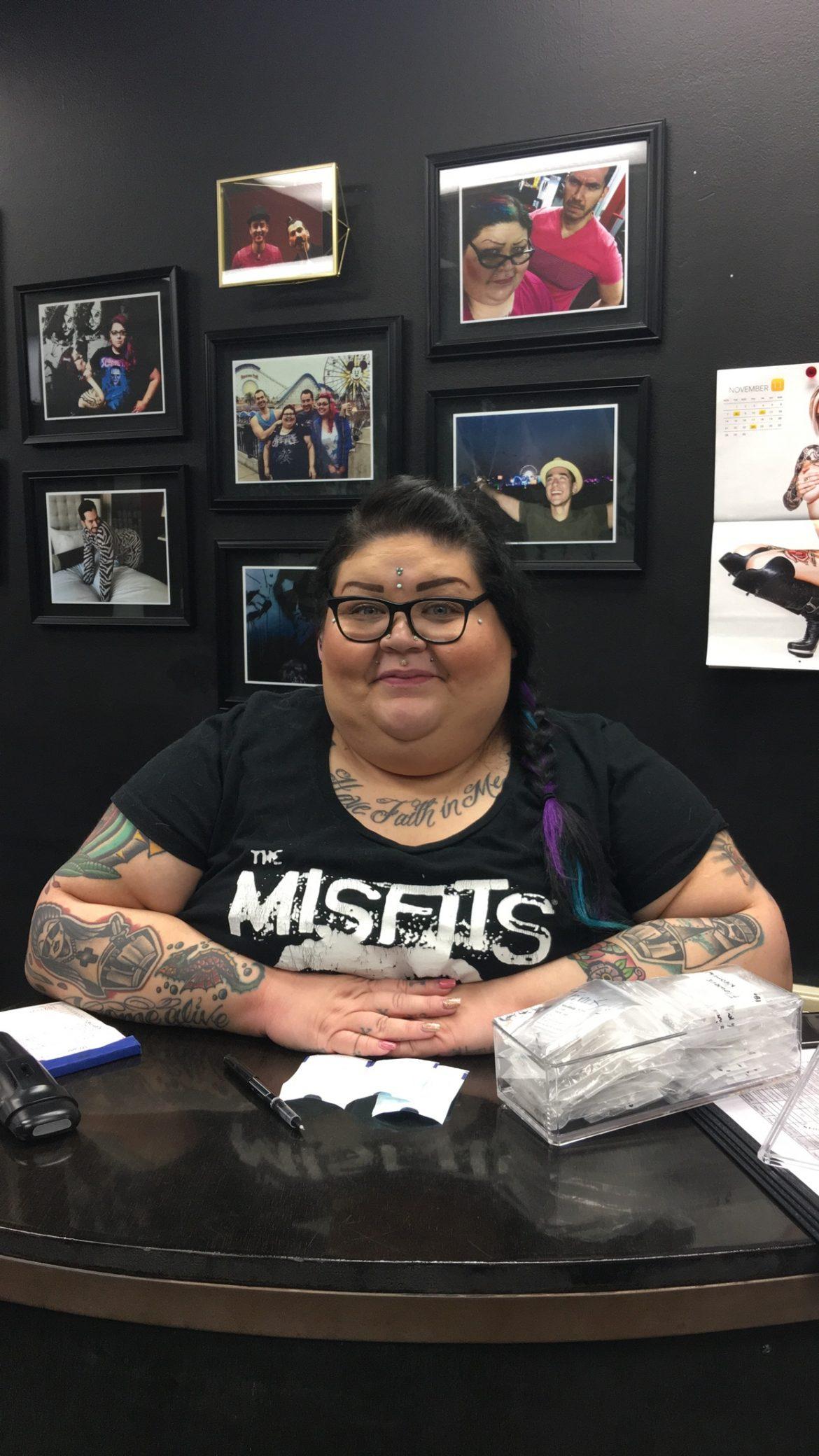 Tattoos cover much of her arms, and she has nine piercings on her face alone. She is known by her clients only as “Boge,” a nickname that stuck with 30-year-old Andrea Gonzales since childhood. Gonzales’ fascination with body modification developed during her youth, much to the dislike of her mother.

Nestled along Alhambra’s Main Street is JuL.Head, a small piercing shop where a stout woman with shades of blue and purple running through her black hair modifies clients’ bodies to their wishes.

Raised in a traditional and conservative Mexican household, Gonzales did not have much exposure to piercings or tattoos since her family looked down upon those who had such work done to their bodies. Her only experiences were seeing people with modifications walking in public, usually with her mother around.

During these times, Gonzales would admire the appearances of strangers who stood out from everyone else. She would tell her mom how cool she thought they were, to which her mother would comment that they looked like something they’d see on Halloween.

Gonzales recalled that she was amazed whenever she saw someone adorned with metal or covered in ink because they carried artwork with them wherever they went. Her observance was impressionable, as she eventually joined their ranks. She wondered how people could be comfortable looking different from everyone else in the world.

“I guess just how brave someone must be to literally not care what anyone else’s opinion is and just walk around with their head held high, and be able to just have fun with it,” Gonzales said. “I just thought it was amazing.”

Gonzales was the first in her family to become a walking art piece. Her new look caused some problems initially, since Gonzales’ family criticized the aesthetic for being different than society’s expectation. Most of the complaints from Gonzales’ family were directed towards her mother. Specifically, Gonzales remembers her mother being asked how she was letting her child be seen in public after taking on a more alternative style.

Judgment did not stop Gonzales from pursuing the appearance she appreciated since childhood. With a variety of piercings on her face and ears, along with multiple tattoos on her arms and one across her chest, Gonzales stood in the shop wearing a shirt with “Misfits” printed on it, in tribute to the 1970s horror punk band.

As the misfit of her family and part of a fringe group in the larger population, Gonzales has come to tolerate people asking her why she decided to pierce and tattoo her body. However, Gonzales said some people feel intimidated by her appearance, even some of her clients. More often than not, Gonzales is the one to initiate conversations with other people, which she attributes to people stereotyping her.

“I think a lot of people have this stigma about us [with modifications] being really tough and hard and rough around the edges and stuff,” Gonzales said. “Personally I love breaking the stigma because I could go on and talk forever, I’ll laugh with anyone, I’ll tell a joke to anyone, so I think it kind of throws people off how friendly I am because they expect me to be super standoffish.”

Gonzales’s friend and coworker Kathleen “Kat” Barrios was one of the people intimidated by the piercer’s look, even though Barrios herself has both piercings and tattoos.

The two first interacted when Barrios came in for a piercing at the shop, which Gonzales did. Leaning on the more reserved side, Barrios hardly talked to Gonzales. That is until Barrios was hired. Despite a rocky work environment with Gonzales, Barrios said their friendship was sudden.

“It was like a flip of a switch,” Barrios said. “She [Gonzales] has a hard outer shell, but it doesn’t take much to crack it, and she’s all laughs.”

In her sessions with clients, Gonzales talks about a range of topics, from cats to fashion and whatever else it takes to ease the nerves surrounding a piercing. Gonzales’ ability to make people comfortable has led to many deeper chats, but nothing is ever considered over-sharing according to her.

“I never thought that in doing body modifications I would somehow end up with a degree in psychology,” Gonzales joked. “That was not something I expected, but it’s a welcomed surprise. I love getting to know people.”

For client Racheal Delgado, a 34-year-old who went to the shop to have her nipple jewelry switched out, she only sees the positive, personable Gonzales that Jul.Head is known for. Delgado previously visited the shop for the piercing she was having switched out, which was a bit of a journey for her. Although this piercing was the third in her life, Delgado faced medical setbacks that complicated the healing of the initial jewelry insertion.

“Going through different piercers throughout my lifetime has been unique in its own way but coming to Jul.Head … it’s so humbling and honoring to find these two, Boge and Kat, who not only love their profession but they take it to a whole new level,” Delgado said. “They really do care, and that’s the best thing.”

Delgado’s attentiveness to the way both Gonzales and Barrios keep the shop’s environment is one of Gonzales’ main goals as a piercer. Having a warm, inviting shop is what keeps people come back for additional piercings and gives clients the confidence they need to go through with a piercing in the first place. For Gonzales, the modified lifestyle is one that is receiving more acceptance in mainstream society, but can improve further.

“For me, if I had to hide myself all of the time, I would go crazy,” Gonzales said. “I feel like this who I am, this is what I want to be, this is part of my story.”