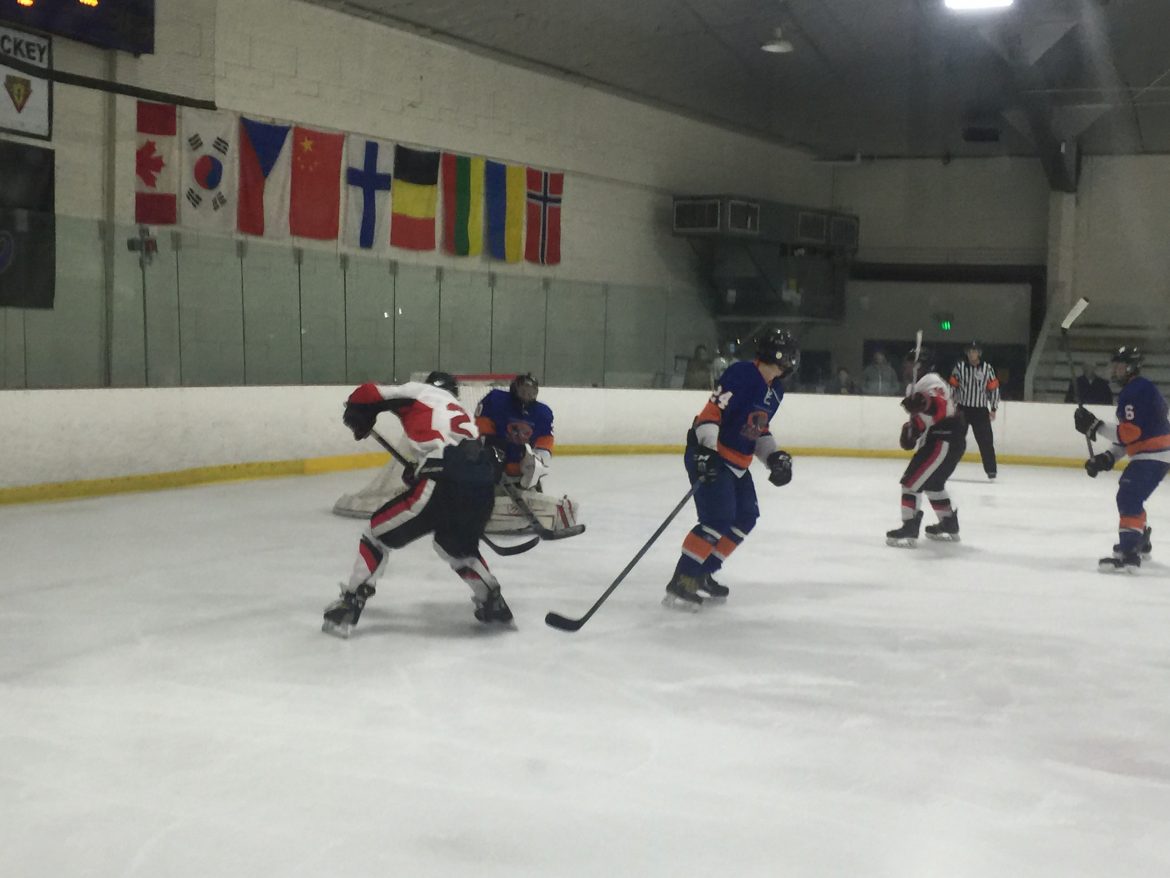 (25) Drew LaGaly gets a shot in on the Titans' Goaltender as (15) Quentin Abaya looks for a rebound Sunday night at the Pickwick Ice Center in Burbank. Photo credit: Solomon Ladvienka

Following a dominant performance in Wyoming before Thanksgiving break, the newly ranked No. 9 CSUN Ice Hockey team, is back to their winning ways after they defeated Long Beach State and Cal State Fullerton over the weekend.

The Matadors were back on the ice last Friday night looking to up-end Long Beach State after the 49ers handed CSUN their first loss of the season in early November, losing a tight, physical game, 1-0.

“We have to keep the momentum going,” said Alex Reints recalling the success of the team. “We have to practice the way we’re going to play in the game, especially with these upcoming games we have for the rankings. We can’t afford to lose them.”

Levi Bolls and Alex Reints scored CSUN the first two goals of the game, but Long Beach tied it up before intermission. CSUN’s Ellis Bourgoujian scored the Matadors’ third goal, but after the 49ers committed a four minute powerplay, CSUN couldn’t add another. Instead, Long Beach State saw an opportunity and tied the game at three before the end of the second.

“The physicality is the biggest part of this team and we need to stay physical if we are going to get these wins,” Bolls said. “We’re ready to push forward and keep the streak going.”

As the game was still tied at three, the Matadors stepped up and scored the game-winning goal. Maxwell Goen, who is known for his physicality, not only scored the game winner, but put the nail in the coffin by scoring two goals in the final four minutes. CSUN defeated Long Beach State, 5-3.

“Two great passes from my centermen, which set me up, and I was able to bury them,” Goen said. “These were my first two goals of the season and I felt that it came at the right time, especially right at the end of the semester to get the momentum going forward into the second half of the season.”

The second round of the L.A. Kings College Cup took place Sunday, as the defending champions faced off with rival Cal State Fullerton. The Titans weren’t an easy task for CSUN, as the Titans skated around and threw checks in the opening minutes.

“We have to go to the Championship round,” Reints said. “We have to keep that Kings’ Division going, and go 2-for-2.”

Eli Berengut scored the first goal for CSUN, but was waved off due to a Matador being in the goalie crease at time of goal, therefore it did not count. The Matadors headed into the locker room tied with Fullerton at zero.

“We were pretty slow and unfocused to start off the game,” Berengut said. “The coaches gave us a pep talk, and got us going, and we would come out strong following the first intermission.”

The Matadors took an early 1-0 lead, but the Titans would not go away. They tied up the game shortly after. The final spot in the L.A. Kings College Cup Championship game was on the line for both of the teams. The Matadors responded with scoring four unanswered goals from Drew LaGaly, Jacob Steinfeld, Eli Berengut, and John Michael Laurin to go up 5-1.

“It always feels good to be out there playing hockey with the boys,” LaGaly said. “I felt that I was in the right place in the right time and just working hard all together.”

CSUN has been known for their physicality all year, and they delivered nothing short of that. Hits after hits were thrown against the Titans and the Titans couldn’t stick around.

Berengut got his second of the night as CSUN went up 6-1. The Titans attacked back on two goals in the third, but it was no match as the Matadors are headed back to the L.A. Kings College Cup for the second consecutive season.

“Felt really good to get that goal in the second, I didn’t want it to get away from me and I really wanted it,” Laurin said. “This is my first time going to the Kings Cup, not something I expected, so it feels really good.”

The Championship game won’t officially be played until March of 2017. The Matadors will be at home at Simi Valley’s Iceoplex Saturday night against San Diego State. Puck drops at 7:30pm. This is will be the final game for the Matadors before going on their holiday break.