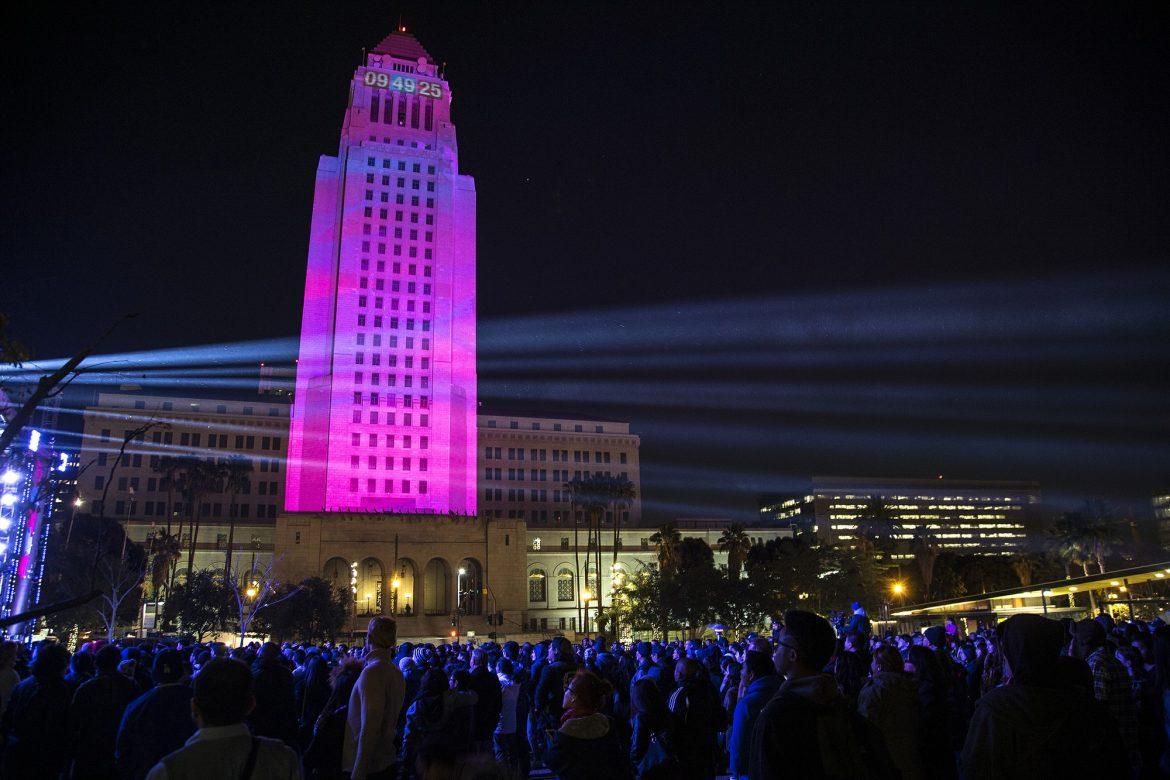 Los Angeles City Hall is lit up in pink with the countdown clock illuminated at the top as revelers enjoy live music during New Year's Eve celebration at Grand Park in Los Angeles on December 31, 2015. (Gina Ferazzi/Los Angeles Times/TNS)

Battle of the Cocktails @ Baldoria

Putting a spin on a Battle of the Bands-type competition, two bartenders will duke it out at this Little Tokyo bar to see who reigns the better drink crafter. The cover charge includes a sample of the drinks made in this battle and some food to go with it.

Although Christmas has passed and light displays are a winter staple across the nation, it’s not too late to see the massive light show at Riverside’s Mission Inn. The annual event transforms the hotel into a festive scene with almost 4.5 million lights brightening up the night.

The food truck craze continues to captivate the public and North Hollywood’s Regional Library will host a variety of trucks offering tasty treats for every palate. While there is no charge for admission, guests are left to fend off the costs of their meals on their own.

One of the legendary musical artists who died this year will be remembered at this David Bowie tribute show. Bowie’s contributions to the music industry will be celebrated as bands cover songs from his lengthy career that started in the 1960s and continued into the 2010s. Lineup includes Gateway Drugs, Glam Skanks, The Blessings, Bonnie Bloomgarden, Frankie Clarke, Laena Geronimo, Jeff Fribourg and Modesto Cobian.

A classic from Hayao Miyazaki’s career of Japanese animated films, “My Neighbor Totoro” follows two young sisters as they discover spirits in the forest near their new home, including Totoro. The film will be presented in its original Japanese voice acting with English subtitles.

Say goodbye to 2016 and get ready to ring in 2017 with this New Year’s Eve celebration at Grand Park in downtown. In addition to live music and the traditional countdown to the approaching year, projectors will display photos taken from on-site photo booths and a new, interactive twist on the countdown thanks to 3-dimensional projections.

Another free New Year’s Eve celebration can be found at Marina del Rey’s Burton Chace Park. This end-of-the-year celebration features multiple firework shows, one for ringing in 2017 when the east coast enters the new year, and another when the west coast catches up.

The Autry National Center will open its doors free of charge on the first day of 2017 to usher in the new year.

The long-running annual parade kicks off 2017 on the second day of the year instead of the usual first day due to a rule of the parade never happening on a Sunday. A tradition that is known for the use of only plant-based material to decorate the exteriors of each float, this year’s theme celebrates success and the ways people help each other achieve it. While there are ticketed seats, parade-goers can camp out for a spot along the route for free, and the whole event is televised as well.

A follow-up to the Rose Parade, this other New Year’s tradition is another highly-anticipated Pasadena-based event. This year, USC and Penn State will face-off in what is considered one of the most well-known college football bowl games. Catch the game on live broadcast, which is more cost efficient compared to trying to track down pricey tickets for the day.

For all the artsy types out there, this exhibit is a collection of works produced throughout the Surrealism movement from the 1930s to contemporary times. The curated work covers over 50 artists, most who were part of the original Surrealism scene.

This double feature follows an interracial couple’s fight for their right to marry in “Loving” and a takes a turn to a religious cult-themed thriller in “Midnight Special.” While it’s free to attend, given that an RSVP was made, seating is not guaranteed to all who register, so sign up early.