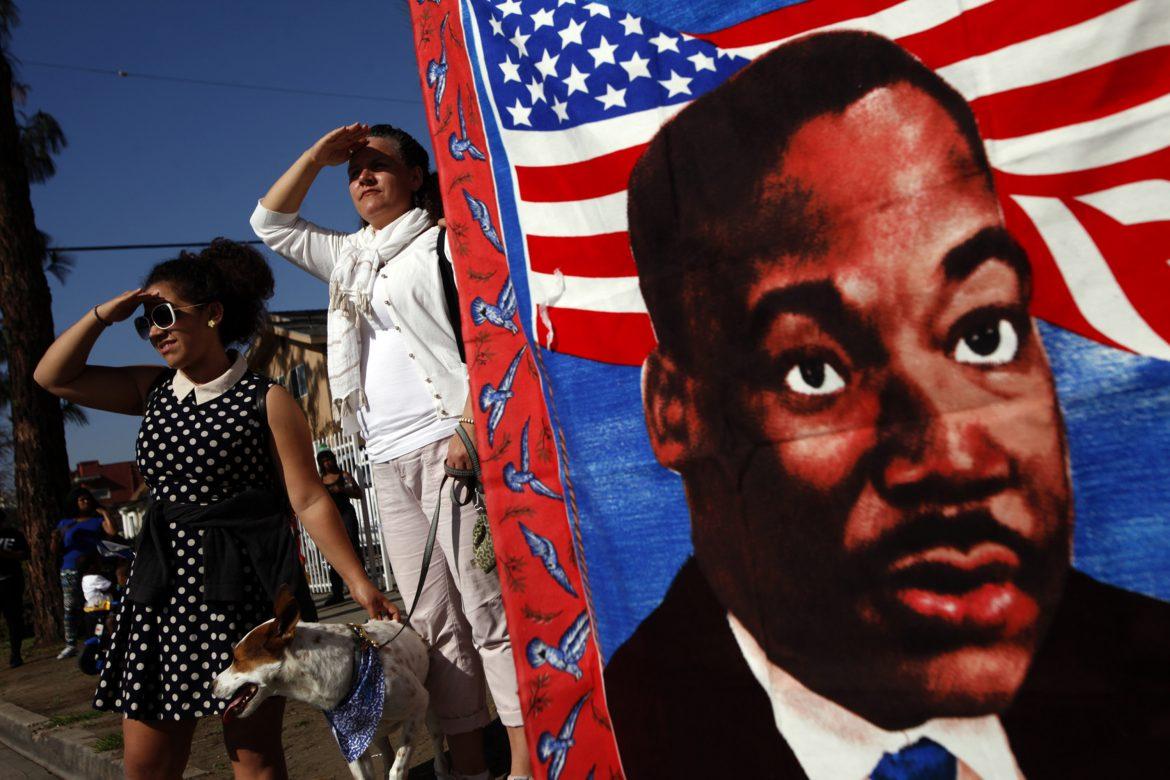 Sequoyah Madison, 23, and her mother Kimberly Madison shield their eyes from the sun while watching participants in the 30th Annual Kingdom Day Parade in Los Angeles on Monday, Jan. 19, 2015. (Genaro Molina/Los Angeles Times/TNS)

In honor of Dr. Martin Luther King Jr. Day, LACMA will offer free admission to museum guests, except for special exhibits. There will also be free live music and art activities related to celebrating King and his work.

This concert is a weekly production that happens every Monday with new artists and one resident DJ. This week there will be performances by Tashaki Miyaki, Low Hum, Lee Dewyze, Rooms, and DJ Sets by Pretty Sister and Hit City DJ’s with KCRW’s Chris Dourdidas.

Free with RSVP done through the website, which closes the day of the event.

The Rise of Sequential Art @ The Last Bookstore

The Last Bookstore is holding a discussion with Matt Kennedy about his book and the world of comics.

The longtime rapper who has worked with Mos Def, Kanye West, and Pharrell, will perform some of his classics and his latest music at the Belasco Theater in Los Angeles.

This comedy event is put on by the United Citizens Brigade Theatre. It is a Seinfeld-inspired sketch and improv show.

This exhibit blends artistry and news media together by showcasing artists who have used mass media as inspiration for their work. All the pieces at the exhibit serve as commentary for the role of news organizations in society.

As a way to support the civil rights of women, minorities, the LGBQT+ community, and more, there will be marches in most major cities across the US, including in downtown Los Angeles by city hall. The march will begin at Pershing Square and end at city hall.

RIOT LA is a comedy festival that includes a range of comedians and improv acts. The performances will happen at multiple venues (which can be found here) that are spread out throughout the L.A. area. Tickets are $20 and up, depending on the performer.

Get some fresh air, exercise, and overlook the San Fernando Valley as you are led on a walk through Topanga Canyon and learn about the unique qualities this trail has to offer.