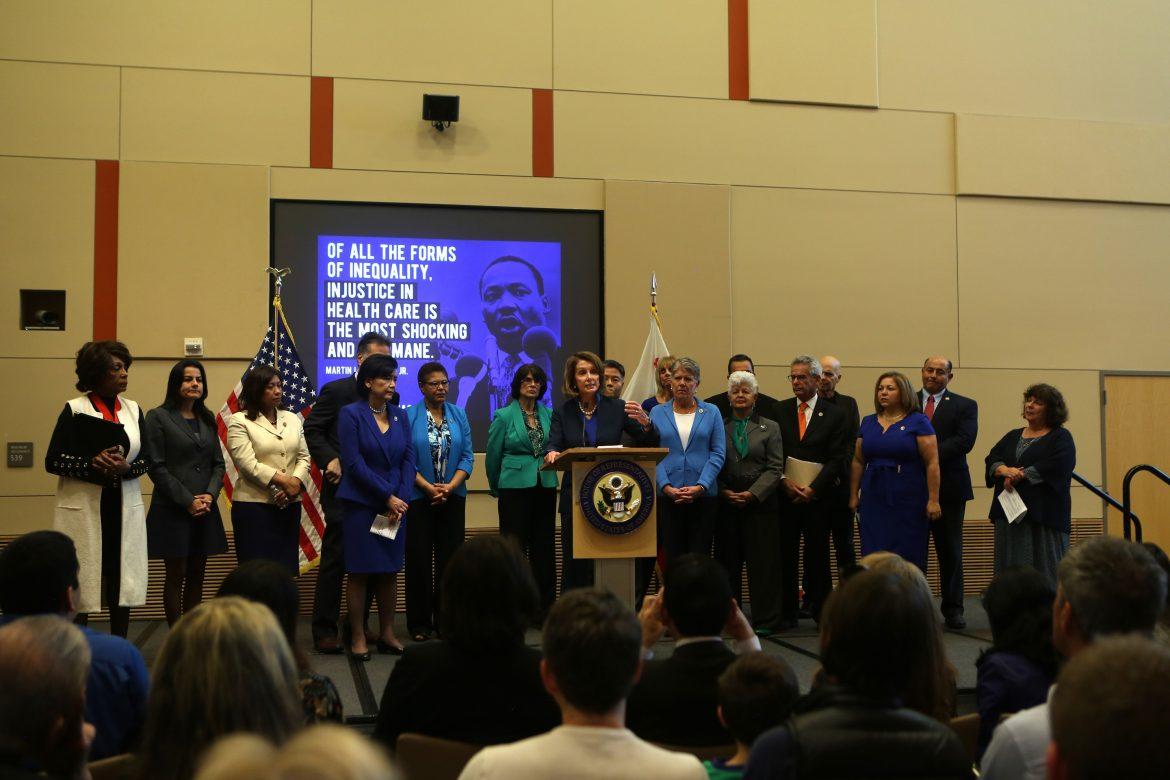 Democratic House minority leader Nancy Pelosi and members of the Los Angeles Congressional Delegation take the stage at an event to protect Obamacare.

The Los Angeles Congressional Delegation hosted the “Faces of Obamacare: Healthcare is a Human Right” Monday in support of the Affordable Care Act.

Republican leaders have been against the Affordable Care Act, also known as Obamacare, since it was signed in March of 2010. Just last week, Congress passed a budget resolution which will fast track the repeal process of the Affordable Care Act. With a new administration taking over the White House, it could very well become a reality.

Louise McCarthy, president of Community Clinic Association of L.A. County, said jobs are at stake and our economy is at stake, which balances on the Affordable Care Act and the expansions that we have made.

Some of the lives at stake were those of Doug Lunn and Patty Amado, special guests who shared how Obamacare has impacted their lives.

“You never think these things will happen to you, thanks to my coverage I go the care that I need,” Lunn said.

Patty Amado is a widow of a former employee for the city of Los Angeles. Amado and her son stopped receiving benefits from the city after her husband died. Once she signed up for Covered California Amado and her son were finally covered.

“I ask you please to keep the Affordable Care Act for my family and other Americans like us,” Amado said.

To preserve the Affordable Care Act, Democrats have held many similar events across the nation. In a symbolic act, the event was held on Martin Luther King Jr. Day to highlight the injustice of repealing Obamacare. A quote by Dr. King was used as the theme of the event:

“Of all forms of inequality, healthcare is the most shocking and inhumane.”

Rep. Lucille Roybal-Allard (D-Downey), the host of the event said it was irresponsible to repeal the Affordable Care Act when Republican leaders have yet to introduce a plan that will “repeal and replace.”

“Repeal and Replace is not realistic because we haven’t seen yet what they would do” said Pelosi about a potential Republican plan to replace Obamacare. “But we hope that they do not reduce the number of people who are covered, not increase the cost and not diminish the benefits.”