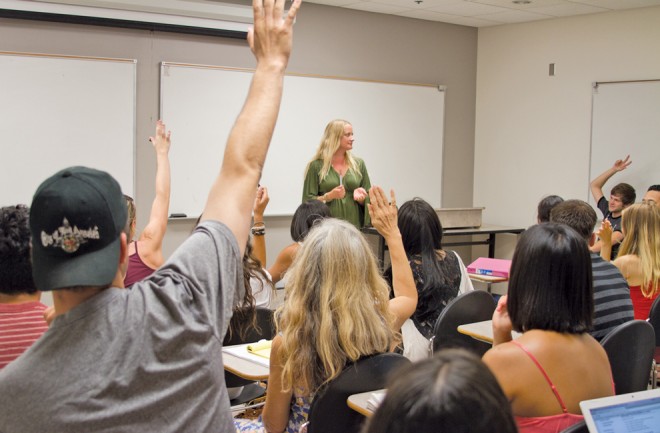 Students raise their hand after professor Jeanine MingÃ asks who would like to add her communications course. Photo Credit: Tessie Navarro

CSUN has added several new majors to its list of impacted departments in order to control the amount of incoming students and better manage the resources available to current students.

“[Impaction] is something that, based on our growth in numbers, made sense to do,” said Louis Rubino, health sciences department chair. “We do recognize the the growth that we had cannot be sustained, due to limitations in space, budget and the number of faculty.”

According to Rubino, the health sciences department’s goal is to maintain the same amount of students they currently have, not to drastically decrease, which is the university’s overall goal.

The biology department’s plan is to decrease majors by at least 100 students each year over the next three years and reduce their number of students from 2,200 to 1,800, which according to department chair Larry Allen, is all they have funding for.

However, both Allen and Rubino have credited the university’s administration for aiding them in hiring additional faculty and providing the necessary funding to be able to manage the increase in students over the last several years.

Students have had to adjust to the increasing class sizes. Psychology, a major that has been impacted for several semesters, has had very high competition for classes, according to students.

Nick Argana, a graduate student pursuing a master’s degree in psychology, recalled waiting an extra semester during his undergrad year to take his capstone in behavioral analysis because the course was already full by the time he was able to register.

“It’s usually pretty hard to get classes in [the psychology department],” Argana said. “I remember a few times where I’ve had to just take an elective or second choice because I couldn’t get the class I needed.”

Each impacted major is limiting the amount of students they admit based on the individual needs of the specific field of study.

“It’s unfortunate to have to turn away students, but we have to work with what we can until our funding situation changes,” Allen said.