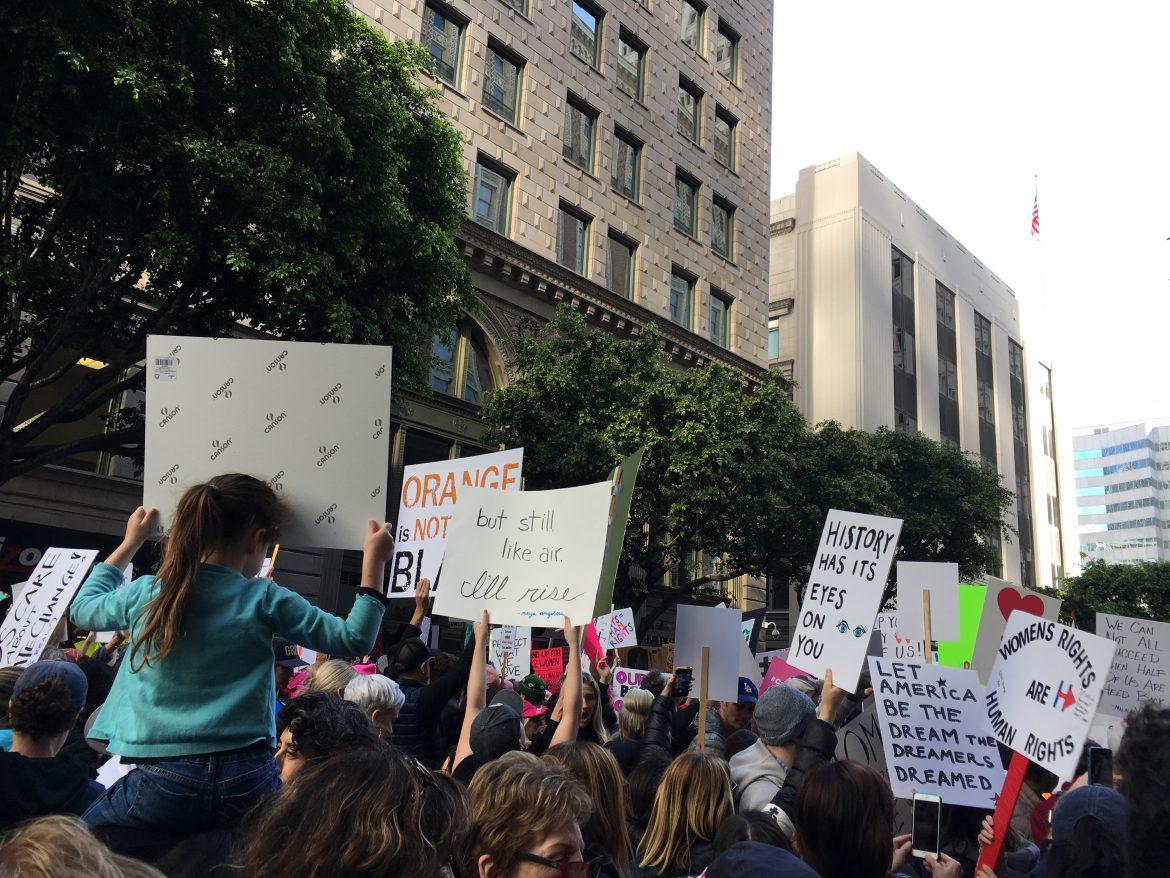 Hundreds of thousands of Angelenos took to the streets on Saturday to voice their commitment to women’s rights and their opposition to Friday’s inauguration of Donald J. Trump, carrying signs criticizing Trump’s sexual assault record and declaring opposition to his controversial policy shifts.

Estimates of the crowd’s size went as high as 750,000 according to event organizers, which would put it as the largest protest amongst others in Washington and New York.

Shira Brown, a CSUN professor, and Women’s Research and Resource director was among those participating in the march, which started in Pershing Square and continued to Los Angeles City Hall. She said many of her students and colleagues attending were concerned about the future.

“I have a daughter and a son, actually, who are young and are watching the world change before them,” Brown said. “And for me, it’s really important that they see that people can participate in various sorts of ways to get their voices heard, and I want them to see that.”

The crowd downtown, which included celebrities such as Jane Fonda and Miley Cyrus as well as a man dressed as Batman, carried signs with slogans such as “Girls just wanna have fun-damental rights (sic).” Others compared Trump’s relationship to Russian president Vladimir Putin with that of two lovers.

As with previous marches, demonstrators focused on a variety of issues likely to be affected by Trump’s presidency, such as climate policy, reproductive rights, and immigration.

“We’re not sore losers,” Fonda said while addressing the marchers. “But we recognize that we’re facing an existential crisis, and because of climate change for the first time in human history, we don’t have time left. And what we need to do is going to be harder because he was elected to office. That’s why we’re angry, we’re not sore losers.”

Protesters spread around downtown as the day progressed, and while the event was scheduled to last from 9 a.m. to 4 p.m. Union Station was forced to close Saturday night as passengers continued to exceed capacity levels.

According to Brown, CSUN’s women’s center is currently educating itself on how to deal with new policy changes, as well as collaborating with the campus DREAM Center and Veteran’s Center. She recommended that students who want to take action attend campus town hall meetings, the next of which will be on Jan. 31 at noon.

“All sorts of things can happen from marching. I guess most importantly just feeling that you have a place to make some noise if you’re feeling that you’re not being heard elsewhere,” Brown said.