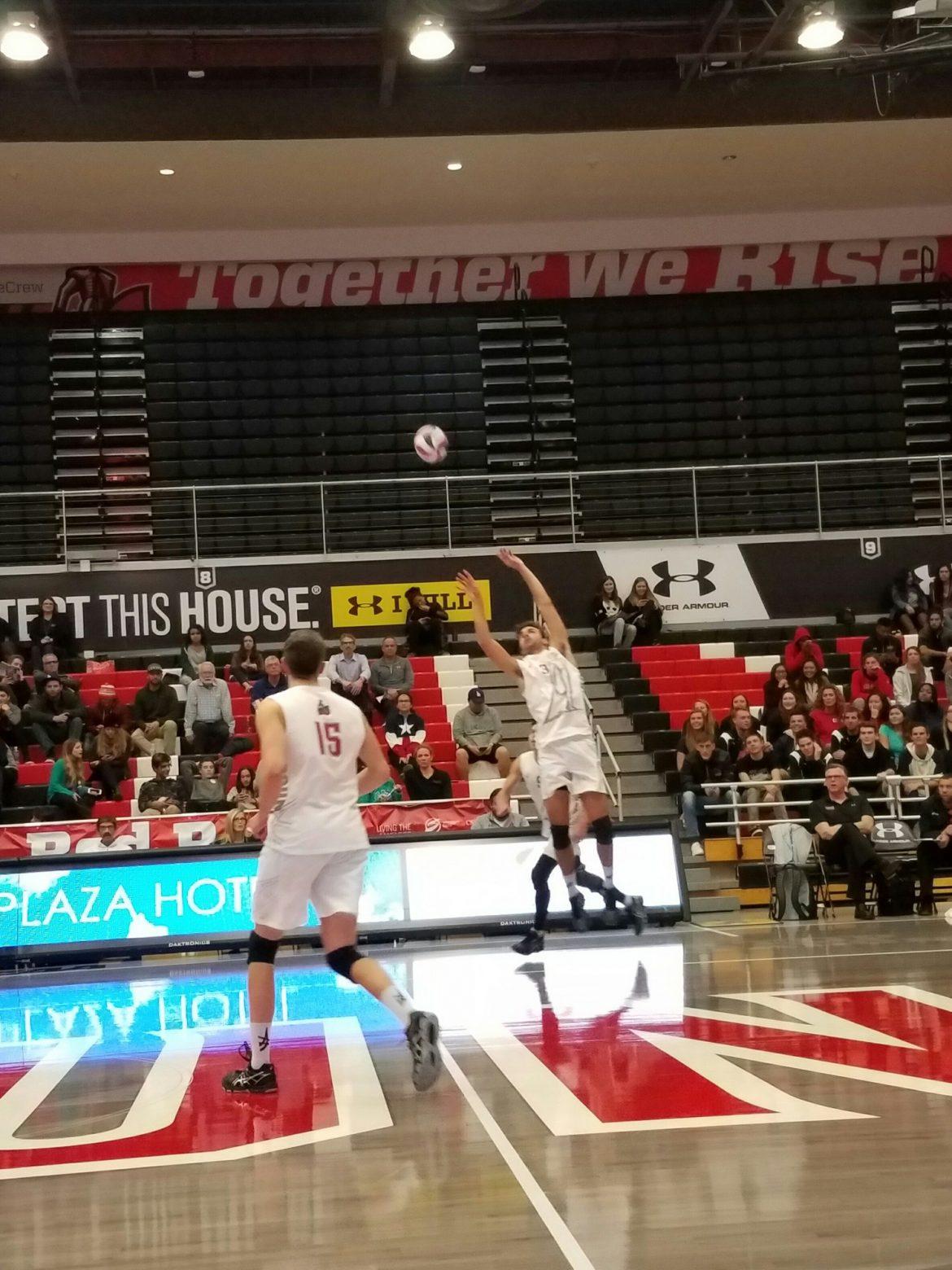 CSUN men's volleyball sets up the ball to get it over the net and score over the Kingsmen. Photo credit: Tera Trujillo

The game was off to a fast start as both teams continued to rack in points. The Kingsmen were able to stay within a three-point range of the Matadors due to six service errors and three reception errors from CSUN.

However, with a .385 hitting percent and a rally of 11-16, the Matadors clinched the lead. Sophomore Dimitar Kalchev had seven kills, which doubled his season average of 3.62 and three digs during the first set. It was red shirt freshman Parker Maki that got the dig to make it 22-25.

The Kingsmen finished the set with three service aces and hitting percent of .042.

The second set began again with steady scoring, 4-4, from an attack error by Matador sophomore Schylar Lillethorup and a service error by Kingsmen freshman Kelly Jew.

It was from an attack error by Kingsmen Jamal Balkhi that caused the Matadors to begin gaining momentum with an 8-13 run. At the second Kingsmen time out, the Matadors had a hitting percent of .409 while the Kingsmen had a percent of .000.

It was a great kill by sophomore Justin Toth to set the score 16-24, followed by a kill by Maki to end the second set with a victory of 17-25.

The Matadors entered into the third and final set of the match with yet another close scoring start.

It was two back-to-back blocks by the Kingsmen that kept the score one point apart at the beginning of the match. The Matadors were able to rally with a roof by Toth, Maki and Lillethorup followed by a kill from Maki which put the score at 12-15.

“We just had to focus on our side of the court and not worry about theirs,” said sophomore Sam Porter. “Our passing has definitely improved and we have been working on full serves.”

Maki did just that with a huge save to assist the Matadors in scoring a point to further their lead 13-17. The Kingsmen, however, turned around and rallied due to an attack and service error by the Matadors followed by a kill from Kingsmen Michael Campbell.

Kalchev responded with three kills making the score 18-23. It was Kalchev again who closed the match with two back-to-back kills defeating the Kingsmen 19-25.

The Matadors take on Hope International at 7 p.m. in the Matadome today.