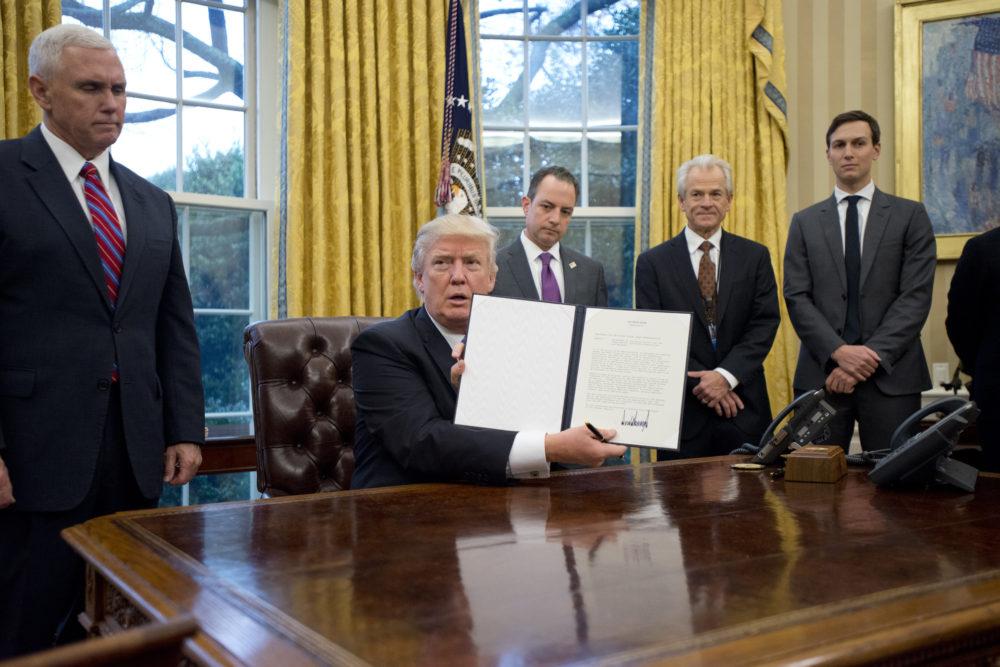 U.S. President Donald Trump shows the executive order withdrawing the U.S. from the Trans-Pacific Partnership after signing it on Monday, Jan. 23, 2017 in the Oval Office of the White House in Washington, D.C. Standing behind the him, from left, U.S. Vice President Mike Pence; White House Chief of Staff Reince Preibus; Peter Navarro, director of the National Trade Council; and Jared Kushner, senior advisor. Photo Credit, Ron Sachs/Pool via CNP/Abaca Press/TNS

A week since being sworn in as the 45th president of the United States, Donald Trump has taken full advantage of his authority as commander in chief by signing a slew of executive orders.

Nevertheless, Trump was able to achieve one of his main campaign promises on Monday Jan. 23, when he signed an order to withdraw the U.S. from the Trans Pacific Partnership (TPP).

“It’s what people wanted,” said President Trump on his decision to remove the U.S from the TPP. “It’s one of the reasons I’m sitting here instead of someone else sitting here. I think it’s something I’m good at.”

According to Time magazine, the TPP is a 12-nation trade deal Trump had criticized as a candidate because he believed it did not help American workers. The 12 nations that make up the TPP include: Japan, Malaysia, Vietnam, Singapore, Brunei, Australia, New Zealand, Canada, Mexico, Chile and Peru. All of these 12 nations account for 40 percent of the world’s economic production, according to an article on BBC.

According to BBC, the pact was meant to deepen economic ties between all 12 nations by eliminating tariffs. However, the opposition of TPP would most likely benefit big business and other countries at the expense of American jobs, according to the article.

Tariffs between Mexico, U.S. and Canada were eliminated under NAFTA, which allows easy trading between the three nations. Trump plans to improve upon the current trading deal since it has increased trade on agriculture and manufactured goods.

Trump was set to meet with the Canadian prime minister and Mexico’s President Enrique Peña Nieto, next week to renegotiate NAFTA. However, Trump has created tension between Mexico and the U.S. due to his insistence that the Mexican government pay for the infamous border wall. Moreover, Trump’s threat to tax 20 percent on Mexican products in order to pay for the wall, has challenged the trade deal between the three nations.

Recently, Trump made the first step to crack down on illegal immigration by threatening to cut federal funding for sanctuary cities, as well as an executive order, which set out a plan to begin construction of the wall along the U.S. border with Mexico.