Editorial: The reality of America first 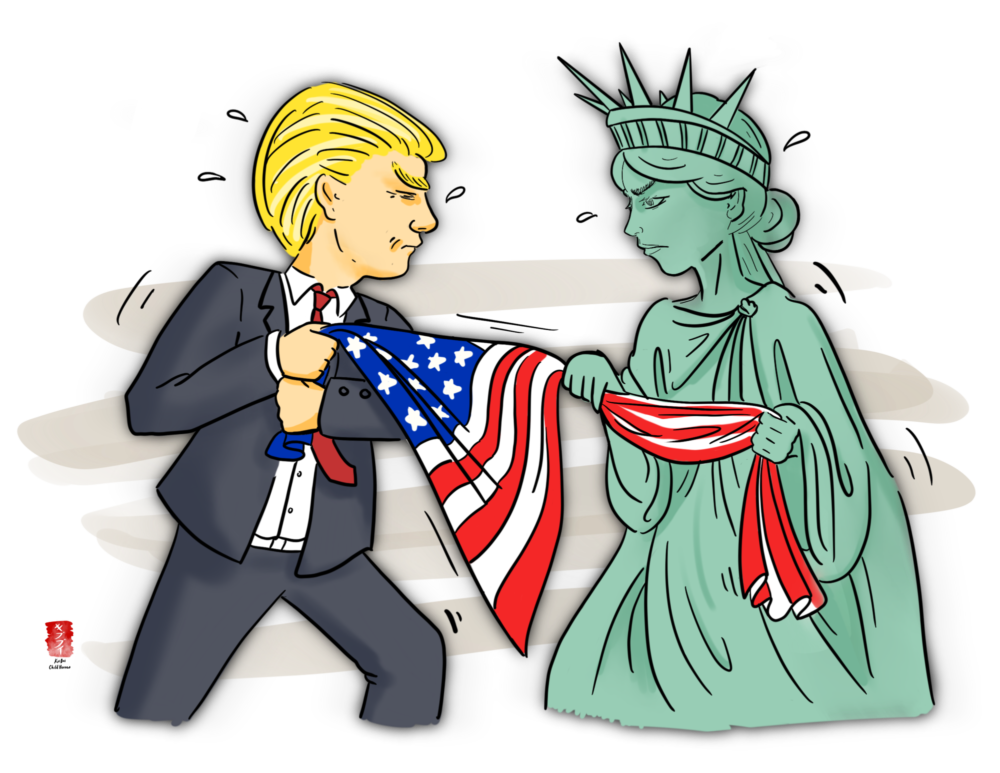 Trump claims he will put "America first," but this may come at an expense. (Illustration by Kiv Bui)

On Inauguration day, our “Leader of the Free World,” President Donald Trump, said “from this day forward, it’s going to be only America first.” Thus, this rally cry of “America first” will transcend his rhetoric and dictate the policies and political decisions of the next four to eight years.

The concept of “America first” can resonate amiably with the majority of people. After all, the phrase dates back to a longer populist rhetoric.

Trump holds the idea that America is exclusively its citizens, but this is becoming an obsolete conception of what America is. America should include its potential citizens, refugees seeking asylum, the millions of undocumented immigrants who work, live and raise families within our country’s borders, and students from foreign nations that come to immerse themselves around our culture. Lady Liberty calls for all: the tired, the poor, the huddled masses yearning to be free.

Therefore, the president has a responsibility to uphold all of America first, not just the certain percentage of the country that he considers to be “America.” If Trump’s presidential duty is to prioritize America, then it must include the thoroughly broad conception that America is more than its borders. America does not represent the executive orders Trump has recently signed.

Trump’s demands to renegotiate NAFTA suggests an isolationist trend that ignores America’s crucial position as a globalized nation. Our economy and our people rely on the economies and trade of other nations. Furthermore, his policies and propositions in regards to immigration stand against what the title of “Leader of the Free World” is supposed to reflect. In refusing Syrian refugees, building a wall between the US-Mexico border, and signing an executive order that sets up an extensive vetting system which prevents citizens from seven foreign nations from entering the United States, Trump desecrates the motto of freedom and opportunity that our nation has held since its inception.

In accordance to Trump’s vision of “America first,” our nation will have to bear the costs that will inevitably follow. For instance, Trump’s executive action to advance the Dakota Pipeline comes at the expense of American’s natural land and the communities of people that live off that land. The expenses that America faces in regards to Trump’s isolationist policies will be the loss of legacy that America holds, as being a nation where immigrants can find safety. Trump’s idea of a safe America is at the expense of America itself.

Yet, the America that should be prioritized is much greater and diverse than the context of the“America” that Trump speaks of. America, in all its complexities and integral communities, will bear the strain that Trump’s “America first” actions create.