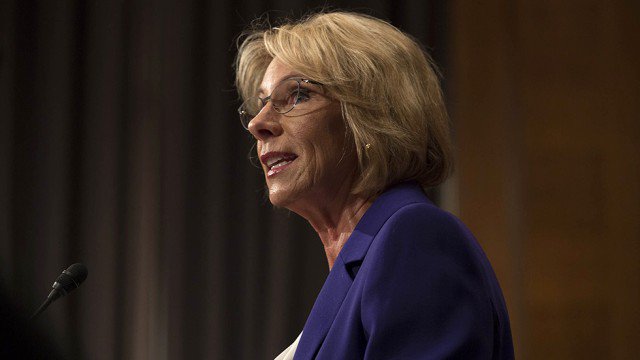 The Campaign for the Future of Higher Education has expressed discontent with the nomination of Betsy DeVos for Secretary of Education.

In a statement, the CFHE, which is an organization made up of faculty, students and community groups across the nation, outlined their disagreements on their website with the selection of DeVos and how her appointment could negatively impact the public education system.

According to the CFHE, evidence suggests that DeVos will refuse to support millions of current and future college students on college access and affordability.

The statement also touched on DeVos’s lack of qualification to hold the position referencing the answers she gave about issues like Title IX and Individuals with Disabilities in Education Act during her confirmation hearing.

When asked about Title IX, DeVos indicated that as Secretary she would refuse to ensure that existing campus sexual assault prevention and response processes are respected and improved, according to the statement.

Lillian Taiz, a spokesperson for the CFHE and history professor at California State University Los Angeles, said everyone who is a member of the CFHE feels this nomination is “massively wrong-headed,” even for California educators who support charter schools, which DeVos is an advocate of.

Taiz said if DeVos is appointed, education groups will hold her accountable.

“If anything she does is harmful to our students; we’ll do something about it–protest. We’ll make some noise,” Taiz said.

DeVos’ lack of education experience is not the only hesitation that many have towards her appointment. DeVos is also facing criticism after a reporter from the Washington Post pointed out similarities between some of her answers to confirmation hearing questionnaires that seemed similar to statements that should have been attributed to several government officials.

Although senate Democrats have been stalling to confirm DeVos, CNN reported Friday morning that the senate has moved forward with her confirmation process. The final vote will occur on Monday.

Taiz encourages those who wish to oppose the nominee to use their voice.

“Students, faculty, staff should continue to make sure that they are picking up the phone and calling their congressmen and getting connected so they hear your voices—to fight back,” Taiz said. “It’s not gonna be safe to sit back and watch what happens. This will build momentum.”